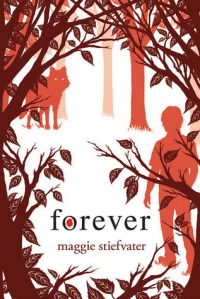 Spoiler warning: Spoilers from the previous two books, Shiver and Linger, but none from this book.

In this conclusion to the Wolves of Mercy Falls trilogy, the wolves have come under heavy scrutiny. More death has led to more anger, which in turn has led to people trying to pass through laws to kill off the pack with helicopters and sharpshooters.

Like I said in yesterday’s review, I have a difficult time remembering what all happened in this book versus Linger. Some if it is a blur, having read them both pretty quickly and back-to-back. I think I have a fairly good idea, though, and will split this review into two sections, good and bad. Let’s start with the negative.

As you can see, my only real issues with the book is that some things seemed to be unresolved. This isn’t to say they weren’t addressed. Instead, they were addressed, but in a way that seemed to just slide the problems out of the way instead of actually dealing with them. That’s never my favorite thing. Despite that negative, though, this was my favorite of the three books, because:

Good:
– Stiefvater’s humorous writing started to become very apparent in this book.
– The characters became more three-dimensional.
– Grace’s conclusion felt appropriately ambiguous.
– There were real consequences to drastic actions.
– That includes death.
– I generally enjoyed the move from supernatural love story to environmental tale about hunting wolves with helicopters and sharpshooters (which does happen!).

In other words, the book sort of diversified, in character, tone, and theme, and it became far more balanced than previous books (especially Shiver). Overall, I enjoyed the series, more with each book. It didn’t live up to the Raven Cycle, but I honestly wasn’t expecting it to, and comparisons aside, this trilogy stands up very well on its own.

3 Responses to Forever, by Maggie Stiefvater