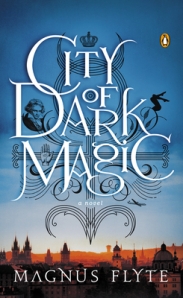 This is my favorite book of 2013 thus far. It’s so creative and so much fun, flying across a dozen different genres, with a plot and characters so ridiculous the book should be ludicrous, but it doesn’t take itself seriously, and is very well-written, which makes it all work in the end. I loved it so much I read it twice, and then put it on my wishlist to own. Really, Conan O’Brian’s blurb on the front cover sums it up best:

This deliciously madcap novel has it all: murder in Prague, time travel, a misanthropic Beethoven, tantric sex, and a dwarf with attitude.

That’s City of Dark Magic. One hell of a fun ride! I applaud the imagination(s) that created it.

Note: I didn’t write nearly enough in my initial reflections on the book. I adore it to pieces, and have since acquired my own copy of it. The one big thing I noted while reading was the sex in the book. I’ve always been particularly sensitive to the way sex is portrayed in literature, and I really hate the stilted language that I’ve seen from Harlequin-type romances, as well as the sex-is-mundane treatment from modern “literary” books. When you start talking about members and wet passages, it just sounds so silly that the sex scene ceases to be in the least bit intriguing, and I don’t think “sex is boring” is a profound (or accurate) statement. I like well-written sex scenes, and the ones in this book? They’re fabulous. They’re descriptive without being stilted, evocative without anything silly, and fully explored without cliché. This was the first time I can remember ever reading a fully-described sex scene (ie not one that fades to black) that is well-written and mood-enhancing instead of mood-killing. It was awesome. Now of course, the book is great for more than just the sex, but I was just so surprised at the way the sex was handled that I had to make note of it here.

1 Response to City of Dark Magic, by Magnus Flyte