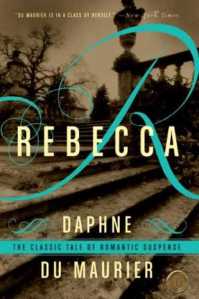 When the unnamed narrator of this story meets Maxim de Winter, whose wife drowned and left him a widower a year previously, she doesn’t imagine that he will ask her to marry him and take her back to his home, Manderley. She expects even less to find the servants indifferent, the neighbors curious, and the head maid, Mrs. Danvers, downright hostile. Least of all, she doesn’t anticipate the spirit of outgoing, headstrong, forceful Rebecca – Maxim’s first wife – to lurk around every corner, judging her, laughing at her, creating an impenetrable barrier between her and Maxim.

Amanda: Wow. Okay I first want to say that 1) this is the best classic I’ve read in a good long time, and 2) I regret not reading this 10 years ago when Jason first told me I should! Then again, I don’t know if I would have appreciated it as much then. I’d have been the around the same age as the narrator, and I don’t think I would have understood her as well. Her hesitancy, her shyness, her fears, her uncertainty – when I was 20, I might have been real sarcastic about her, not willing to admit that I felt that same uncertain hesitance about life sometimes. But now, it’s easy to look back and recognize her moods as ones I might have once had. What did you think? Were you able to connect with the narrator?

Trish: I agree with you on #1 because this book really has me itching to read more classics–this will definitely be a classic that I recommend to hesitant readers. But with #2, I had no idea that this book or du Maurier even existed until last year. I heard of it through blogging! du Maurier, where have you been all my life? In terms of the narrator, I mostly felt achingly sorry for her. I can understand her hesitancy, her shyness, her fears, and even her uncertainty because I’ve been attacked by insecurity in my life. She was so overshadowed by the magnificence of Rebecca that her perceptions of reality began to be colored in a way. Even with her relationship with Max I wasn’t totally convinced he loved her. What did you think of Narry and Max’s relationship?

Amanda: “Narry” – I like that! I didn’t know how to refer to her, not having a name and all. As for their relationship – I didn’t totally buy it, either. I think he cared about her, but I think he was too distracted to really care. I think he will grow to love her. Then again, I didn’t think she really loved him, either. I guess I just saw it as a marriage of mutual help to each other. They both had things they needed, and gave each other those things. It was easy to think of it in those terms, because du Maurier wrote the book in that whole old-fashioned gothic atmosphere. I kept forgetting that it didn’t take place in the 1800s. They’d be acting all gothy, and then they’d get in the car or turn off the electric lights and I’d be jolted back to their present. That makes it sound bad, but I loved it. That was my favorite thing about this book – the writing. Just gorgeous. What did you enjoy most?

Trish: What did I love most about the book? That’s a tough one. du Maurier does do a great job with the atmosphere and even though I also found myself wanting to think that this book took place a lot earlier than it did (set in the 20s, right?), I was most often jolted back to the time frame with the conversations and dialect. I found this especially with Rebecca’s creepy cousin Favell and Maxim’s sister Bea who seemed figures of pop culture at the time. du Maurier really drew her characters well and gave each their own personalities and style. Except for a few household characters who blended into the background, each character really came alive. The most memorable character for me is Mrs. Danvers. She’s so complicated and utterly tragic, and even though she doesn’t play a large role in the book as a main character she definitely has a lot of creep factor. What did you think about the characters in the book? Any that you’ll be remembering for a time to come?

Amanda: I agree that Mrs. Danvers is probably one of the most creepy characters I’ve ever read! Two scenes with her in specific really made me shudder in horror. I think you’re right, all the characters were fantastically drawn, but I think Mrs. Danvers and even Rebecca, despite being dead, were the best. It begs to be compared to modern horror books, which don’t seem to realize that creepy can be achieved without a lot of blood and guts. du Maurier left so much to the imagination, and used so many psychological tricks on her characters to make them nightmarish, though realistically so. It was just perfect.

Okay – so I have to ask, because I’ve harped on this in recent reviews – what did you think about the crime aspect of the novel? I don’t want to reveal spoilers, so all I’m going to say is that a crime takes place at one point, and the characters are trying to escape justice, and they feel the crime was justified. Do you believe it was justified, and that they were justified trying to escape punishment? I have to admit, even though normally I would automatically answer NO, I really empathized with these characters and wanted them to go free.

Trish: Well, let me put it this way–when I read your paragraph I immediately thought “crime? what crime?!” Does that basically answer your question. Yes, of course a crime was committed and it was a horrible crime. Can it really be justified? I think you start stepping into some pretty soggy ethical ground when you begin debating whether or not the crime should be committed. Look at us dodging these spoilers–if I hadn’t already read the book I’d want to now!

You’ve asked a really great question, Amanda, and I don’t think I have the answer. The moral side of me wants to think that there could have been other actions taken before the crime was committed to have prevented the whole mess that occurs in the second half of the book. In the end, though, I just don’t think it would have been quite the same if the characters had all been carted off in handcuffs at the end of the book. Throughout the book Maxim exclaims that Rebecca has won–as if the two were in constant battle during their lives together. In the end, do you think Rebecca did in fact win or have the others gained the upper hand?

Amanda: I think in the end, neither really gains the upper hand. In one way, sure, they got away with the crime – but do they ever really go free? They’ve lost so much, they have such heavy hearts, and with that abrupt end (Agh!!!), you never really know if they recover. The little hints at the beginning of the book say almost nothing. I suppose, in conclusion, I really thought this book was masterfully pieced together. It’s ethically grey, it’s romantic and tragic both, and there is no clear conclusion. Not to mention the incredible atmosphere we talked about above. I can’t wait to read more by du Maurier! How about you? Any final thoughts?

Trish: I think you sum the book and your feelings up really well. I was a little concerned going into the book that there would be a lot of heavy imagery and that the story would be a little dull (those first two chapters were a beating!), but in a word this book was exciting. At any given point du Maurier only allows you to have just one little piece of the puzzle so that things slowly begin to come together, but she withholds a lot from the narrative in order for readers to make up their own minds with what happens. And like you said, this book really is a psychological thriller. I love that there are still questions left at the end–Rebecca really is a haunting book. I’ll definitely be reading more du Maurier in the future and am glad to have discovered her.