City of Ember, by Jeanne DuPrau 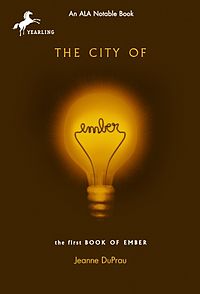 The two main characters in The City of Ember, Lina and Doon, are twelve-year-olds who have just been assigned their jobs in the city of Ember. Ember is a city that lives in complete darkness, with lamps to light up the “day” during certain hours. It’s the size of a small town, and no one knows anything about the outside world. Supplies are running thin, the lights start going out, the generator and plumbing system are dying, and people are starting to panic. Lisa and Doon, through a series of events I won’t discuss for spoiler’s sake, find clues that suggest there may be a way out of Ember.

This book touches on many themes: religion and hope, rioting and fear, political corruption, moral and ethical issues, the root of life, and so on. There’s a lot shoved into this kid’s book. It’s DuPrau’s first novel, and I was very impressed. For a girl who was extremely bored of reading today, who opened several books in the last couple days and couldn’t get past page 15 on a lot of them, this really broke through my mood and shined. It was fun, it had some depth, and it was different from other dystopian/post-apocalyptic novels I’ve ever read. This felt fresh and new.

Writing. Family. Books. Crochet. Fitness. Fashion. Fun. Not necessarily in that order. Note: agender (she/her).
View all posts by Amanda →
This entry was posted in 2008, Children's, Prose and tagged speculative. Bookmark the permalink.

3 Responses to City of Ember, by Jeanne DuPrau