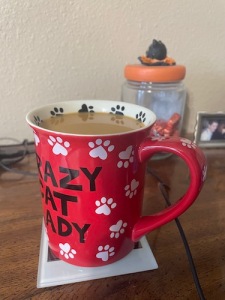 I’m honestly not sure when I last talked about Lord Grey on this blog. Brief recap: Lord Grey was a kitten when we first saw him in early August 2021. We tried to lure him and trap him in order to socialize him and save him from feral life, but after a couple days, he disappeared and we didn’t see him again. Not til late Feb 2022, that is. When we first started seeing a bunch of new feral cats in our yard, displaced by nearby construction, I started putting out food and set up video cameras to try to evaluate what we needed to do to get the situation under control. Lord Grey was the first cat to partake of the food, and immediately adopted our yard as his home base. We did trap him and take him in to be TNRed, only to discover that someone had already gotten him fixed, but not ear-tipped or microchipped or anything. He was definitely a feral cat, not an indoor/outdoor pet. So we allowed him to become our responsibility, feeding him twice a day, as he got more comfortable around our yard. 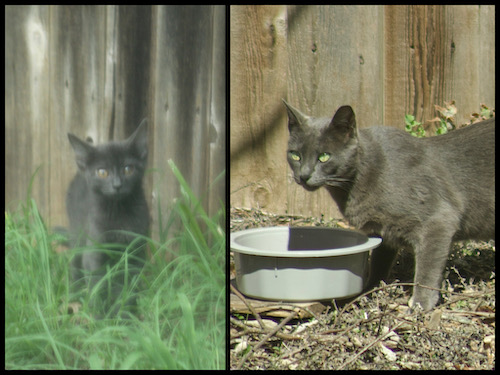 Comfortable around our yard doesn’t equal comfortable with us, however. The second he would see one of us, he would run right out the hole in the fence and hide until we were gone. Only in the last month or two did we notice that when Jason brought food to him, he would run out the hole and immediate stick his head back in to watch from a safe distance. Only in the last month or two did he allow me to go out onto our deck and watch/film him as he ate, rather than running away. After eight months, that was progress! 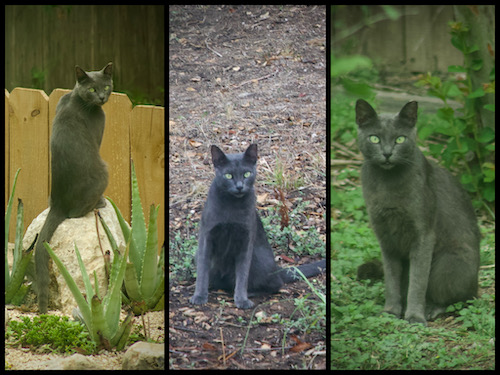 However, just this month, Lord Grey has made astonishing strides in trust, and given me hope that we may one day have a closer relationship with this baby.

First, back on the third, he chased a squirrel up onto our deck. It’s the first time (that we know of) that he’s been on our deck, and after the squirrel got away, he decided to stay. He was very interested in our cats, who were watching him out the back french doors, and he didn’t even run when I brought out my camera and began taking photos of him. He saw me pet our cats, which I honestly think is what brought on a bit more trust for these later incidents. 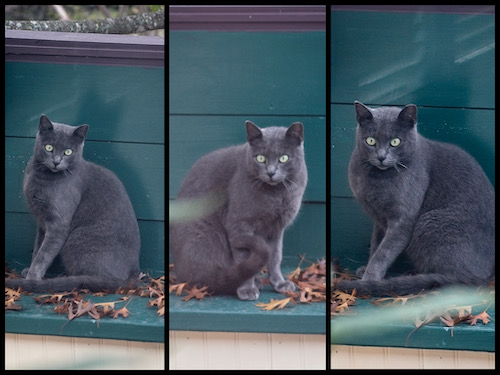 About a week later, when I went to give him his afternoon food, he didn’t run to the hole in the deck immediately. He watched me approach, gave a big stretch, and then walked over to the next tree between his food bowl and the hole. There, he stopped, and he just watched me as I fed him. It was literally the first time ever that he hasn’t left the yard when one of us fed him!

Since then, I’ve tried to take every afternoon feeding super slow. I click my tongue at him, rattle his food so he knows it’s coming, walk slowly, etc. He has taken to retreating in stages, and most days he stops just at the hole in the fence, which is a few feet further than the tree where he stopped the first day. However, this past Thursday, not only did he stop at the tree, but 1) he didn’t even run to the tree until I was five feet from him, despite him watching me the whole time, and 2) he mewed at me several times while at the tree. I mewed back at him, and we had a conversation! 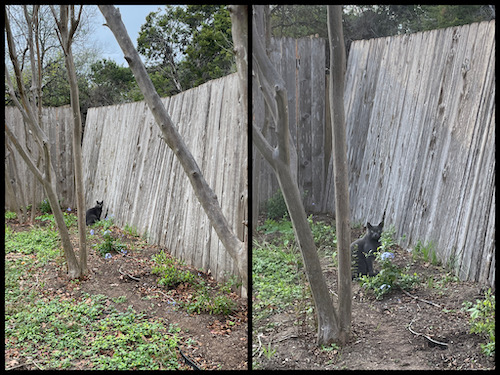 (left: standing by the hole; right: halfway between tree and hole; no pics yet of him at the tree, but he’s stayed there twice now)

Y’all, this is BIG. If you don’t know, feral cats do not use meowing with humans. To communicate with humans is a big step forward in trust, and I found out that it’s even more than that. With me, he used this really high-pitched meow, and when I told Jason, he was surprised, because a few times recently, he’s also mewed at J – only his meow was low and croaky. It’s like he’s imitating the voices that we use to talk to him. Jason feeds him in the morning and when he talks, his voice is croaky and froggy. I talk to him in the afternoon, in a high pitched baby voice. Lord Grey is mimicking us as he tries to communicate. Oh my heart!

I really do hope that one day we can help this baby to fully trust us. We want to be able to give him love and make sure he is safe and healthy. A few months ago, he showed up with these weird scrapes all over his fur and we didn’t know if he’d gotten scraped by a physical object, sheering hair away, or if he’d gotten into something like ringworm or mange. (No blood, just lighter, scalier patches on his fur.) There was no way to treat the latter, though, and thankfully the scrapes grew out so it seems like he just had some hair sheered away. We want him to trust us enough to treat any injuries or illnesses, to give him shelter on cold nights, to get pets and love (as he seems to be a solo kitty, lacking any community to shelter with). It’s been almost a year since we began feeding him daily, and we’re finally making progress!

Agender empty-nester filling my time with cats, books, fitness, and photography. She/they.
View all posts by Amanda →
This entry was posted in Personal and tagged Sunday Coffee, the ferals. Bookmark the permalink.