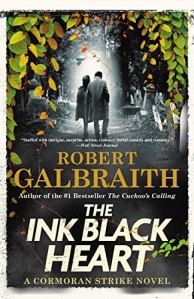 When cartoonist Edie Ledwell is murdered, Cormoran Strike and Robin Ellacott are hired to find the identity of Anomie, the anonymous fan who has spent years torturing Ledwell online.

Yes, the author of this book is horrible, and in this particular book, she’s made a feeble attempt to whine about her own fandom turning against her online. She can claim otherwise and pretend that the book isn’t about her, but frankly, she used that excuse up with the last book, so no one is buying that bs. I debated whether or not to read this book, because she’s just so gross, and chose to do so under the same guidelines as I’ve chosen to read other authors. Many authors – especially of classics – are problematic, and yet I haven’t stopped reading their books. With modern authors, I’ve made it a policy not to begin reading new-to-me authors who are squicky. If I’ve already read and loved books by an author and then they turn squicky, I evaluate individually. In this case, because I loved the Strike series long before Rowling showed her true colors, I’ve decided to continue.

So. Ignoring the problematic author, I want to start by saying that this book was sooooo much better than the last volume in the series, which was written slapdash and meandering and scattered. The Ink Black Heart is longer, but feels half the size, because all the different parts come together well and the pacing is spot on. It’s clear that Strike and Ellacott are entirely out of their depths trying to figure this one out, and their progress is slow and painful at times, without ever reading slow and painful, if that makes sense.

The difficulty they’re running into, of course, is that they’re trying to track down an anonymous person online who has done a masterful job at hiding their identity from any kind of computer tracing. Anonymity is a major theme of the book, and honestly, the thing I liked best about it. Because despite Rowling having a whine about her fandom picking apart her beloved HP world and turning on her personally, the things she discusses in this book are the real problems of anonymous social media: internet trolls, and radical fanatics popping up in seedy corners everywhere. It goes into alt-right hate campaigns, white supremacist groups, the incel community, and violence against women, people of color, the disabled, Jewish folks, and anyone LGBTQIA+. There’s also a look at people who feed on social causes to win clout for themselves, exaggerating claims and capitalizing on folks’ knee-jerk reactions to -isms.

This last bit is where Rowling trips up a little. Because yeah, there are definitely folks out there who build themselves up online by exaggerating their illnesses, or claiming that their ideas were stolen by others, or picking apart popular media to the point of absurdity. Most people with invisible illnesses aren’t pretending, though, and they spend a lot of energy fending off the people who believe they are (including doctors!). Most people who spot problematic issues in popular media aren’t pointing thing out to attack the creator, but to bring awareness to biases we may not even realize exist. How do we learn and get better if we don’t examine these things?

Rowling’s bitterness at being called out on the fatphobia, antisemitism, ethnocentrism, and (so many other) inherent problems in the Harry Potter series becomes really clear, though, when she mimics the same call-outs for Edie Ledwell’s cartoon, The Ink Black Heart. There’s one character that speaks sense about it all, saying that Ledwell may not have meant for her cartoon to depict these things, but “we all need to examine our unconscious biases, right?” Bravo to that character! He’s exactly right! Except then, it turns out he’s one of the vilest kinds of human beings out there, undermining (if not entirely negating) the good things he says. Because any potential true criticism of the author must be brought down a peg or two, yeah?

By the end of the book, here’s how I felt: First, Rowling is a giant piece of sh1t who needs to sit back and do some really deep soul searching and personal education. Her biases and whining and poor-me attitude definitely peek through from time to time in The Ink Black Heart. On the other hand, 95% of the book could be read as if from an entirely different author, one not inserting themselves into the narrative. It was a fascinating, repellant, and alarming look at the way hate groups, conspiracy theorists, and extremists are using the internet as echo chambers to bolster their beliefs and create strength in numbers. As someone who personally fears the current rise of neo-n@zis, incels, and christian extremists, and who lives in a country that is a hotbed of these folks, the novel reads like warning bells. I can absolutely understand why people are skipping it, either due to the author or simply not wanting to read more about this kind of thing than we already see in the daily news. I, however, really enjoyed the book.

Performance: I love Robert Glenister, who reads these audiobooks, and thought he did a great job with it as usual. However, I don’t recommend this one on audio, or at least, not solely on audio. Many of the chapters are written as chats within a specific online game, and can happen up to three simultaneously. Glenister, of course, has to read them one by one, not simultaneously, and there are broad hints revealed in how these conversations intertwine that you simply can’t get on audio. Additionally, twitter feeds, tumblr posts, and youtube comments are often written out in sequence, and Glenister has to read every word, including the @ addresses in twitter replies and such. When you scroll through twitter, you learn to take in only the info you need, rather than every single character written down, so hearing it all spoken out got a bit confusing – a lot of extraneous info. I found that looking over a hard copy made the book much easier to understand during all of the social media portions.