The Kittens and the Ferals

Obviously, the reason I took April off from blogging and why I’ll be only partly blogging in May is because of the newborn orphaned kittens that we took in on April 1st. It is very hard to raise orphaned kittens. Their systems are immunocompromised without their mother. You have to feed them and stimulate them to use the bathroom every two hours in the beginning. You need to provide warmth because they can’t regulate their own body temperature until they’re about four weeks old. They’re blind and deaf at birth, and rely entirely on their sense of smell to navigate the world.

Thankfully, the most stressful part of these girls’ lives is over. They’re a month old, eating more like 4-6 hours apart, no longer need a heating pad (which got better anyway after Animal Defense League gave us a heating pad that didn’t automatically shut off after an hour!!), and have begun using the litter box. They’re walking, wrestling, pouncing – little drunk wobbles as they gain more coordination every day. Their eyes and ears are open so they’re no longer blind or deaf, and they’re loud, screamie babies as bottle-fed kittens tend to be.

Shai is growing into a huge dilute tortie/tabby mix. At her four-week appointment at ADL, she was already 1.6 lbs, the size of a six-week old kitten. She’s very solid, and I wonder if she shares the same father (or father’s family) with Ghost. Hulud has always been smaller than her sister, but still weighed in at 1.3 lbs for her four-week checkup. She looks just like her father (King), and will probably look very similar to Angus and Gherkin as she grows up. The big difference is that she’ll probably be a longhaired or at least medium-haired cat. Shai is also looking to be medium-haired, but it might be too early to tell.

These girls are going to make the best pets for someone one day. We’ve already signed the surrender papers for ADL, and at eight weeks/two months, they’ll go into the shelter for spay, vaccines, microchips, and adoption. It’ll be sad to say goodbye, but I know we’ll have done everything we can for these two little bundles of joy, and I hope they find the best home!

Meanwhile, I have news about Shai and Hulud’s three siblings. Their mother, Tippy, is a community cat who is part of a pair fed by a woman who lives near us. Just last week, Tippy began bringing her kittens to the porch with her when she was ready to eat, and introducing them to this neighbor as a source of food. They all survived!! That’s pretty astonishing for community kittens, who only have about a 50% survival rate – it’s good that they have a good feeder. (Also, look how chonky they are!! Even more than their bottle-fed sisters!) When they’re six weeks old, the plan is to trap them to socialize them here at our house, so we can also get them care through ADL and have them adopted out. (This was what we were trying to do last year with the four kittens we rescued, but apparently eight weeks is too old. Six weeks is perfect in terms of weaning and socializing time.) We’ll also trap Tippy and get her spayed at that time, so she never has to have kittens again.

This is the other part of this post – the feral cats. We trapped the one we were calling Lady Grey on April 10th and brought her in for spay…only to find out that 1) he was actually Lord Grey, and 2) he was already neutered. He was, however, a feral cat with no microchip, and the vet thinks that someone once TNRed him and either neglected or botched the ear-tip. So he got ear-tipped and returned home, and he’s been happily traipsing around our yard every day since!

(look at that gorgeous ear-tipped boy!)

A week later, we trapped Easter, Tippy’s companion/sister, because the feeder was worried that she was pregnant. She was. We did the spay procedure anyway. (Don’t come at me. It was more humane to do that than to let her have kittens, and later have to re-trap her and her kittens for TNR. I don’t like it any more than anyone else, but we have dozens if not hundreds of unaltered cats in our neighborhood, so this was by far the better solution.) So Easter got returned, kitten-free, to live out her life safely and happily! 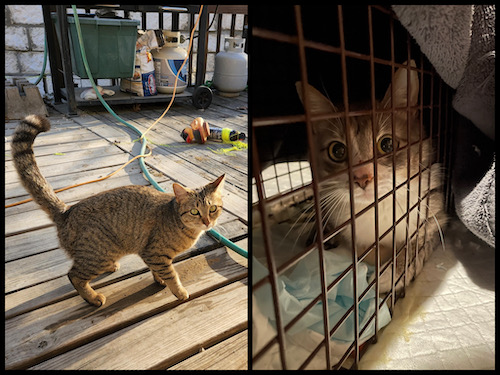 After that, we put out a call to the neighborhood, and have since then trapped, spayed, and released another cat (Becca) who was a recent mom-of-five. (Her babies were six weeks old and already being cared for by her feeder, and her milk was mostly dried up.) I’ve had about another half-dozen calls for help but so far no one has followed up, and frankly, I’m not sure how many people I can assist. The thing is, there are very limited resources for spay/neuter of community/feral cats in SA – less than 50 slots per week for a city of 2.5 million people – so we’ve been going through our regular vet. They offer a discount for services on community cats, but even with that, we’ve been paying between $250 and $400 per cat!! We’re not made of money, and our primary goal is to take care of the colony that’s right here in our part of our neighborhood. All but one of the calls for help were from people far away enough that I doubt their situation is even related to this colony here.

So rather than continuing to reach out, the plan is to set up a covered, baited trap with a camera behind it triggered by motion. We’ve been using the camera to watch the feeding area 24/7 for the last month or more, and it works well. I get a notification every time there’s movement. We won’t trap overnight when I’m asleep, because the most important thing is to get the trap fully covered so that the trapped cat won’t hurt themselves trying to get out. Hopefully by doing this, we can get some of the dozen or so that we see regularly in our yard – especially the boys!!! If we can get King ( –> ), I’ll be very, very happy!

Hopefully as time goes by, I’ll find a way to raise more funds (right now, we’re just asking for people to donate if they can via Venmo (@keshalyi)) and help more people, or find a spay/neuter solution that isn’t hundreds of dollars. Meanwhile, it’s three cats down, many dozens to go…

PS – If you want to see videos of Shai and Hulud, or any of the TNR vids, I’ve mostly been keeping all my media in one place these days, which is my Tiktok.

Writing. Family. Books. Crochet. Fitness. Fashion. Fun. Not necessarily in that order. Note: agender (she/her).
View all posts by Amanda →
This entry was posted in Personal and tagged the ferals. Bookmark the permalink.