I could add up the weeks since I last checked in and see where we’re up to, but I’m not interested in doing so. I’m not planning to return to weekly posts or anything, either. I just had a lot to say this week, so I decided to check in.

On covid in the community:
Omicron is insane, y’all. I want to give some scope and context. When I stopped posting my Quarantine Diaries series in October, our area was averaging 200 cases per day with about a 2% positivity rate. That had been steady for quite some time, and continued to remain so. Right around mid-December, the daily case rate climbed to around 300 cases per day, and the city upped our risk level from Low to Mild. On December 23rd – the last day of full reporting until January 3rd – we were still around that 300 daily average, and the positivity rate was 2.2%. There were five known omicron cases in the county, though it was suspected that the actual number was much higher.

Well, things really exploded from there. The city didn’t do full reporting for that 10-day period, but we heard a few things. Like, for instance, in the four days of Dec 27-30, over 3000 new cases were reported, bringing the daily average up to 750+. A local health/hospital system reported that they were seeing a 31% positivity rate at their location, even though the city didn’t report anything specific. On January 3rd, when reports resumed, we got some new information.

The first three days of January, there were 11,528 reported cases, with each day seeing over 3700, and the 3rd seeing 3900. In 2021, there was only a single day with over 3k cases reported. The new daily case rate – which is calculated weekly, so it includes three days over a holiday weekend when many testing facilities are closed – shot up to 2000/day. The city’s risk level skyrocketed up to Severe, bypassing Moderate altogether, and edging into Critical. The positivity rate jumped from 2.2% to over 27%. We’ve never, ever seen a jump like this. We are fucked. And that was just through Monday! Here’s an updated graph as of yesterday:

Our current daily case rate is 3116 – first time in the pandemic that it’s been over 3k – and we had one day this week with nearly 4500 cases reported – again, the most ever in the entire pandemic, including the one day with a month’s worth of backdated numbers that had been misplaced. There were over 21k cases reported in the city for the first six days of 2022. Yeesh.

On the city/county’s management of the current surge:
Up until now, I’ve been satisfied with the way our city and county leaders have been handling the pandemic. The governor of TX has screwed all the local governments and even all the businesses over, playing Dictator while claiming to be “for the people” and “for personal freedom,” and our city leaders have done their best to work around these restrictions. Until now. Now, it seems they’ve taken their cue from the CDC, whose recent “only need to quarantine for five days” guideline is a frickin’ joke. While continuing to repeat that their hands are tied by the governor and there’s nothing they can do, the city held a NYE party that had 70,000 attendees while they knew damn well just how fast omicron was spreading. I am raging mad about this. They knew better!!

On my family:
There’s not tons of news on this front. My mom continued to refuse hospital treatment even though her oxygen levels kept dropping to 80%-ish. She’s now on like four different kinds of steroid treatments, and my stepdad bought her an oxygen tank so that she can treat herself from home. She’s got more energy thanks to the steroids, and I think she’s finally healing. It looks like she’s probably going to have some long-haul symptoms, though. I’m just glad it was the “mild” version of covid. Beyond that, I’ve heard that one of my uncles and my grandmother are pretty much recovered, and another uncle – who is probably the one who got covid first – is still struggling with fluctuating oxygen levels. My mom doesn’t update us often on them, though, so that’s all I’ve got at this point. I don’t doubt that they’ll all still refuse vaccination after this. Sigh.

In further news, one of my sisters just let us know that her husband came back covid-positive today. The two of them are vaccinated, though not boosted yet (her husband was scheduled to be boosted this weekend), but they have three children aged 7, 5, and 2. I thought the older two were vaccinated, but I’ve found out now that she was waiting until they knew more about longterm side effects. We do know they’ve all been exposed. I have no idea what will happen from here.

On my personal life:
Tbh, I was probably a bit reckless earlier in the week, but in my defense, I hadn’t realized just how bad things had gotten here. I mean, the last numbers I’d heard were 2% positivity rate and 300 daily case average! There were indictions that numbers were on the rise, we just didn’t have specifics. So my hiking group canceled our big journaling event, but I still went to a smaller version with friends. I started a hike with a mask, but took it off when the exertion got to be too much. My vision board party was a group of seven, all triple-vaxxed, and we decided we were probably okay to go without masks. Maybe we weren’t. Maybe that was a stupid idea. I guess time will tell.

But now that I know, things are changing. I have a hike scheduled for Sunday, and 1) I made it a masks-required hike, and 2) I’m not opening it up for a larger group with more than one hike leader (even though there’s others who would qualify for that going). We just need to be more cautious, and there’s some talk that we might cancel hikes for a bit altogether, the way we did twice in 2020. Omicron looks like it’s going to be far worse in terms of spread than any previous surge, and while it’s “mild,” it’s still hurting folks who are immunocompromised or have underlying conditions. (Well, and the unvaxxed, but frankly, they’re gambling with their health and others’ health, so I have no sympathy for them AT ALL at this point. This of course doesn’t include people who can’t be vaccinated for health reasons – little kids and people allergic to the vaccine and folks too immunocompromised for vaccines – I feel for them the most!!) 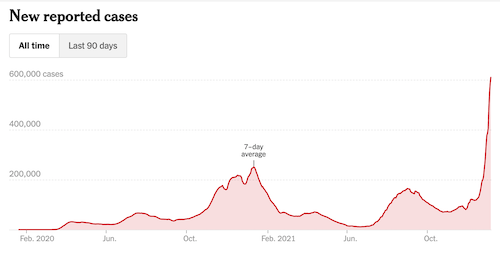 I am “officially” in the immunocompromised category now – it was just presumed before, but the RA diagnosis makes it official – and I can’t take any chances. So I may have to back off from social activities until things are a bit more under control. This makes me sad, but sometimes it’s just what we have to do, and unlike the antivaxxer crowd, I’m willing to do hard things for the good of the community.

Writing. Family. Books. Crochet. Fitness. Fashion. Fun. Not necessarily in that order. Note: agender (she/her).
View all posts by Amanda →
This entry was posted in Personal and tagged quarantine. Bookmark the permalink.