Of all the days we spent traveling, these were my favorite. Western NM is a treat. I didn’t expect that at all, but I absolutely fell in love with the area. I understand now why people retire there.

Day 4 – 9/27
Literally the only thing on the agenda this day was to travel to our vrbo in New Mexico, roughly a 3.5-hour drive. Along the way, we would stop off for lunch on Roswell, because who wouldn’t stop off in the alien capital of the world for kitschy pictures, right? We got to sleep in and leave at our leisure. The vrbo person had already sent us instructions for the house (yes, house!) we’d be staying in for the next three nights, so we knew there wouldn’t be any problems there. 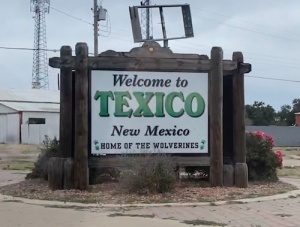 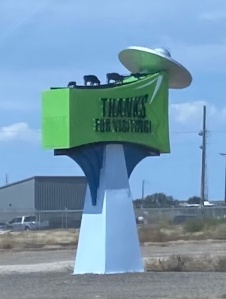 It didn’t take long to cross into a new state, in Texico, New Mexico – a name which had us in stitches. Not long after that came Roswell. We decided to save time by not going through the center of town. Instead, J read me facts about the city – disappointing facts, like one of their high schools’ mascots being the Coyotes, and hilarious ones, like their minor league baseball team being the Invaders. There was little alien stuff on signs and by motels and for sale at those side-of-the-road places that sell metal lawn kitsch. But we couldn’t even buy a stuffed alien at the gas station, so that was disappointing. We also couldn’t find any food besides fast food, so we ended up at Subway. Funny story: I didn’t plan this, but I was wearing my Unsolved Mysteries shirt that day, and two different Subway employees told me how much they loved that show and asked me if I’d seen the Roswell episode with the aliens. Ha! We weren’t even in a touristy part of town! 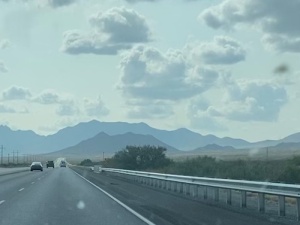 After Roswell, we started to enter the mountains, and the landscape changed completely. I don’t remember which mountains were which – we crossed through the Sacramento and San Andres mountains during this trip – but the first set were covered in a tall pine forest, and both of us were just continually amazed by the beauty. Eventually, the first set of mountains ended, and we caught our first glimpse of White Sands National Park. 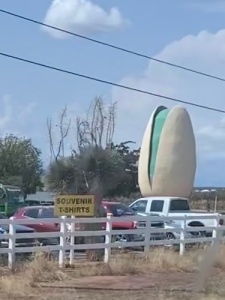 This is where we screwed up. For some reason, when we planned our trip, the maps app showed us the wrong location for White Sands National Park, putting it instead at the Organ Mountain-Desert Peaks National Monument next to Las Cruces, NM. So when we should have been staying in Alamogordo – home of the world’s largest pistachio, which was a disappointing statue rather than, I don’t know, a mutant pistachio that was fist-sized or something – we ended up in Las Cruces, 45 mins away from White Sands. But tbh, I don’t regret this mistake at all. First, it meant going through a second beautiful mountain range (pictured above), this one full of crumbling rocks and scrub rather than pine forest. Second, Las Cruces was amazing, and the house we rented for those three nights – three bedroom, 2.5 bath, view of the mountains in the distance – was awesome, and cheaper than the cost of a normal hotel room. Third, it gave us options for our unplanned Day 6 of the trip, but I’ll get into that later. 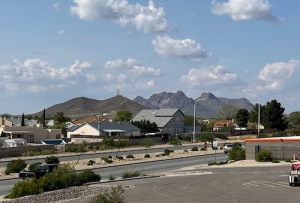 (view from our balcony)

Like I said, Las Cruces was beautiful. I’d always seen those flat, adobe, terracotta houses in movies, and thought that was just a stereotype of the southwest. I’d also seen replicas here in SA (and even up north), and they always looked silly and kinda stupid. In NM, they fit in with the landscape properly, and I fell in love with them in a way I never expected. The house we were in had a curly terracotta roof, a balcony with a good view, and a “yard” of astroturf. We ordered out from a local restaurant that night, India Hut, and had our first non-chain meal in days. It. Was. Bliss. 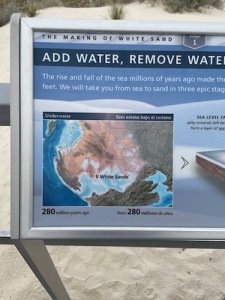 We woke up on Day 5 to the most beautiful weather. A cold front had come through and it was in the 50s out, with no expectation to climb higher throughout the morning. This was our White Sands day! White Sands was my top destination on this trip, and it didn’t disappoint. I’ve talked about the hike itself previously, but I just want to take another moment to express how incredible this place was. I could’ve spent days and days out there. It was an entirely different landscape. Jason, who is interested in the history of things and reads up about them, told me all about how the area formed. I had no idea that it used to be a shore there! So when I said it felt like walking on beach sand…well, it WAS walking on beach sand. Except with no ocean anywhere near. The water table is also very close to the surface, keeping the sand cool and moist just under the surface. 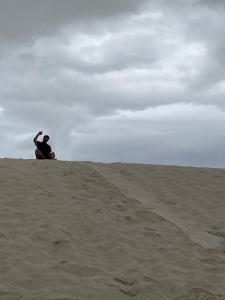 One thing I didn’t discuss in the hike post was the sledding. Everyone told us that we needed to sled on the dunes. When we arrived by the trail we chose, we were literally the only car in the parking lot, but it was clear someone had been there at some point because two sleds had been left behind (grrr!). You can buy them at the gift shop, as well as the wax to make them slide easier, and then sell them back afterwards for part of what you paid. This had been our plan, but instead we grabbed these two that were essentially left as trash. After our hike, we each slid down one of the dunes. Unfortunately, because we didn’t have the wax and because of the on-and-off rain, it wasn’t good sledding weather. We each only went once. But I’m glad we got the experience of it! (PS – We returned the sleds to the visitor’s center, and donated them rather than selling them back.)

One really weird and/or sad thing: I lost my Ouija pin that was on my hiking bag. Several times since I got it, the backs had come off when packing my bag. They were clearly cheap backs, and I intended to get better ones when we got home from vacation. Meanwhile, I simply checked the bag each time I put it on and took it off. This is where it got weird. At the gift shop of White Sands, I got a park pin to add to my collection. I put it on my bag before we even left the park to return to our rental. The Ouija pin was still on the bag. But when I brought my bag into the house, it had disappeared. I only noticed once we were inside, so I thought maybe it dropped off somewhere on the walkway up to the front door. But we couldn’t find it there, or in the driveway, or dropped anywhere in my car. It was just gone. The only thing I can think is that it fell off and someone must have seen it and picked it up? I’m sad it’s gone, though. I really loved that pin. 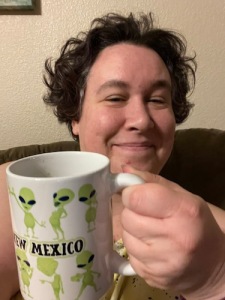 Day 6 – 9/29
So guess what? I didn’t choose a lazy day. Heh. Jason and I headed out to the mountain range southeast of Las Cruces, entering the Organ Mountains-Desert Peaks National Monument. (This was the place that claimed to be White Sands on our map originally.) We’d chosen a trail with a decent slow climb (up about 700 feet in 1.5 miles), and out-and-back with ruins in several places along the way. Again, I discussed the hike itself at the link up above, so no need to go into that. 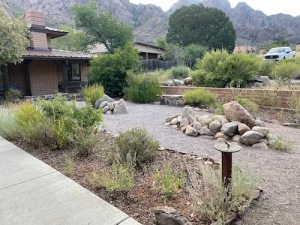 There was a volunteer at the visitor’s center that talked with us for awhile. He and his wife were from San Antonio and Austin, and had retired to Las Cruces. He said it was a great place to retire with a low cost of living, tons of outdoorsy things to do, and just gorgeous. This man was a volunteer at all the local parks, monuments, forests, etc – there’s a lot of State and National areas there – and told us about the search-and-rescue operation at White Sands a few months back. (A man went off trail, got lost, and ended up dying out there before they found him. We’d read about this the day before, and didn’t realize we’d meet one of the volunteers of the search-and-rescue the day afterwards.) 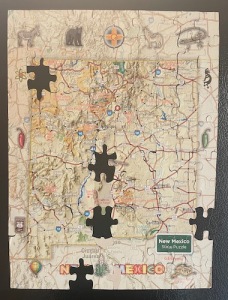 Sadly, there was no gift shop, so no pin for the Organ Mountains, but J had gotten me a New Mexico pin with aliens on it, so I decided to count that instead. (I didn’t get a pin from Colorado Bend State Park either, because everything was closed, so I’m missing more than one from this trip!) In any case, it was a nice day-trip only 15 mins from our rental, and then we had another lazy afternoon. That night, we got Lebanese food delivered from another local place. For a city with a relatively small population (~100k), there was a surprisingly diverse range of places to eat! (This stands out, because our next section of the trip was the exact opposite!)

Favorite photos from these days of the trip:
I have so many great photos from these days, it was hard to narrow down. I’m splitting this into two sections: White Sands and Organ Mountains. (I took no photos except the view from our balcony on Day 4 – I was driving, so Jason took a bunch from the car, and I only count photos I take for my faves!) 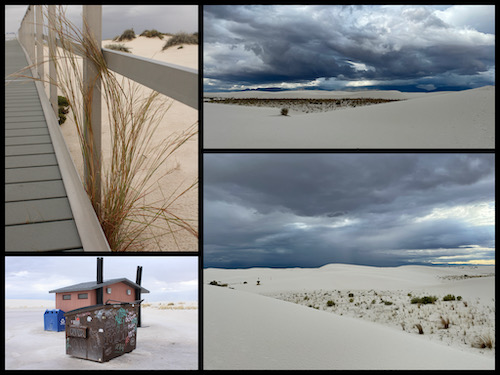 Clockwise from top left: grass growing along the boardwalk; the dunes against threatening skies (x2); the bathrooms, recycling, and dumpster in our parking lot, which stood out against the stark landscape and made the whole place look like we were in another world (also, the graffiti said stuff like “you deserve to be here” and I just love it) 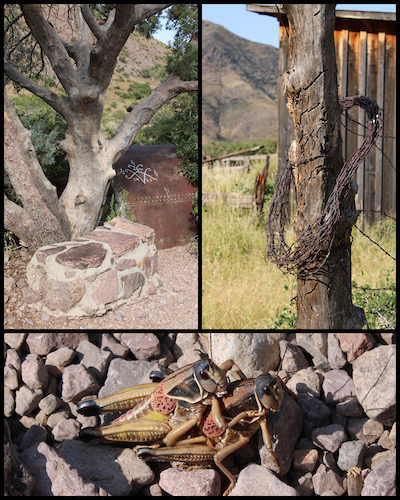 Top left: Someone left this drawing on an old metal container of some kind
Top right: barbed wire by the ruins of a former outpost
Bottom: mating grasshoppers with faces that give off very Thomas the Tank Engine vibes, staring at my camera as if to say, “Rude!” Ha!

Fun stuff along the way:
A few things I didn’t already touch on above!

Agender empty-nester filling my time with cats, books, fitness, and photography. She/they.
View all posts by Amanda →
This entry was posted in Personal and tagged fitness, goals, travel. Bookmark the permalink.