All Our Hidden Gifts, by Caroline O’Donoghue 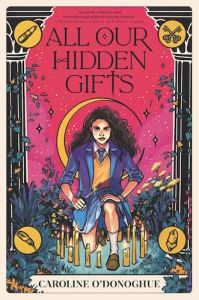 Maeve is a bit of an outcast at school, trying desperately to fit in by any means necessary, even if that means cutting out older, un-cool friends like Lily. Her most recent stunt comes when she discovers a contraband pack of tarot cards and starts giving out readings. A clash between Maeve and Lily occur over a tarot reading, and a few days later, Lily disappears. Now everyone thinks Maeve is a witch, and Maeve is terrified that she somehow wished her former friend out of existence, and a new gang of fundamentalist Christians have begun to terrorize all the people and places that Maeve loves.

You guys!! This book was soooo much fun. The cover looks so cheesy and the writing feels younger than I initially expected, so I didn’t think it would be a book that would work for me. But omg it was so fun. Plus it has just about everything you could wish for – tarot, magic, creepy Christian cult leaders, an exploration of genderqueer identity and community, big sprawling Irish families, and a semi-senile old ex-nun, all set on a background of modern-day Ireland trying to cope with the political and religious changes from the last thirty years. It was the perfect start to the RIP reading challenge (ignoring the fact that 1) I finished a week before the challenge actually started, and 2) I technically pre-started with Survive the Night, boo).

The writing was pretty great, once I got used to Maeve’s voice. Like I said, it sounded younger than I expected. (I think Maeve is around 16, but she sounded more like 14 to me, but then again, it’s an entirely different country/culture so I can’t judge on the standards I grew up with in Texas/US.) But also very pithy. Every once in awhile, she’d pop out with something so on-point that I literally laughed aloud. Like, for example: “Maybe she’s on Facebook. If she was seventeen in 1990, how old is she now? Forty-seven? Definitely on Facebook, then.” Ha! She’s not wrong.

In some ways, the book was a lot like reading a modern-day version of The Craft – a little silly and a lot of fun. In others, there were some very deep thematic elements surrounding religion, divorce, abortion, the LGBTQIA+ community, family (and found family), racism, class divides, and hate crimes. There was some indication throughout that the fundamentalist Christian cult group would end up being minimized through certain actions of the main characters (trying to avoid spoilers here), which would have lessened the book. But instead, the Cult continued on its horrid way, spreading evil in the guise of Christianity, Catholicism, and Irish purity. It was realistic, and incredibly relevant since much of the world is experiencing a fundamentalist backlash these days.

I didn’t realize until the end of the book that there should be a sequel coming out next year. The book is a full story, with a teaser that will lead to something new, and I am here for it! I can’t wait. I think I’ll get the next one via audio, because I’ve listened to a sample of the reader now and love her voice, plus there’s a bunch of Irish words/names sprinkled throughout that I absolutely don’t know how to pronounce. (I only know that Niamh is pronounced Neeve because of another book I read for RIP back in 2014, and I know there are others I’m reading incorrectly.) I imagine this would have made an amazing spooky audiobook to listen to. I might just go back to it via audio one day, maybe to revisit the story before reading the sequel, depending on when the sequel actually releases!

3 Responses to All Our Hidden Gifts, by Caroline O’Donoghue