Survive the Night, by Riley Sager 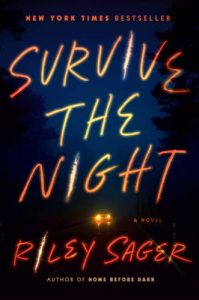 Charlie’s roommate and best friend, Maddy, was killed two months back by a serial killer. Charlie saw the killer, but she can’t remember anything about him. She lives with that guilt, and after those months, she can’t take it anymore. She can’t keep living in the same room she shared with Maddy, steeping in her own guilt for what she did and didn’t do that night. She agrees to a ride-share with a fellow student named Josh, a stranger who happened to be going the same way. Only after they’re driving away into the dark wilderness, some of what Josh says isn’t adding up, and Charlie is more and more convinced that she’s in a car with a killer.

So let me start with the good things about this book. It immediately hooks you. The writing is effortless, the story is good, and the pace is perfect. There’s also an immediate dip into 90s nostalgia, as this book takes place in ’91. Nirvana on cassette in an old Grand Am, passing mentions of Radioshack and other 90s staples. I was never big on 80s nostalgia because I dislike pretty much everything about the 80s, but I can dig the 90s version. I’ll be happy if a lot more books start coming out with that vibe!

Apart from that, though, the best thing about this book is Charlie’s mindset. While the word “schizophrenia” is never used, it’s clear from the very beginning that she has some sort of schizoaffective disorder. Ever since a traumatic loss in her adolescence, she’s experienced what she calls “movies” in her mind, where reality disappears for a few minutes and a more cinematic version plays out for her instead. It happens most when she’s upset or stressed. After Maddy’s death, it gets worse, and she’s prescribed medication…which she stops taking not long before this ride-share. And when you stop taking medication that’s supposed to help with hallucinations? Well, let’s just say your mind becomes very untrustworthy for a time as it adjusts. (Google Risperidone, for instance. It can help control hallucinations and dissociative symptoms, but if you stop taking it suddenly, it can cause a person to develop schizophrenia. !!!)

I loved the idea of a book using an unreliable narrator who doesn’t fully realize she’s unreliable. I loved the exploration of a person aware that their mind isn’t trustworthy, and is warring their instincts. From the beginning, you know that the driver 1) might turn out to be a killer, or 2) might be a harmless guy accidentally caught in the beam of another person’s psychiatric withdrawal symptoms. And I was just eating this up.

After this paragraph, there will be spoilers, because I do want a place to discuss my feelings about the book. In a general sense, I was disappointed by a lot of things – the 90s nostalgia vibe disappears completely, so it becomes a “takes place before cell phones because that makes it easier” book; the so-obvious-you-can’t-believe-they’re-real “twists;” the extremely far-fetched plot devices to keep the story alive. I kept reading, but…meh. Anyway, spoilers ahead:

Most of my disappointment in this book is rolled up in suspension of disbelief (or lack thereof) and the blatant obviousness of stuff. For example, I knew from the first chapter of the book that the most likely person to be the campus serial killer was Charlie’s boyfriend, Robbie. (I mean, the guy casually leaves her to wait for her ride share with a stranger, alone, at night, on a campus that just had a murder.) Charlie only discovers this in a climactic reveal as the two of them are driving away from a burning building in a panic, complete with a WTF moment. (Because Robbie, despite being a super smart serial killer who has gotten away with multiple murders, keeps his trophies and weapons in the glove box of his car, where anyone, including his girlfriend, can easily happen upon them. Really??)

There was also Marge’s identity. While Charlie is all bouncing around in her thoughts about campus serial killers, it’s clear from the moment we meet Marge that if she’s involved, she’s related to Maddy. (I thought it was Maddy’s mother rather than grandmother, but that’s still just about spot on.) Too obvious.

So many plot devices. Charlie nearly escapes multiple times. Each time, she chooses not to for one convenient reason or another that, after awhile, really stop being believable. So many moments of too outrageous to suspend disbelief. Like, for instance, Marge pulling her gun out from where it’s landed in several feet of murky water, and somehow immediately using it to kill herself. Because that’s how antique pistols work when they’ve been submerged, right?

I could go on, but I won’t. It was just so frustrating, because the book started SO GOOD. And then it just fell into some weird corners that were too contrived, too obvious, and too unbelievable, often all at the same time. It was definitely a letdown, unfortunately.