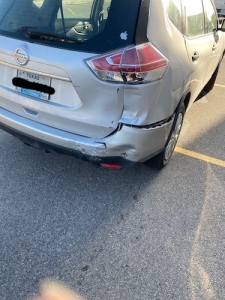 First, there’s this. On June 25, Jason drove my car across town to meet some friends to play D&D. He took my car because he was returning a ladder to one of those friends, and the ladder didn’t fit in his car. When he was almost there, he was hit from behind at a stoplight. No one was hurt. Other than the fact that this broke our car, this ended up being quite the funny story. The guy who hit Jason got out of his car swearing up a storm, yelling that he was so f**king sorry, it was that f**king Ramen place. Because apparently, he saw this Ramen shop that he really hated, and it distracted him so much that he rear-ended Jason. Yes. And then, ironically, the hit made it so that Jason couldn’t open the car to get the ladder out!

Anyway, we took the car to the appropriate service station per the other guy’s insurance, Allstate. And let me just say, Allstate is the worst insurance we have ever had to deal with. It took two days for the service station to add up the repairs (about $5k). Our car is worth about $15-16k. It took ten days for Allstate to decide that the car was a total loss, then another 10 days to send us the money, all after sending multiple emails asking Jason to log into his account (he doesn’t have one) and being unable to even tell us what forms we needed to sign. It was a whole mess of paperwork and stupidity. We finally got paid on July 16, over three weeks after the accident. Notably, 1) Jason’s friend had to come to the service station to get the ladder, and 2) Allstate would only pay for a rental car until two days after the car was declared totaled, even though they didn’t pay us the money for another 10 days. Allstate is HORRIFIC. 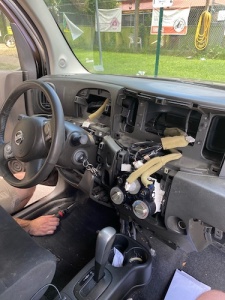 But we’re glad to finally get the money, because:

Second, Thursday, July 15: Jason took Reaper up to Austin to go to her foster home. When he was almost there, he noticed some movement out of the corner of his eye, and saw that Reaper had managed to open the zippers of her carrier almost enough for her to get her head out. He was going to lean down to close it, except then one of those maniac cars going 130 mph down the highway started darting in and out of cars like they were in a video game. (This is very common on this particular stretch of road.) So J was keeping his eye on this car, and trying to reach his hand down to stop Reaper from escaping…but no, she darted out and went straight up the floor air vents and into the dashboard. Sigh.

Jason was almost to APA at that point, and could hear her crying, so he called ahead to make sure they had tools to take apart the dashboard. The above photo is only the beginning of the process. Eventually, they had to take off every single piece of plastic from the front of the car, and on taking off the last one, Reaper darted out and ran under the back seat. Jason grabbed her, where she immediately started purring and snuggling with him, the little princess. So, good news is that Reaper made it out unscathed and the entire crew at Austin Pets Alive knows her personality now, which bodes well for adoption write-ups. The bad news is that they had to get that dashboard off fast, with the engine running, so that Reaper didn’t overheat in the 100-degree day. And after that, the car wouldn’t start. It had to get towed to a Nissan dealership (since it was an electrical problem), and Jason had to stay overnight in Austin. We then paid $600 to get it fixed the next day so that Jason could drive home. Which leads to: 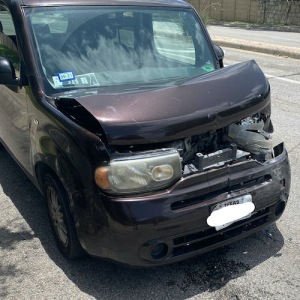 Third, the day after Jason got home, he went to pick Laurence up from a friend’s house. While approaching a stop sign, his brakes went out entirely. He was pumping them and terrified, because imagine you’re suddenly in a large moving vehicle with no way to stop. Thankfully, this didn’t happen on the highway on the way home from Austin, and it only happened in a neighborhood road going less than 30 mph! But he smashed into the car in front of him full force, causing his airbag to go off, and crumpling the front half of his car. Thankfully, again, no one was hurt beyond the scrapes and bruises that Jason got from the airbag. But I’ve gotta tell you, this one pisses me off. That dealership claimed to have replaced all the dashboard parts and re-hooked-up all the electricals, including the power brakes, which is likely what cut out. We did tell all this to the insurance company, but I doubt they’re going to do anything about it. We could sue the dealership, but it’s not really worth the time/effort. We just paid them $600 to potentially kill Jason, and I’m angry.

Anyway, that left us down to zero cars. And we hadn’t been grocery shopping in two weeks because of the hospital ordeal during the previous weekend. And we’re told by our insurance company that we can get a rental car from a specific location, only sorry, that location won’t be open until Monday (two days later). So we’re just stranded, and we suddenly need to replace two cars. 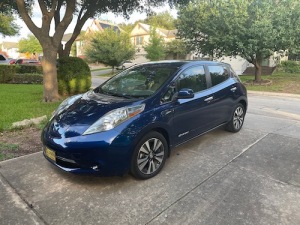 A lot happened very quickly after that. There are 2-3 dealerships in town that we trust, and we began looking at both of them for available cars. Because Jason does mostly in-town driving, we decided to get him an older model electric car. With an hour left til closing time, Jason got a Lyft to the dealership for one we liked, got pre-approved for a good rate, used some of the settlement from my car to have a down payment on this one, and drove the new 2016 Nissan Leaf home. (Above) Then we got a 2016 Nissan Versa Note from Carvana for me, which is set to arrive this coming Saturday. It’s also blue, though more turquoise, so we’re naming them the Blues Sisters, Eloise and Jo (ha!). 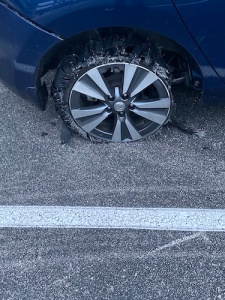 Unfortunately, that’s not the end of the saga. Fourth! And this is ongoing because it literally happened this morning. Jason was driving into the office for the first time since March 2020 when one of his tires blew. Thankfully he didn’t hit anyone/thing, and no one was hurt, but as you can see from the pic, the tire is shredded. We’ve literally had this car for four days and have driven maybe 20 miles on it so far. We’re just thankful that it wasn’t when the kids were in the car! Anyway, there was no spare tire (WTF?) so J had to wait for roadside assistance, which got him to a Discount Tire. All four tires needed to be replaces, plus part of the wheel area of the car. We called the dealership – Gunn Chevrolet – and they denied all responsibility, UGH. Clearly they’ve gone downhill in the past three years since we last dealt with them. We’re still in the process of getting this fixed and getting a rental car if needed. It’s a nightmare and it definitely feels like a curse.

More later, because I can probably safely assume the sage will continue…