Four Days in the Hospital

A few years back, I had a severe pain in my back that turned out to be a kidney stone that had gotten stuck and was causing my kidney to swell. At first, I went to Urgent Care, where they diagnosed it either as “menstrual pain” because I was bleeding, except I knew this was more than just cramps, or “muscle strain.” Like WTF dude, I know what a muscle strain feels like and this ain’t it! This particular Urgent Care had botched more than one thing with us, so after I walked out those doors, Jason drove me immediately to a nearby freestanding ER instead. They took wonderful care of me, and so when I decided to go to the ER on Saturday morning, that’s where Jason took me.

Notes from the ER:

I arrived at the hospital around 1pm and was put in a single room, which given the nature of the infection and symptoms, I was supremely grateful for. (Later, due to a maintenance issue with the first room, I had to be moved to a double, but the second bed was blocked off and I was categorized as “in isolation,” so I had no roommates besides Jason.) Observations from the hospital: 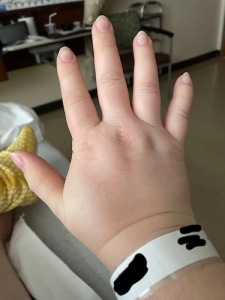 The first afternoon in the ER, I had a lot of extra care because of my sky high blood numbers, as well as some screwy vitals: blood pressure extremely low, pulse super fast at around 130 bpm. I had tons of saline pumped through me. Something like six bags the first afternoon, and even with all that, my bladder was empty. Unfortunately, because of the three-tries-to-get-an-IV-in, the placement was in a weird little vein curve, and I couldn’t bend my right arm at all or it would get kinked and stop flowing. My right arm and dominant hand were rendered practically useless for the next few days, especially as the hand grew so swollen from fluid after a few hours that I couldn’t make a fist or touch my pinky to thumb. My left hand is naturally clumsy, and still recovering from wrist surgery, so it doesn’t bend all the way yet. Let’s just say that that made cleaning up from bathroom trips very difficult and humiliating, and my husband is an absolute angel. It doesn’t help that on top of everything else, I started my period on Saturday, so I was dealing with additional blood and cramps, too. Go, me! 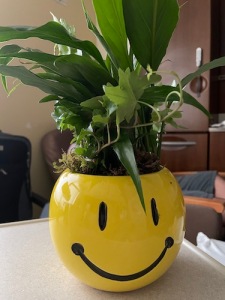 The first two days in the hospital, I was dizzy and disoriented, and too weak to even hold my phone, so Jason was updating family and friends. I am SO GLAD that covid restrictions have eased up in hospitals, because not only was Jason able to stay with me during the day, he stayed overnights, too. I needed so much help. I couldn’t do anything on my own, not even get out of bed, and most of the time, the staff was spread so thin that it would take ages for them to respond to requests for help. Other than Jason, I didn’t want visitors while I felt so crappy, but my hiking gals sent me a wonderful living plant to brighten my room. It made me cry. I mean, I was a mess, so tears were easy, but it was such a thoughtful and sweet gift, and the fact that they chose a living plant so that I could add it to my garden when I got home was just so thoughtful and amazing of these women.

On my second day (Sunday), my cultures came back to show the E. Coli and campylobacter infections. IV fluids and antibiotics continued. I was moved from clear liquids to “light food as tolerated” (I managed to eat two sandwiches that day, that’s about it). In the afternoon, I had my last dose of pain/fever meds. Finally, I was allowed to shower, which was good, because I’d sweat so much during the fevers of the sepsis that my own smell was making me nauseous, ha! In the evening, due to a leaking pipe, I had to move to that new room. 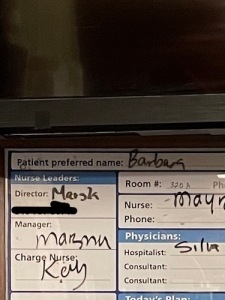 Day 3 (Monday): As my lactose and other blood work had all gone back to normal, I was taken off IV fluids and switched over to pill forms of my two antibiotics, to see if I could stomach them without nausea (a common side effect of both). I had a real breakfast. (You know you live in the southwest when you get a deconstructed breakfast taco in the hospital.) I started feeling well enough to sit up a little and hold my phone for very short periods of time (still too weak for long, and I’d get dizzy if I scrolled at all). I noticed in the morning that my overnight nurse had accidentally written that my preferred name was Barbara on my board, because that had been my day nurse and was written right under my name on the previous room’s board. Ha! 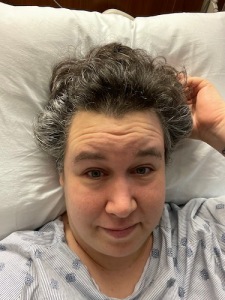 Day 4 (Tuesday): My bloodwork all came back normal, and my vitals were back to normal ranges as well. I tolerated the oral antibiotics fine and was able to eat normal food all the previous day (if at a slow rate), so YAY I was discharged around noon. I looked a right mess – I joked with my siblings that I had Bride of Boogedy hair – but hey, I had healthy color in my skin and I wasn’t waxy and deathly pale anymore! The nurses wheeled me out of the hospital via wheelchair, which made me extremely motion sick (!!!), and so I kept my eyes closed on the way home. (Turns out that dizziness and visual distortion are a common side effect of one of my meds. That explains why I can’t scroll for long on my phone, too. Essentially, I have horizontal vertigo. It’s like I’m wearing glasses with a slightly off prescription, so my eyes are constantly trying to adjust. So no driving for me for the next 10 days.)

Now I’m home, I’m like 90% back to normal, feeling healthier than I’ve felt in weeks, so that’s great. Also: bonus of going into the hospital and being on clear liquids for 36 hours is that you don’t get any coffee, which means that I finally got the kick in the pants I needed to give the stuff up. Yeah, I had a caffeine withdrawal headache on top of every other thing, but I stayed strong and stuck with unsweetened iced tea with lemon to ease the headache. (I’m still not a fan of tea, but iced tea with lemon is actually better than I expected. I wouldn’t want to drink it forever, but it’ll do for now.) I’m now six days coffee-free! Hurrah! And now I just need to finish the ten days of antibiotics, get follow-up care from my doctor, be mindful of secondary issues (like intestinal abscesses or post-sepsis syndrome), and rebuild my gut flora without probiotics since I’m allergic to one of them (heh).

Y’all. I’m happy to be alive. I’m happy to feel better. I’m happy to be home in a better bed with a real shower and real clothes. I’m happy my boys were old enough to look after themselves and the house and the cats for four days and three nights. I look forward to getting my body moving again as soon as the vertigo goes away, and to improving my health in many different ways. All this sucked, but life is better now. I made it through to the other side.

Writing. Family. Books. Crochet. Fitness. Fashion. Fun. Not necessarily in that order. Note: agender (she/her).
View all posts by Amanda →
This entry was posted in Wellness and tagged health. Bookmark the permalink.

3 Responses to Four Days in the Hospital