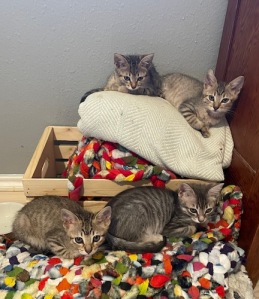 June began in a blaze of glory. Finally out of May and the PTSD time of the year, I felt alive and awake for the first time in what felt like forever. I’m really glad I had that feeling, too, because I think that’s what got me through a month of really tough blows: the death of Dan from RLGS; the sudden rapid neurological decline of my best friend’s husband; a more-than-full-time job of caring for and socializing feral kittens; working to TNR feral cats with little** progress; and some serious injuries, illnesses, accidents, and allergic reactions. Not that there wasn’t good things, too – like Jason’s parents visiting near the end of the month, and the lovely moments as the kittens started to trust us. It was just mostly a month that felt determined to pound my family into the ground, and I’m really happy that I had some emotional and mental fortitude to weather it.

Reading and Watching
In books, June was pretty much consumed with the Murderbot series. I tried and culled quite a number of books from my to-investigate list as well, but the only ones I finished were Murderbot novels. I also saw a few new-to-me movies this month: Soul, Legally Blond, and Cruella – that last one in theatre! 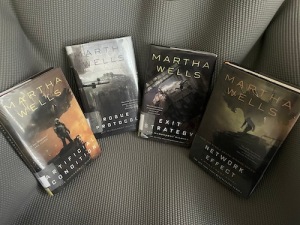 Goals
These have changed. My body has been under assault for months now. I feel horrible. Sick, muddle-headed, in pain, hobbling, all the bad things. My goal for the rest of 2021 is to get myself out of this place, whether by medical intervention or weight loss or some combination of the two. All the rest needs to be set to the side. I’ve said it before: I’ve crossed the invisible line where my body can be obese and still able to move and function to one where I’m in pain and no longer functioning properly. So this is the only focus now: get away from this place! 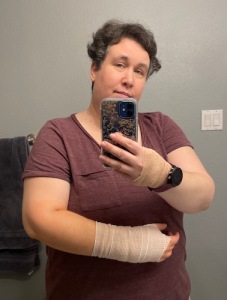 It hasn’t been a great month for health! The good bit: I had my wrist surgery on the 3rd and it went smoothly. The wrist is still not entirely healed – I can’t fully bend it certain directions, the skin/tissue around the incision is very tight/bunched, and there’s still pain in some of the nearby bones. But given that it’s been a month, and the recovery is 6-8 weeks, I’m happy with how it’s gone. The other good bit: I’m now six months insomnia-free!

On the negative side: 1) I have a new surgery scheduled in July to take a biopsy of my small intestine; 2) I either broke or sprained a toe mid-month, giving me another injury to manage; 3) after a month on my new blood pressure meds, I had a severe reaction that almost sent me to the emergency room; and 4) my hands swelled up with hives likely related to the same reaction to the bp meds, and continued to itch and burn and swell through the rest of the month. Yes, I did get off the bp med! Honestly, I’m kinda glad to be off it anyway, because it gave me constant heartburn, made me super sleepy all the time (and muddle-headed!), and started interfering with my sleep patterns because of all the naps I was taking! Sleep has gone back to normal though the heartburn has remained (so far). So has the hive/eczema hands, and the horribly upset digestive system. Ugh.

House
We had to rip out the cabinet under our kitchen sink this month. We could smell but not see mildew, so we knew it had to be behind the cabinets. And it was. There was a small leak back there. Tbh, we kinda just cobbled together the kitchen after that. The closest under-sink cabinet we could find was still slightly bigger than the original, so the sink is now off-center to the window, and we had to get a new countertop. In the long run, we want to redo the full kitchen, so we got the cheapest countertop we could, and it looks like a 90s hotel bathroom. It also sticks out several inches longer than where we did the wood paneling earlier this year, and is missing backsplash at that point. Whatever. I’m so sick of house-repairs that I just don’t frickin’ care at this point! It’s ugly, but the kitchen was already ugly. Oh well. At least there’s no more mold. 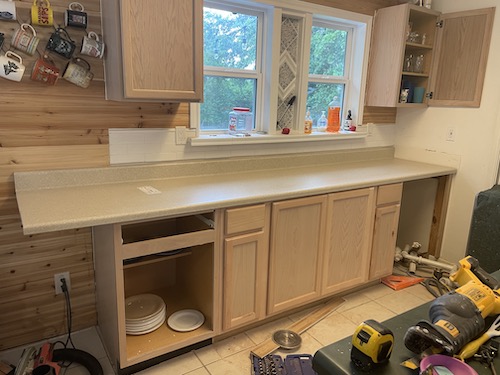 Quarantine
Not much has happened since my last Diaries post. Morrigan had his second vaccine dose, yay! San Antonio announced that they’re seeing more Delta variant than any other, and I’ve heard conflicting reports on how effect Pfizer is against it. So we’re going to stay vigilant about masks in public indoor areas.

Favorite photos
I took hundreds and hundreds of photos this month, probably a third of them of the kittens and another third of various wildflowers in our garden. I also decided to participate in a photo-of-the-day challenge, using a half-dozen different sets of prompts to choose from each day. This led to a LOT of photos to pick favorites from, and honestly, other than a very select (3-4) of the below choices, I might change my mind about favorites in the coming months. As always, these photos are taken by me and aren’t always the best photography, just the pictures I liked most.

Top: Father’s Day at the movies (first movie in theatre since the pandemic began!); a perfect paw print left on my leg (Atticus’s); an unusual breakfast. Bottom: Angus is a lap-kitty now!; gateway to an enchanted land, perhaps.

Highlights of June
My life has been pretty much taken up by medical issues and foster kittens this month, and while there’s been a lot of good in that – I can’t tell you how happy I was the first time each kitten began to purr, or the first time they climbed into my lap – it does mean that the rest of my time was very limited. I didn’t do or see much this month, barely left the house, and so my non-kitten highlights are spare.

Coming up in July
Hopefully things will be calmer. Of course, it’s our secondary birthday month – not quite as many of March’s insanity, but July still has quite a number of them. My next surgery is scheduled for the end of the month as well. Plus there’s the Olympics, and I love the Olympics!! The big thing I’d love is to get the kittens off to a shelter who will find them wonderful forever homes. Then I’d like to rest for a long, long time.

*****
**Re: the TNR stuff. As we’d had no luck with trapping, we spoke with SAFCC and they said to not feed the cats for three days beforehand. We coordinated with the neighbors who have been feeding the colony, but when we went to trap last Sunday evening, there was food out. We wrote to see if wires got crossed, and were ghosted. We wrote again a few times, until finally they told us that we were cruel to starve cats and that they were taking the TNR course and would do the work themselves. Which tbh is what they should have done from the beginning, but whatever. We offered to lend our traps and to give them the food we’d bought, and were told no, go donate our food somewhere else. Rude. Anyway, the ferals are now out of our hands.