A few months back, I decided to try out a few subscription boxes, with the first on my list being Cairn. Cairn is an outdoors-product box that cost $30 for my first two months, and then due to a price change that (I’m told) was entirely coincidental, was $35 for June. I’ll give my overall thoughts after the individual monthly box descriptions. 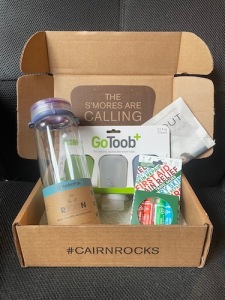 I received my first Cairn box on April 24th. I’ll admit, I was expecting more than what arrived based on what I’d seen online. But let me just go through the products one by one.

HydraPak 25-oz water bottle with carry-handle and twisting lid: Nice idea, poor execution. It’s not insulated, so lots of condensation/sweating. The leakproof lid leaks, and is difficult to use. Also, you know how when you’re drinking from a cup and suddenly the ice slide toward you, and you get water everywhere? That happened even with a tiny sipping hole. I got water on myself nearly every time. Save your money and buy a Hydroflask, they’re worth it. Plus you can put stickers on them. 1.5 stars. 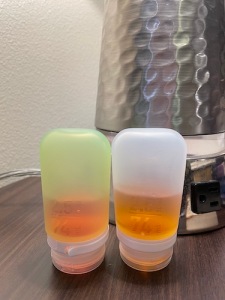 GoToob travel tubes with loop attachments (3): Honestly, I was disappointed on seeing these because you can get travel tubes for a dollar at Walmart. But then I used them when I took that mini-vacation in May. I used one for shampoo and one for honey (because yes, they can be used for food/condiments, too!). They were the perfect size, texture, and flexibility. They had wide mouths for easy filling and cleaning. Best of all, you know how when you squirt a condiment, it always gets messy on the rim? These instead suctioned back in and left no mess! 5 stars.

Green Goo plant-based travel salves (4): The four salves included here were for pain relief, first aid, skin repair, and dry skin. Each of the salves had a pleasant, very-mild (almost undetectable) scent. I’ve used a few – one on my son’s eczema, one on mosquito bites. My son’s response to how his worked was “I don’t remember,” so there’s that, but the one I used on the mosquito bites was amazing! They immediately stopped itching and the effect lasted about 12 hours before I needed to reapply. I’ve put all four salves into my hiking pack. 5 stars. 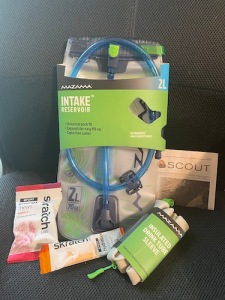 My second package came in on 5/22 and had more in it than I expected, given what I’d seen on my first package.

Skratch Labs energy chews: Too often, energy chews taste awful, but these were actually quite good, with no artificial tastes or aftertastes. They were also small/soft enough to use while exercising. I’ll definitely be on the look out for these for the future! 5 stars.

Skratch Labs hydration drink mix: I expected this to taste like less artificial, less sweet Gatorade. Well, it tasted more like a cross between watered-down jello and fruit-infused water. Not my fave, and by the end of the 16 oz of water I mixed it with, I had a weird aftertaste in my mouth and was unimpressed. I could see it working maybe in an exercise setting (I used it instead during an illness that caused dehydration), but honestly, I’d still prefer Gatorade. 2 stars.

Mazama insulated drink tube sleeve: This is meant to keep water from freezing inside your bladder hose in winter conditions. Unless I travel to wintery areas, this isn’t an item I can use. Looks useful for someone else, though! (not rated)

Mazama 2L universal-fit water bladder: I finally got to try this one out on 8/28. Pros: the fold-over clip closure was really great! Cons: I thought this was going to be easier to clean than traditional bladders, because the entire top opens, but it’s still pretty narrow and there’s a line down the middle so that you can’t dry all sides at once. Also, the mouthpiece leaks like crazy! Not while locked, but it fills up so that when you unlock it to drink, it spills a whole bunch. I have a bunch of Camelbak bladders already, plus the one that came with my generic RockRain bag, and I prefer them all to this one, at least for the drinking bit. 2 stars. 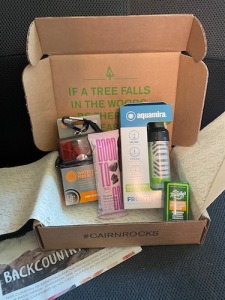 My last package came in early in June (forgot to record the date) and also came with four products.

Aquamira multifunction water filter: So…I will add this to my hiking pack, but this seems like a product more useful for someone doing multi-day hikes or thru-hiking trails where a quick filter for water sources might be needed. I, personally, cannot imagine using it, but it seems a good thing to have in case of emergencies. (not rated)

UTS watertight fire kit: This also seems like a product intended for long-distance hikers or campers (aka not me). So again, into the emergency kit it goes, but I don’t foresee getting any use from it. (not rated) 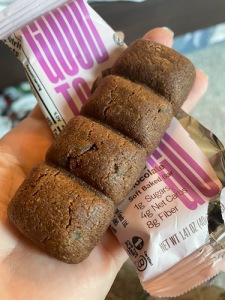 Good to Go bar (double chocolate): When I saw that the packaging on this said “keto certified” and “1g sugars 8g fiber,” I knew it wasn’t for me. But in the interest of science, I opened and tried it. Yes, it did look like a poop log. Texture-wise, it was both mushy and fibrous, and personally that was the worst thing. The bar had almost no taste – a mild chocolate and almost no sweetness, but no bitterness either. I could see the bar working well for someone who was doing keto and wanted a bit of chocolatey taste without too much sugar. But nope. 1.5 stars.

Murphy’s Naturals mosquito repellent balm: I am a mosquito magnet, so I was most interested in this product! It’s deet-free and plant-based, with lemongrass, rosemary, peppermint, and cedarwood. The scent is mild and pleasant. In the container. So here’s the negative bit. It takes a lot of time to roll this balm all over your exposed skin. So yeah, maybe it’s better for someone wearing pants/long sleeves and who only needs to use it on face and neck! But I used it on a 100-degree day while trying to trap cats for TNR for an hour, at sunset, near a yard with standing water, so this stuff went over practically my entire body, and it took 15 mins to apply. The smell also became very overwhelming in that quantity! On the plus side, I only got two mosquito bites that night. (For contrast, two evenings later, I went for a hike where I was moving most of the time, and forgot bug repellant, and got about a dozen bites.) Time-wise, it’s easier for me to just use bug spray, but this little roller will join my hiking kit as well for reapplication on the trails. 3 stars.

Summing up Cairn
After three months, my biggest conclusion is that this subscription box is more well-suited to someone who pursues a wider range of outdoor activities (or who visits a wider range of outdoor environments) than me. I did get a lot of things I could have on hand in case of emergencies while hiking, which was nice, but I also have a number of things that I’m not sure what to do with, and that seems wasteful. The price range, even with the increase, seemed reasonable given the quality and number of products I received. I don’t regret my decision to try the company out, and I do encourage outdoor enthusiasts to give Cairn a try.

Writing. Family. Books. Crochet. Fitness. Fashion. Fun. Not necessarily in that order. Note: agender (she/her).
View all posts by Amanda →
This entry was posted in Personal, Wellness and tagged fitness. Bookmark the permalink.