Since I’m currently on a walking-hiking-running-anything-to-do-with-my-foot break, this post is a bit shorter in number than usual. I might be off for a few months, though, so I didn’t want to just hold it in my drafts. I’ll be back with these at some point in the future… 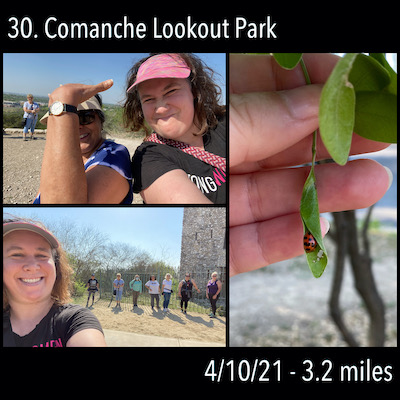 30. After two days of a MAJOR heat wave (temps near 100), it was lovely to wake up to a hike in the 60s and breezy! Wish there hadn’t been so many worms (oak leaf rollers and cankerworms), but it was fun to see the ladybugs out, and we even saw a (non-poisonous) ribbon snake! I’ve been hiking at this park hundreds of times over the years, and this is only the second or third time I’ve seen a snake there. Heh. Top left photo is me making my “cranky” face with Eva, who refused to get into other pictures, ha! We tease each other back and forth on the picture situation every time we’re on a hike together. [Hike 19/52 for my 52 Hike Challenge.] 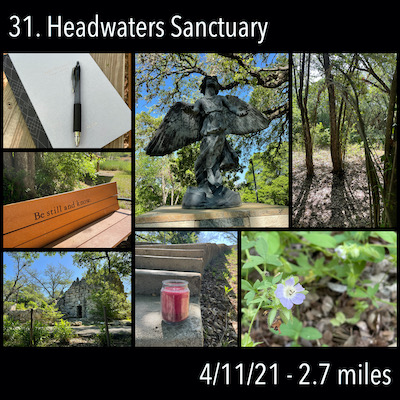 31. I have a lot to say about this hike. First, it was a journaling hike, with multiple stops along the way to write on prompts and some unscripted time as well. Second, it was a new-to-me location in the city, which is funny because this trail is on the Incarnate Word campus (hence the grotto, angel, and prayer bench) where my dad used to work. I’ve been to UIW many times but never knew this trail system existed. Third, a friend of mine that I haven’t seen since pre-pandemic was at the hike today, and it was so nice to see her again! Fourth, there was an offering on the trail today! I’ve been taking photos of offerings at parks and trails all year, so I was happy to see this one (the candle, left on the steps leading up to the grotto). It was a lovely little rambling hike through the woods with a lot of surprises along the way. 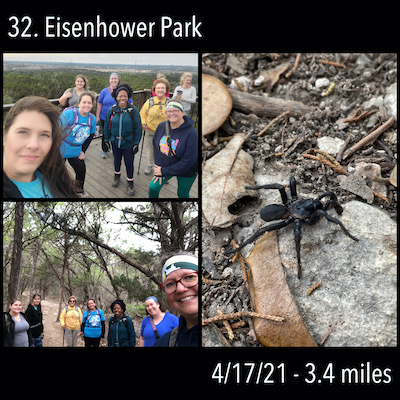 32. For me, this is one of the tougher parks in town, and I haven’t been there since Christmas Eve! I definitely need to train here more often because there are a lot of good surfaces and a lot of hills to climb. This hike was with my leadership group to celebrate Pat’s birthday, and was followed afterwards by lunch at Panera with fellow hiker Lindsay, who is set to have her first baby later this week! [Hike 20/52 for my 52 Hike Challenge.] 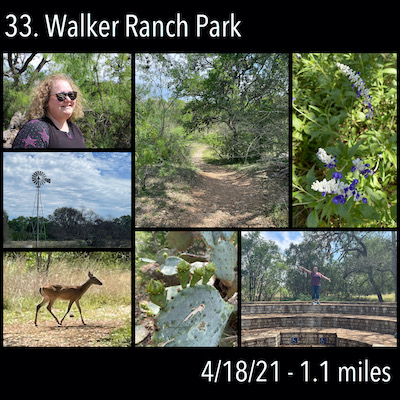 33. It was an absolutely gorgeous morning, so Stephanie and I first went to pick up some coffees and baked goods from Medina River Coffee, a shop we used to hang out in pre-pandemic. Then we went to a nearby park that I’d never been to for a little mini-hike/walk/stroll with lots of stops for photos along the way. A little reminder for me that sometimes, a walk can be short, slow, and easy and still be awesome! 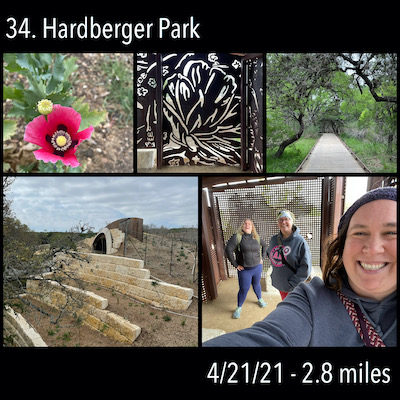 34. On this particular morning, Kristina, Sarah, and I were supposed to gather for our weekly yoga in the park – but it was WAY too cold and windy, so we decided to hike instead. Because of the weather, and the unusual mid-week morning time, there was very few people in the park and we had a lot of it to ourselves. It was the first time any of us had gotten to explore the land-bridge way-stops, designed by local artists. We were amused to find the most wholesome graffiti scratched into them. “Catch fish and release them.” “Ride bikes.” “Stay in School!” I saw a poppy for the first time in my life, heh. And we got to walk up the newly-opened skybridge. Maybe not the best day for it, because it was swaying in the gusts of wind, eek! 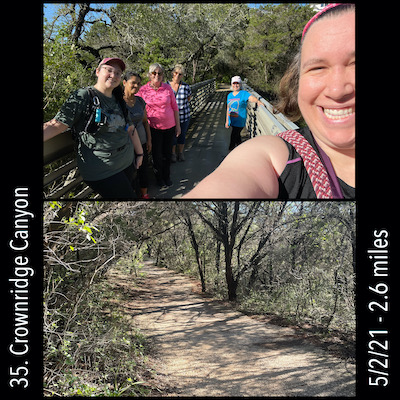 35. Rain, rain, rain. I think the time between these two hikes was the longest between hikes I’ve been since December! Between a weekend of family gatherings and then an entire week of rain, a lot got canceled. Even during this hike, we had to stick to the lower trail, making this a lot shorter then the 3.5 miles originally anticipated. But, better to be safe, and the upper trail was muddy and slippery. No need to get anyone hurt, especially on a hike that included three new members on their first time out with us! [Hike 21/52 for my 52 Hike Challenge.]

Interesting note: In 2020, I hiked with my group 38 times, for a total of 115 miles and eight new-to-me parks. Of course, in 2020, I lost nearly seven months of hiking time due to covid restrictions! But I thought it was interesting to note, because of the 35 hikes I’ve chronicled here, 31 have been with my group, for a total of 105 miles and seven new-to-me parks. All that in just a smidge over four months.