Lots of state parks this time around! I’ve been doing a bit less over this period as I’m trying to protect my foot, still waiting for my MRI and to find out if it’s broken or has soft tissue damage or what. Technically I’m supposed to stop hiking altogether for now…but that’s not happening. Not until I have a true cause. With the way doctors have been baffled by my body over the last twenty years, I’m not going to stop on off-chances. 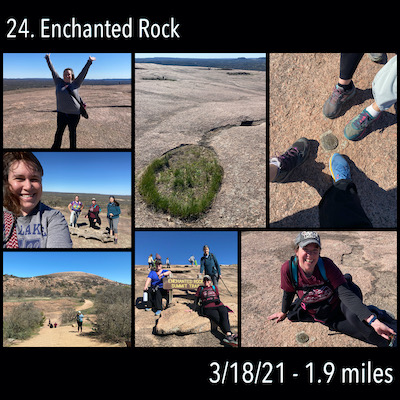 24. Enchanted Rock is incredible – a solid granite dome that goes up at a very steep incline (more than 30 grade in most places). I discussed this particular hike in more detail in its own post, but I wanted to take a moment to record some of the little things from that day:  a stuffed animal puppy wearing a mask; a baby who was clearly not walking yet but standing by the various rocks excited to be at the park; little craggy oasis spots with random trees growing out of the granite or the tiniest succulents I’ve ever seen; two kids who looked like twins wearing giant fuzzy dinosaur hoodies that went down to their feet; a new kind of cryptid at the Fredericksburg library(ha!); going to lunch at a German biergarten (outdoor seating!); a car with a Buddy the Elf sticker on the back that had a waving hand attached to the windshield wipers. [Hike 15/52 for my 52 Hike Challenge.]

25. Now that it’s DST again, we can have evening walks! This is a perfect park for golden hour. And for the first time, there was someone at the Big Tree before we got there. Someone else interested in conserving the tree, which estimates put at over 1000 years old. !!! Unfortunately, someone ripped out a bunch of the protective trees encircling it to make some weird kind of half-shelter, half-Blair-Witch thing (lower left pic).

26. I was really in a bad place and needed this hike to get me out of my head. I was also pleasantly surprised to discover that the hills at this park didn’t wind me as badly as they did just a few weeks ago, which makes me think I might have strengthened my heart/lungs a bit up at Enchanted Rock! And then there was the puppy, who was the most adorable puppy I’ve seen just about everywhere, and I wanted to snatch him and run even though I’m not even a puppy person. He really wanted to go with me but I think that’s just because he could smell my cats, ha! [Hike 16/52 for my 52 Hike Challenge.]

27. This was my last group walk of March, and it couldn’t have been more perfect. Small group, including one person who only joined our group this week (this was her first hike with us), and perfect temps as the sun went down. Great conversation and deepening friendships as well as beginning new ones!

28. So it’s really good that this hike was a doozy, because the before/after the hike was AWFUL! First my GPS took me to Inks Lake RV Park instead of the state park, which was 30 mins out of the way and I had to backtrack and was late. Then the radiology place where I was meant to have my MRIs the next week called six times in half an hour, leaving three voicemails, while I was out hiking. When I was finally able to call them back, they didn’t know why they were calling, had rescheduled my appointments without conferring with me first, and left no notes about the situation. It took multiple phone calls to clear it all up. Then after the hike, we had to stop at three different places before we found somewhere we could eat, and then it wasn’t even good food. The whole thing was an exercise in frustration – but at least the hike was amazing, and the wildflowers were so gorgeous and just everywhere, and it felt so nice to be out on the trail! This is fast becoming my favorite state park and I wish it wasn’t a two-hour drive away! [Hike 17/52 for my 52 Hike Challenge.] 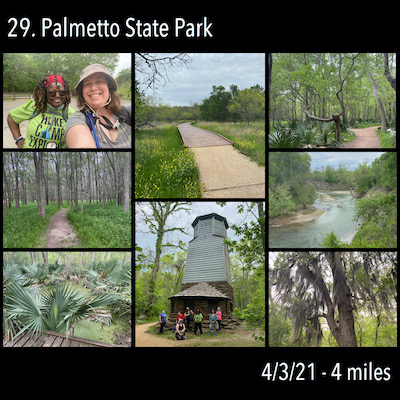 29. This was like being in another world. In Jurassic Park, specifically. Heh. We hiked on four different trails, and each had its own ecosystem. Adding in the overhead threat of rain and far-off thunder getting closer and closer, it was an extremely atmospheric hike! It was my first time at this park and I loved it!! Also: I completely forgot to eat breakfast – I’d packed it, because I had to leave before sunrise to arrive on time – and then spent the first mile of this wondering why I was so hungry already. Only after my stomach started grumbling loud enough to be heard over our conversation and footsteps on the trail did I realize that I hadn’t eaten any food, ha! [Hike 18/52 for my 52 Hike Challenge.]

Things I’ve learned this time around:

Alright folks, see y’all at the next hiking update!