Time for another round of hike-logs!

17. Both times that I’ve been out to this park now, it’s been solid fog! Today, we had rain in addition to fog, and tons of mud. Only one trail was open, and it was a completely different trail than any that I hiked on my last visit in the fall. It’s such a pretty park and one day I’ll actually get to see it in the sun, ha! Even with all the slipping and shoes that were completely ruined afterwards, this was a really fun day. We’re thinking about trying some horseback riding out there some day too!  [Hike 11/52 for my 52 Hike Challenge.]

18. What a great way to end February! Lovely cloudy mild weather, and the owls/birds that were at the tree last time were still there. Some broken and all moved to new locations, but it was fun to see them. Only not fun things about this walk were the four cop SUVs that surrounded someone who appeared to be trying to camp at the park, and the one biker who decided he should pass within inches of us despite us being all the way to the side of the boardwalk. Grr. 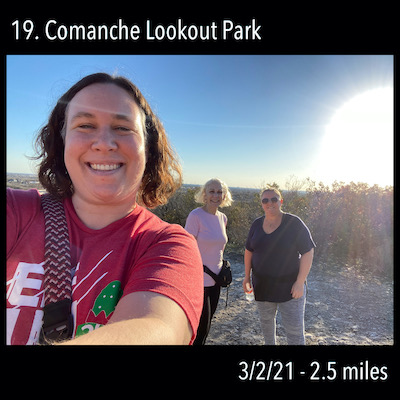 19. This was the day Abbott announced that he was okay killing Texans by taking away the mask mandate and occupancy limits in the state. I was beyond angry and needed some stress relief! Thankfully two others wanted to go on this evening hike, which really helped us all to de-stress! It was a beautiful hike. 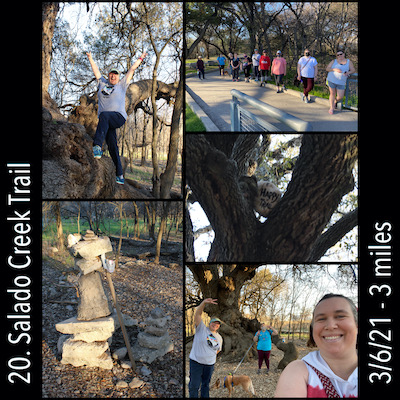 20. This was the first time I’ve been on a hike with more than 10 people (11 total including me) since covid shut down hikes last March. My group puts limits on our numbers, but since we had several leaders here, we decided we could break into two groups and allow up to 14. Since there were 11 – only one more than our max – we decided to just spread out and all walk together. It was kinda nice to be in a larger group again! We had several newbies join us as well, including one woman from Minnesota who was really missing home. I spent a long time talking with her, and once had a miscommunication faux pas that cracked us both up. I asked her about her work: “What do you do?” and she answered, “September 26th,” thinking I said “When are you due?” Ha! I had no idea she was pregnant – at less than three months along, she wasn’t showing at all – but it made us both laugh. It was a pleasant evening walk as the sun started going down, and I’m so happy every time our group grows and we can share our little circle of love with new people! 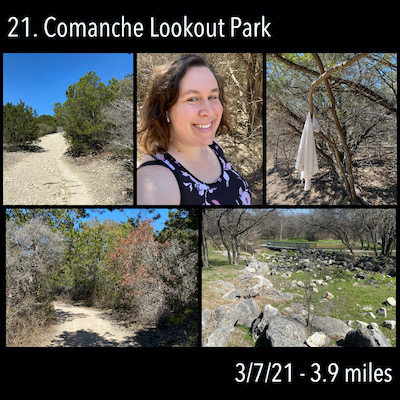 21. This is actually my first solo hike of the year. Of course, what should I do but get out there too late (afternoon!) and not have enough sunscreen on. Sigh. Oh well, heh.  [Hike 12/52 for my 52 Hike Challenge.] 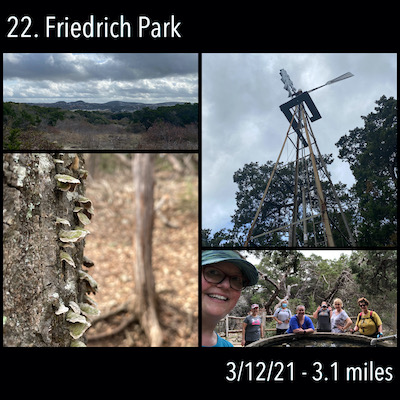 22. My second time ever to this park, and it was just as tough this time around! But very beautiful. Next time, I need to remember to bring water with me, ha!  [Hike 13/52 for my 52 Hike Challenge.] 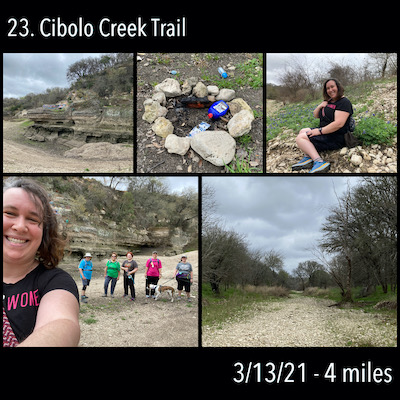 23. This was an incredible hike. First, we had some newbies out with us. Second, there were wildflowers and snails everywhere!! (I love snails so much.) Third, a former group member who moved to Utah last year happened to be in town this weekend and decided to surprise us at the park! Fourth, I found out that this former group member – who I only met once before she moved to Utah, so didn’t know well – is the mother of one of Ambrose’s good friends! How’s that for crazy coincidence? Add to that some lovely photos in the bluebonnets, and it was a perfect day hike! [Hike 14/52 for my 52 Hike Challenge.]

I definitely got in a few new interesting places this time around. And I have a bunch of out-of-the-city hikes lined up over the next few weeks. Hopefully my foot will handle them (and won’t have to be booted – more on that soon!).