My original intention for 2021 was to do a seasonal wrap-up rather than monthly. I set up a future post where I could keep my notes as the months went along. In January, that was fine…but I got toward mid-February, and the notes piled up, and the post content got longer and longer until it was ridiculous and I began to contemplate breaking it into multiple posts. And then I thought – if I’m planning to break this into multiple posts, what is the point of doing it on a seasonal basis? These monthly wrap-ups have been an easy way to look back at my year and remember all the little things that were going on in my life, and to draft it up three months on means that I’ll disproportionately remember more recent months/happenings and leave the early season behind. I just don’t think that’s going to work for me! I don’t want to cut out any of the things I include in my wrap-ups, I don’t want novel-length posts, and the whole point was to include fewer wrap-up posts (so breaking it into multiple doesn’t help!).

So, what to do? Well, I’m going back to monthly posts, and this will just be a (long) combo post for Jan/Feb. These have not been the easiest months. Covid numbers were higher than they have been all pandemic. Ash suffered through another bout of his illness and was down to around 9 lbs (he should be 12 lbs), spending multiple days/nights at the vet before he finally began eating again. Morrigan returned to Kansas at the end of January. We had a week of Snowpocalypse in February, with around 8-10 inches of snow in San Antonio and multiple water/power outages. Our house was under various bits of construction for all of these months. My health has suffered tremendously and I’ve felt like sh1t for a lot of 2021. Everyone is getting major cabin fever after nearly a year of being stuck inside with each other 24/7.

It’s not as if there weren’t good things – I do include highlights below – but so far 2021 has been a sh1tshow, and I’m giving it major side-eye right now. 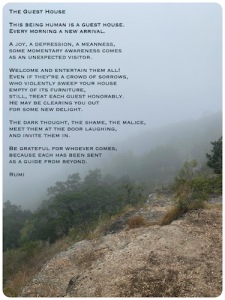 I’ve hardly read a thing during the last two months. Two books in January, neither of which were great, and absolutely nothing in February. There was one Rumi poem that I discovered that I liked (pic at left has the poem transposed on photo I took at Hill Country State Natural Area in 2020), and that was pretty much my favorite read of the year so far. I just haven’t felt the reading vibe since about November. It really doesn’t help that I can’t go browsing at my library. I miss that more than almost anything from pre-pandemic.

Watching
On the other hand, I’ve been obsessed with Murdoch Mysteries, and have watched all 13 seasons available to me since mid-December. I’m not generally a big TV person – for years, the only show that I watched regularly was NCIS – but over the last few years, binge-watching shows like SVU and Murdoch Mysteries has been a saving grace for me. It calms my anxiety for some reason. I’ve spent a lot of the last two months injured, with my left foot swollen and my right hip painful in any position, so a binge-worthy TV show was perfect. Additionally, I saw a few new-to-me movies these last two months (Bill and Ted Face the Music; Mulan), but honestly, I tend to prefer shorter show to watch than movies these days.

(I paused at one point and had this random ad come up perfectly framed!)

Goals
My goals are rather abstract this year, but I’ve made some progress in a few areas: fixing up the house, using more small/local businesses, and learning more about the potential career path I might take (still not ready to discuss publicly). Honestly, I’m not terribly happy about the nebulous goals, and likely I’ll forget them entirely by the end of the year. Already I had to go look them up to even remember what half of them were for this post.

As I said above, my health hasn’t been great in 2021. Until this past October, I’d been maintaining my previous current weight +/- 5 lbs for about four years. Unfortunately, the two months I was on Ozempic injections really f-ed me up, and I gained 15 lbs on that medication. My body is heavier than it has been since 2009, and it isn’t adapting well to the new weight. My left foot/ankle is continually swollen and stiff (see below). My right hip has constant sciatica. My right arm continues to go numb from shoulder-blade to fingertips because of the weight from my breasts. My V02 max has dropped a few points because exercise has gotten harder and harder. In general, my body seems to have weight brackets: Go below a certain weight, and certain symptoms disappear. Go below another weight, and more symptoms disappear. Same with going back up. I’ve crossed the line now where my weight causes random body parts to go numb and my hips to continually hurt, and where exercise is no longer fun but a chore. It’s not pleasant.

Other things in health: I had my covid vaccine (both parts) over these months, and my only side effects seemed to come from the second dose – a terrible headache for three days, and ten days of intense, grueling hunger. I’ve also experienced both sugar withdrawal and coffee withdrawal headaches these past months as I try to remove these from my diet more and more, as if my body is under major protest (I don’t blame it!).

Not everything has been negative, though. I walked/ran the ASPCA 5K in January, and the pain I’d been experiencing in the fall with my running had gone, so that was good! I hope to start up with C25K again this spring, if I can get my foot/hip to cooperate. I’m also intensely grateful for getting the covid vaccines and for having as much immunity as currently possible. Ambrose and I donated blood in January. I updated my Wellness Wednesday vision board/button. I have some upcoming trips this fall to look forward to and motivate me to greater fitness. And I made a little personal discovery with regards to mental health, emotional suppression, willpower, stress, and weight issues – summed up in the following quote from my GGS personal coaching program: If you are exhausting your willpower in order to suppress your emotions, you aren’t going to have much willpower left over for the self-care behaviors that are important to you. !!!

Lastly, the best thing in health over the last two months is that I’ve mostly been sleeping amazingly well! I’ve hardly had to use any sleeping medication at all, and most nights I sleep for a good 8-9 hours. Hurrah! As someone who has suffered (medically-diagnosed) chronic severe insomnia since the fall of 2011, this is INCREDIBLE!

House
I wrote a whole post on the details of this (link above), but in general, we got a lot done over this time period, mostly in this last week of February. Since Friday’s post, we’ve finished the first coat of base paint on the back siding, added the additional dirt/etc needed by the vinca wall and nectarine area, bought/planted the additional plants that will help the nectarine grow well, and put the baseboard back on in my bathroom. There is still a lot to get done outside (siding, porch) that we’d planned to do by now, but I’m happy with our progress (and that the inside stuff is done!).

Favorite Photos of January & February
Top two collages below are from January; bottom two are from February. There are non-collage, larger versions of all these photos in albums on both Facebook and Instagram. As always, these photos are taken by me, and are not always the best photos, just my favorites! 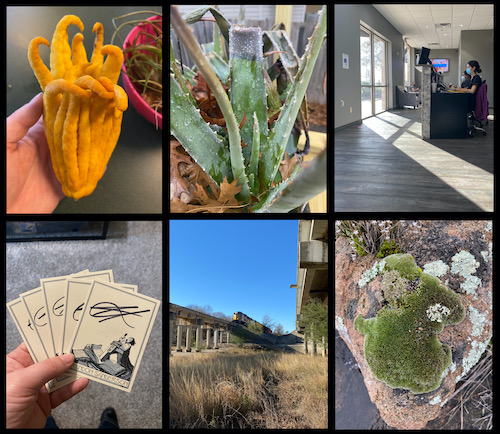 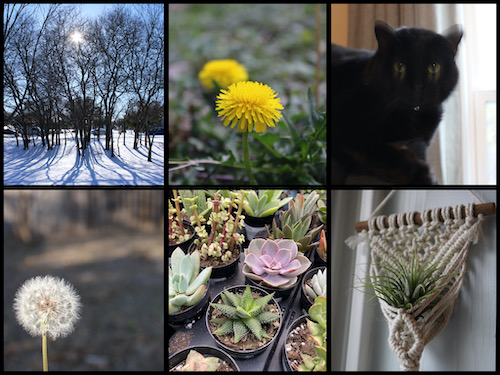 ETA: The problem with posting this with a whole day left in Feb is that I now have another favorite photo to add. Here is a tree tag in a photo that looks straight out of a paranormal horror movie, ha!

Random moments
Since this is two months’ worth of posting, I thought I’d add a section for miscellaneous stuff that hasn’t ended up somewhere else.

Highlights
Despite the not-so-greatness of 2021 so far, there have been good moments. Here are the highlights of the last two months:

Coming up
March is birthday month! My birthday is tomorrow, and there are seven further March birthdays in my family. Several are literally on the same day – which also happens to be the same day as our one-year pandemic anniversary in SA. March 13th – which yes, was a Friday last year. Dun dun dun. Ha! So that’s pretty much all we’re looking at for March. Lots of (virtual) birthdays and the acknowledgement of an entire year stuck at home.