Overall, I’ve hiked a lot less in February than I did in January, due to some foot/hip injuries. This post includes the last few from January and all those up til now in Feb, which will likely be all but one more this upcoming weekend (unless predicted rain becomes bothersome!). It becomes quite obvious through this post that there are certain parks I tend to frequent more often than others! There are also a few that I used to go to often, but haven’t been to in ages…need to diversify my hikes a little more going forward! 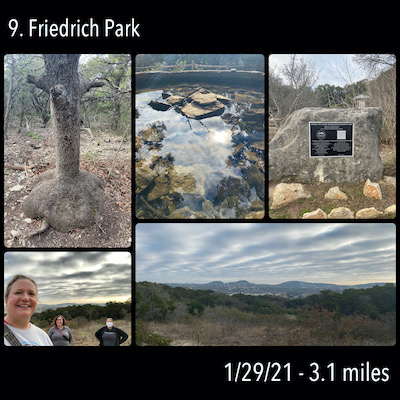 9. It took me a year to work up the courage to go out to this park, for no good reason. (Agoraphobia is stupid; let’s leave it at that.) I’m glad I finally made it, especially on a morning with a gorgeous sky and a great view of the surrounding hills. It always surprises me that landscapes like this exist only a 20-min drive to the other side of town! [Hike 6/52 for my 52 Hike Challenge.] 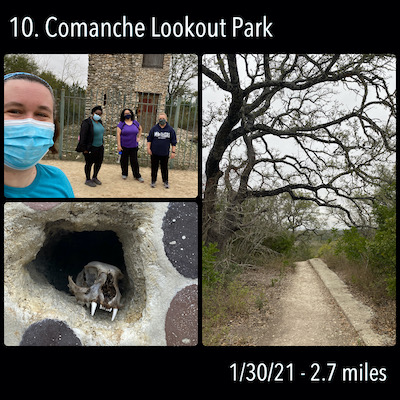 10. Revisiting my favorite park with two folks who had never been there before and one lady who was on her first hike with our group. Someone left that skull on the artwork up at the top. And someone else was flying a drone around up there. 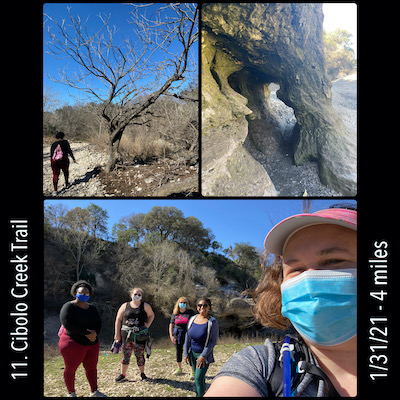 11. I was last at this park two weeks prior, and in the time between, all the water in the pond area had dried up. That let us explore the cave(ish) area, and set up a rotating series of photobomb photos that were the highlight of the hike. [Hike 7/52 for my 52 Hike Challenge.] 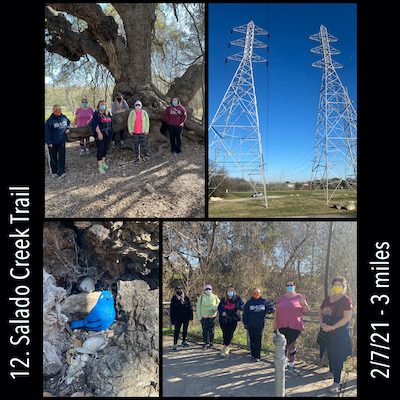 12. This is where we see the Big Tree. It’s not visible from the trail, so you have to know where to look. I often find offerings there, and this day was no different. Someone had painted five ceramic bluebirds and owls to leave in different whorls of the tree. The owls had obviously been painted by children, as if this were a family project. I loved it! 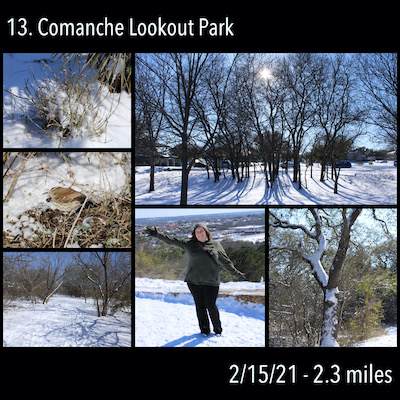 13. Who would’ve believed that not only would we get snow in San Antonio, but we’d get to take a SNOW HIKE?? In all our years in SA, there’s never been the sort of long-lasting accumulation to warrant a snow hike, so Jason and I took advantage of this! When it got warm enough for the roads to semi-melt into slush, we drove (slowly, carefully) to the closest hiking trails to us and tromped around in the snow! I took sooooo many pictures and there were a few slips (but no falls) along the way. The next day I was super sore from all the stabilizing muscles you never have to use off-snow! Ha! [Hike 8/52 for my 52 Hike Challenge.] 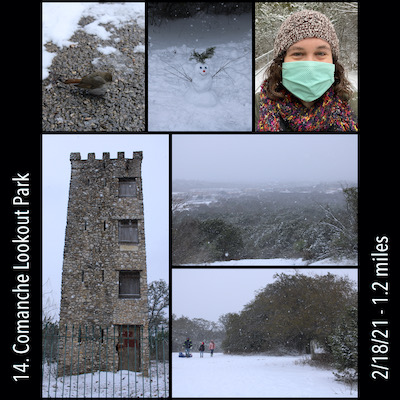 14. Not only one snow hike, but two?? With several snowstorms in a row, there was another big accumulation, and I couldn’t resist going out for another short hike. It was actively snowing during this hike, which was an entirely different experience. Very wet, ha! It was fun to see all the families out playing in the snow! [Hike 9/52 for my 52 Hike Challenge.] 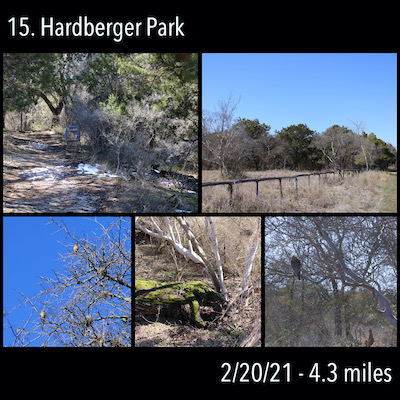 15. This was an impromptu “get me out of the house!” hike with a few friends after being shut inside all week due to the Snowpocalypse. It was muddy, slushy, sunny, and refreshing! We saw a giant hawk, and a bunch of little birdies singing to us, and a very lost little grocery cart (heh). Afterwards, I spent some more time in the park doing some photography exercises that (sadly) didn’t work out, haha! 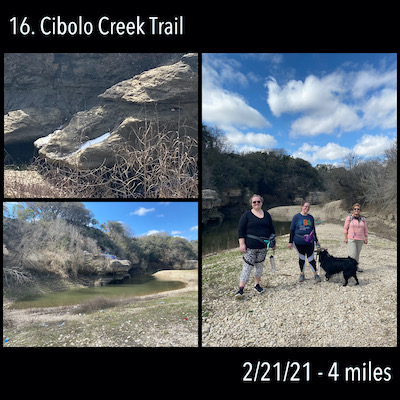 16. Given that there was snow blanketing the ground only two days prior to this, it was like being in another world out there. (Though you can see there’s still snow in a few tiny shadowed areas, top left pic!) There were five of us on this trail, plus one puppy (ironically NOT the one visible in the photo – she just ran up as the photo was taken!). The weather was gorgeous, not too hot or cold, just perfect! [Hike 10/52 for my 52 Hike Challenge.]

Okay. Goal for the next round of hikes: go to more places, see more new things!

Agender empty-nester filling my time with cats, books, fitness, and photography. She/they.
View all posts by Amanda →
This entry was posted in Wellness and tagged fitness, health, Wellness Wednesday. Bookmark the permalink.