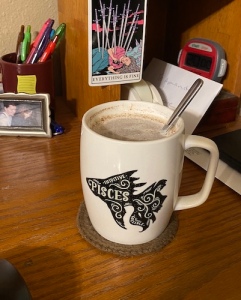 Let’s make this very clear: What happened in the US this week was:

Let’s make another thing clear: our “president” enjoyed the “loyalty” of these terrorists, calling them “very special people” and saying he loved them. 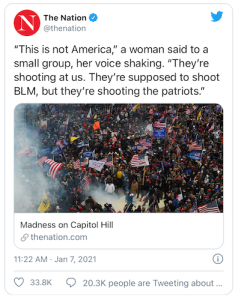 Clarity: No, the troublemakers who broke past barriers, smashed in windows, brought automatic guns, vandalized offices, took selfies in the Senate, and stole property were NOT agitators from the other side trying to make Prump-supporters look bad. Many of the worst agitators have been identified from photos and fall squarely in the Prump, nazi, neo-nazi, QAnon, Proud Boys, and/or white supremacist camps.

Historical note, from my friend Allie, who teaches US History among other things:

The last time the Capitol was breached was in the attack on Washington DC in 1814. This was during the War of 1812 when the British attacked.

Politicians are jumping ship across the board, but what’s more indicative of the truth is how many GOP politicians in the house still objected to confirmation of state electorates. They knew they could do it and get away with it, knew that it would make no difference to the result, but that they’d be able to use it for political points in future elections with their constituents. The people jumping ship are only doing so now that it’s gone so far, now that it’s too late for it to matter, now that in a couple weeks, their leader-in-chief will be no more. The ship is already in shallow waters. It means nothing to “abandon ship” when the water is only ankle-deep.

Back in 2008, when President Obama won his first term, I had my first personal experience that pointed directly to the events this week. Of course, I’d seen how the ugly, racist sentiments had risen to visible levels throughout the 2008 campaign. I knew people were angry and didn’t like their comfortable status quo upset, and I also saw how they blamed anything but racism for their discomfort and aggression. A few days after Obama won, I attended a book club at my local library. I was one of only two attendees other than the librarian hosting, who was a friend of mine. The other attendee was a woman who spent the entire quarter-hour she was there refusing to discuss the book, but instead telling us all about this new Tea Party that was going to “bring that Muslim man down.” She thought we should leave the book club behind and go with her to a Tea Party rally. My librarian friend and I declined, and were left to discuss this with each other afterwards.

Back then, I didn’t see the warning signs. I thought this nonsense would be over quickly, and I was wrong. The Tea Party and extremist GOP views snowballed into conspiracy organizations such as QAnon, fueled other conspiracy organizations like Infowars, and gave rise to the power of incompetent, power-hungry politicians like Ted Cruz and Michele Bachmann. Tea Party extremists have fueled racism, white supremacy, anti-media sentiment, and conspiracy theories, leading to many acts of domestic terrorism as well as (most recently) hundreds of thousands of unnecessary deaths as they spout covid, vaccine, and mask conspiracy theories. This is a dangerous political trend on the far extreme right side of the spectrum, and like any group of extremists, should be taken seriously and SHUT DOWN.

By the time this week’s events unfolded, I was not surprised, not even in the slightest. I’ve been expecting something like this for months now. I’m angry, and I feel helpless, because in all honesty, it doesn’t matter if these events fall into all ten of the categories I named above: NOTHING IS GOING TO HAPPEN. No action** will be taken, no people will be arrested, no politicians will be held accountable. The Idiot-in-Chief will continue to claim he was falsely ousted from office, and his followers – both the blind and the deliberate – will continue to push our country into further violence and separation. And likely it will happen again in the weeks to come.

I have friends and family who support this man, but I’m sorry, I won’t stay quiet. There’s a difference between being a conservative/Republican and being a Prump-supporter. I’m all for political discourse and contrary views. Hell, I wish there were more than two large political parties in our country! But there’s a HUGE difference between “contrary views” and “insurrection.” If you’re on the Prump side, you’re not only on the wrong side of history, you’re on the wrong side of the law. STFU, go home, and take a good look in the mirror. You’ve either been duped or you’re a nasty human being. There is no other option. My advice? Step away from the insurrectionists, apologize, improve yourself, and stop being/supporting a traitor to this country.

**Yes, I know there are articles of impeachment etc being drafted, but I honestly still believe nothing will come of this.