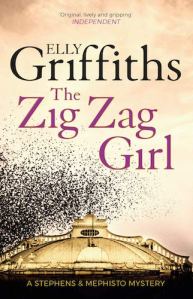 From GoodReads: Brighton, 1950. When the body of a girl is found, cut into three, Detective Inspector Edgar Stephens is reminded of a magic trick, the Zig Zag Girl. The inventor of the trick, Max Mephisto, is an old friend of Edgar’s. They served together in the war as part of a shadowy unit called the Magic Men. Max is still on the circuit, touring seaside towns in the company of ventriloquists, sword-swallowers and dancing girls. Changing times mean that variety is not what it once was, yet Max is reluctant to leave this world to help Edgar investigate. But when the dead girl turns out to be known to him, Max changes his mind. Another death, another magic trick: Edgar and Max become convinced that the answer to the murders lies in their army days. When Edgar receives a letter warning of another ‘trick’, the Wolf Trap, he knows that they are all in danger…

Likely this review will be shorter than that description. 1) I only realized recently that Elly Griffiths had another mystery series out, with five books published. 2) The first three of those books are available to me for free from the Audible Plus catalog, yay! 3) While I didn’t find this book as engaging as Griffith’s Ruth Galloway series, it was a fun read, and I’ll likely read the rest of the series. 4) The theatre/magic bits made the story quite interesting and were what I enjoyed most. 5) I kept getting tripped up by the characters’ “back in the war” comments because it felt like the war was 20+ years behind them rather than the rather close 5-ish years. 6) The culprit was fairly easily spotted early on, though I admit that I had another candidate I thought more likely. 7) James Langton narrates, and I quite liked his performance.