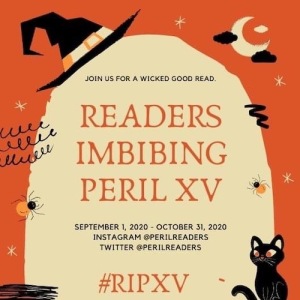 Well, I didn’t get to read as many books this year as I wanted to for RIP XV. A lot of books were delayed in library holds, and I’ve just been reading so slow and casual this year. Though I did read quite a number – more than a third of this year’s total has been from the last two months, and all but two of those were for RIP! Here’s what I read, in order of reading:

Of these, there was one reread, four new-to-me authors, three continuations of pre-RIP series, two books set in blizzards, and three books involving cold-case investigations. Other than the reread – a long time favorite – I honestly would have difficulty in choosing a favorite book. There were quite a lot of good ones, and several that were good with disappointing bits to them, but none that stood out as superb. So instead of picking a favorite, I’d have to say the one that was the best-written was The Searcher, and the one with the most striking RIP-esque feel was Voices in the Snow.

Likely I’ll continue with my RIP reading in the months to come, despite the event being officially over. There are just too many books that I’ve been holding out to read and couldn’t get to, and I don’t want to wait all the way until next year to read them!

As always, thank you to the wonderful bloggers who continue to run this event over the years, no matter how formal or informal!