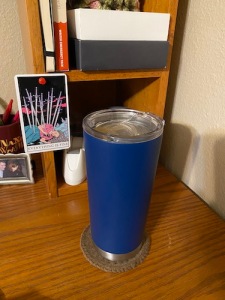 What a week! I already spoke about some of the stuff happening this week (construction, etc), but MAN it ended up being a Week on top of that.

First, let me say that I am NOT cut out for school. A year ago, I decided on a new career path (now that my kids were almost off on their own), and thought that having an end-goal would make school feel meaningful again, instead of pointless. That didn’t turn out to be the case. The decades of nightmares and the screaming in my head should have been a clue. I tried to override that and just deal with it – after all, the classes were incredibly easy and it would only be 18 months before I could graduate and move on to the next thing – but each day got worse. I already discussed the lethargy, depression, and severe downswing in my mental health. On top of that, I began to have a new kind of nightmare every night. Nightmares like watching one of my kids go through a trial for a brutal crime, and realizing that though I couldn’t imagine him doing it, he actually had. Nightmares like being married to a drug dealer who was extremely physically abusive, with no escape, trying each day to simultaneously be perfect, anticipate/defuse his moods, and not look afraid when I spoke to him. Every night was a new nightmare-scape to navigate and survive.

By mid-week, I was in a place where even thinking about school had me in tears. This is not normal depression for me – I tend to go numb rather than weepy – and I knew I had to do something. I spent the week talking with various people about the situation, and at lunch on Wednesday, Jason and I talked things through for like the seventh time. The thing is, yeah I decided to work toward being a librarian last year, but I only chose the career because it was one that felt good rather than like a noose being put around my neck. I’ve never in my life had any idea what I wanted to do as a career, other than dream of being a published author, and wanting to raise a family. That last part has a long history steeped in PTSD, but setting that aside, it boils down to this: I don’t want a career that’s going to define me as a person – I’ve already done that! I want the next phase of my life to be something I enjoy, and on my own terms.

So I’ve let go of the librarian dream.* This is not a path I can walk, not with my nightmares and waking inner voice screaming at me to abandon ship. I put in withdrawal papers. This is the fourth time I’ve tried to go back to school since my kids were born, and the fourth time that I’ve withdrawn. (Not to mention the dozen other times I considered and put off applying.) Unless something really major changes, I plan for it to be the last. School and I were not meant to walk together. And it’s time for me to come up with a new, non-school-based career plan. 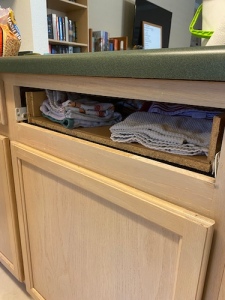 A lot of the week was thus filled with school-angst, paperwork, nightmares, depression, and of course construction (carpets on Thursday, scheduling the a/c work, another kitchen cabinet drawer-face falling off, more back and forth with the person working on our deck supports delayed due to rain). But there was another surprise.

Laurence’s wisdom teeth began to erupt without pain back when we traveled to WI at the end of June. But it’s been six weeks since then, and this week he started to get major pain and gum blisters. We took him in to the dentist on Wednesday, and all four of his wisdom teeth are impacted. Sigh. So Laurence needs oral surgery, same as Morrigan did last summer. The problem? Apparently when our employer changed our dental insurance this year, the new insurance doesn’t cover** wisdom teeth removal – even if the teeth are causing problems. We literally had to pay $3200 for the surgery in advance to get the surgery scheduled. Really, WTF is up with dental insurance that doesn’t cover necessary oral surgery?? Health coverage in the US is so f***ed up!

However. Out of the nightmares, good things can emerge, right? They say that children go through periods of nightmares right before they make developmental leaps. While that only applies to literal nightmares, it makes an apt metaphor – eventually the nightmares end, and something new can emerge. This is where I’m ending the week, with (hopefully) good things to come.

*****
*I will be a library volunteer instead, and continue to haunt my local library, my second home, for all the years to come!

**This information came out to us mid-week, but we did some research of our own, and it turned out that the dentist was lying to us!! This kind of surgery IS covered. It’s still going to be expensive, but not nearly to the tune of $3200. We’ve been unable to get ahold of the dentist’s office since making this discovery since they’re only open a few days per week, but we will most definitely be getting a refund!!

Agender empty-nester filling my time with cats, books, fitness, and photography. She/they.
View all posts by Amanda →
This entry was posted in Personal and tagged education, health, Sunday Coffee. Bookmark the permalink.