I’ve spent the last six years searching for answers. WHY did I suddenly start gaining weight in May 2014? WHY has my weight been steady for over three years now, but will not budge downwards no matter what I do? WHY is it that I can eat well and exercise tons and stay morbidly obese? I’ve experimented and researched and theorized. I’ve gone to therapy for mental health issues, improved so many areas of my life, and eliminated one after another potential causes. Over the last few months, I’ve talked a lot about the last hope I had – the correlation between when I started gaining weight, and when my coffee habits changed. Then last week, I had an ah-ha moment that pointed me straight to the answer, the root of this problem. I know what caused the sudden, inexplicable, rapid weight gain of 2014/2015. And I know why it very suddenly stopped, and what has kept me from losing weight since. Maybe I’m wrong, it’s always possible, but I’m 99% sure as it explains everything that has come since then – every symptom, every blood test, every diagnosis.

Factors that led up to this particular ah-ha moment:

As I responded to my coaches, I had been awake for less than an hour. I was drinking my morning coffee and going through my morning routine. I was also very hungry because I’d slept in a bit later than normal and it was almost time for breakfast, but I was determined not to eat until my morning routine was finished. That’s the moment the ah-ha moment hit. I can’t just come out and say what I realized, because it’s complicated and involves a six-year-long situation. So I’m going to lay this out step by step, and anyone who doesn’t care can skip through to the bottom and then come back to read all this if my conclusions don’t make sense without context. 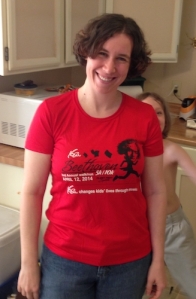 To start: On May 1, 2014, I made significant changes to my diet. I tried to follow the Whole30 plan in an attempt to find any food sensitivities. (This is utter BS, btw, but I didn’t known that then.) One of the changes was a switch to black coffee. I’d only begun drinking coffee in late December 2013, and I drank it with half-and-half and a large scoop of homemade chocolate sauce. The switch to no-cream-no-sugar was a big one. I only lasted about eight days on Whole30 before I gave it up. The next day, I tried to drink my coffee the old way, but found I no longer liked the combination of sugar and coffee. I then began to drink it with just half-and-half. By August that year, I switched to full-on black coffee, and kept it that way until the summer of 2017, when I inexplicably began to crave coffee with cream in it again. I’ve had it with cream (full cream, or half-and-half) ever since then. 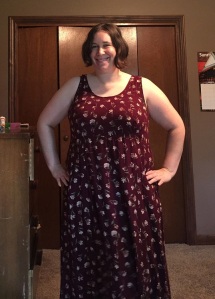 Now, to correlate my weight gain timeline: In May 2014, I’d maintained a healthy weight for almost 18 months. Starting in May, I gained weight steadily through the summer despite no change in calorie-consumption or exercise. In Sept/Oct 2014, I went through the full Whole30 program. During that time, I lost most of the weight that I’d gained over the summer. After the program, I spent several months struggling with weight, going up and down in little bursts. Then late Feb/early March 2015, I began gaining rapidly. I started on a specific antidepressant then, and there’s a possibility that the medication was a factor. However, I got off it in October 2015, and continued to gain – slower but still steady – until early March 2016. At that point, my doctor put me on Metformin for insulin resistance after my PCOS diagnosis. Since then, I’ve maintained my weight. I got off Metformin in the fall of 2017 with no change to my weight. The only other thing to note is that several times since 2017, I cut my coffee down to a single cup per day, and during those times, I was able to consistently lose a small amount of weight.

So – you can see why I suspected coffee as the culprit of weight issues (combined, of course, with the sensitivity to a specific medication). However, the combination of the factors mentioned above led me to make a specific realization: Maybe it’s not the coffee itself that caused the gain. Maybe it was the way in which I used the coffee. 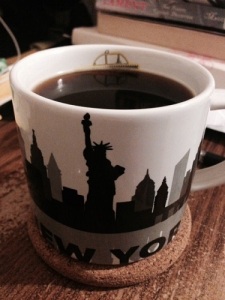 Coffee is an appetite suppressant. It dampens hunger signals. I didn’t notice this when I was drinking the chocolate-coffee, because each cup had about 100-200 calories in it. But I certainly noticed when I began drinking it black, and of course I used that to my advantage! Everyone’s heard the dieting advice that you should drink a glass of water if you get hungry to hold off eating for a while and see if you’re REALLY hungry. Well, it’s not much of a stretch to start doing the same with coffee. Hungry when you wake up? Have a cup of coffee and you can delay breakfast for an hour or two. Hungry before lunch or normal snack time? Use coffee to stave off appetite so you won’t overeat by eating too early! Sounds perfect, yeah? Only…

Responding to hunger and satiety cues was THE MAIN DIETARY PRINCIPLE that I used to lose weight in 2011-2013. That was literally the most important thing, and coffee consumption – when devoid of calories – cut me off from those signals. Not long after we moved to Boston in 2014, I began to get frequent hypoglycemic attacks, usually within half an hour of drinking coffee in the late morning (in an attempt to avoid eating lunch too early). To this day, I get hypoglycemia attacks frequently if I drink too much coffee in a day, or too much in a single setting, particularly if this consumption is coming around a normal mealtime. Out with a friend (pre-covid of course) at a cafe in mid-afternoon? I don’t need a snack, the coffee will hold me over! Until I begin shaking and I realize that if I don’t eat something immediately, I’m going to be very, very sick…

Y’all. I literally gave myself a metabolic disorder by using coffee as an appetite suppressant. 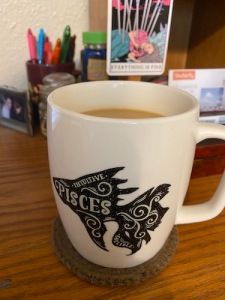 Ironically, I didn’t even eat fewer calories through this time. My calorie consumption remained steady; I just manipulated those calories to fit into certain times of day. I was afraid of the weight gain, and the more fear, the more tightly I controlled when I could eat, and the more messed up my body got. Blood sugar fluctuations lead to insulin resistance lead to weight gain, fatigue, worsening insomnia, and a whole host of other things. The only times I’ve lost weight in the last six years? 1) During the Whole30 program I completed, which is super low carb and early on in my metabolic disruption, and 2) when I’ve cut back on coffee to one cup per day, thus enabling my ability to better attune to hunger cues. My regain stopped when I began taking a medication to control my insulin resistance, and it didn’t begin again when I stopped taking that medication because there were now some calories (albeit minimal) in my coffee with the re-addition of cream a few months prior.

This is not an easy fix. I can – and have begun to – change my behavior. No coffee before meals, for instance. But the damage came not from the coffee itself, but the metabolic disruption caused by how I used the coffee. The weight gain was collateral damage. And the only way to heal is to first heal my metabolic system. Anyone who has any kind of metabolic syndrome knows just how hard this is.

However, it CAN be done. I did it once before, and now that I know, I can focus on doing it again. It will probably mean another couple years of slow, plodding work that may or may not result in weight loss. Hopefully, though, it will result in better bodily health overall.

4 Responses to Wellness Wednesday – The Answer