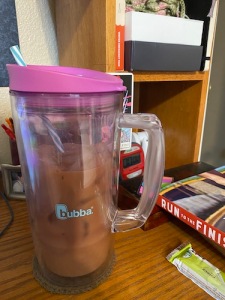 Thursday morning, my alarm went off at 6 am. Even though I’d had bad insomnia the day before, I’d set the alarm early because I wanted to get in some quick yoga as a dynamic warmup, and head out to the trails for five miles or so of hiking/walking/running. As things go, the morning started fine – in fact, more than fine. I felt good on waking, full of energy from my rest day the day before, excited to try out the new Camelbak I bought in June and the new cooling towel I’d received the day before. Quickly, I went through my morning routine, got into my workout clothes, and did my yoga. Then I packed up the Camelbak, filled it with ice water, wetted the cooling towel, and made to leave the house. Only…I tried to drink from the Camelbak, and it wouldn’t let any water through. 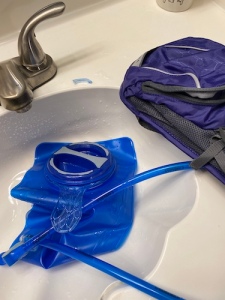 Some fiddling followed. I thought maybe I had the lock/unlock setting wrong, or missed a removable plastic tab somewhere that was blocking the tube, or something. Or that maybe I needed to compress the bladder to get the water flowing at first, even though that hasn’t been my experience with any other Camelbak. I could see a few spots of water in the tube, but the most I could get into my mouth was a drop. For time’s sake, I checked if my old Camelbak’s mouthpiece would work on the new tube, but they were different sizes. Frustrated, I poured as much of the ice water into my old Camelbak as would fit (it’s much smaller), and then began to ease the bladder out to dump it the rest of the way. Part of the plastic casing snapped off.

So at that point, I got a big ragey. Not only was my new Camelbak defective, it had also broken the first time I tried to use it. Plus, since I bought it over a month ago, I had no idea if I could get a refund for it, despite this being the first time I’d even taken off the tags. (Who could predict that all the rest of June hikes would be canceled after my order, then that I’d be in Wisconsin for most of July?) Beyond all that, it was now almost 9am, after waking early for the second day in a row, and I still didn’t have what I needed to go out on my five-mile workout.

With that in mind, I gave up on the defective equipment, pared down my supplies to what I could fit in the one tiny pocket of my old Camelbak, and set out. The heat plowed over me on walking outside, but with determination fueled by anger, I began to drive down to the trails. Partway there, the sun came out from dissipating clouds, the last of my protection gone. The temp was over 80 degrees plus heat index. Defeated, I circled back and drove home, where I proceeded to have a bizarre and inexplicable** hypoglycemia attack despite having eaten not long before. The day just went downhill from there.

Rage. I don’t get angry often. Irritated, yes; frustrated, yes. But ragey growling full-throttled anger? No. And when I do, when the sensation is all-consuming, I have the worst of coping mechanisms: I attack myself with food. Being well-aware of this tendency, I was able to strike a certain balance that day – I ate total crap food, but kept myself from binging on it. It’s the closest I’ve been to a binge since early June 2019. But even though I stopped just shy of binging, it wasn’t a good day. Every little thing that could go wrong did so. Stupid stuff. Like, when I was trying to hang up my old Camelbak to dry, it took six attempts before it stopped falling to the floor after hanging. Just enough stupid crap to keep me ragey. Some good came of the day – REI for instance gave us a full refund for the defective Camelbak no questions asked – but for the most part, things kept spiraling down.

After the refund from REI, I began looking online for something to replace my Camelbak. You know what drives me crazy? Companies that think all runners (and all people who exercise generally) are thin and small-chested. Which is just about all fitness-wear companies. I decided to get a hydration vest instead of a pack (the difference is having the pockets in the front rather than just on your back), and despite HOURS of research, could only find ONE vest that might fit on my chest. (Hopefully, at least. I can’t even be sure it will. This might have to be returned, too.) Just like sports bras and running shorts and all the rest, companies assume that bigger bodies = “you don’t exercise enough to need specialized equipment.” Well, f— you then. Bigger bodies run, too! UGH.

Anyway. I have a new hydration vest on the way, and we’ll see if it works out. Wish me luck.

**Re: hypoglycemia – I’m pretty sure that this was a combination of my body’s hormone reaction to rage and the kind of coffee I’d had that morning. Awhile back, I mentioned that a prolonged period of drinking iced coffee hadn’t changed my body in any way. However, during that experiment, I was drinking half traditional iced coffee – chilled brewed coffee, so the acidity is the same as hot coffee – rather than all cold brew. For the month that I was in WI, I drank 95% cold brew, and I have seen a tiny shift in my body. Might be unrelated, but it warrants further investigation. This week, HEB was out of cold brew, so we picked up regular iced coffee. I drank traditional iced coffee on both Wednesday and this ragey Thursday. My digestive system felt really OFF on Wednesday, and then I had this hypoglycemia attack on Thursday that came in a time when my blood sugar should have been stable. I’ve experienced hypoglycemia following (hot and cold) coffee consumption in the past; it’s one of the warning signs that made me think coffee is related to my bodily woes. So I’m returning to the cold-brew experiment while continuing to cut back on overall consumption.