Last week, on my third day of severe insomnia and a bit delirious from having been awake since 4:15am, I had four major ah-ha! moments throughout the day. Probably due to the delirium, I could only remember three of these moments the next day (sigh). I’m not sure what made this particular day so productive in terms of mental clicking, but hey! I’ll take it!

As a competitive swimmer through adolescence, cross-training was a big deal. We did all kinds of exercises ranging from simple cardio workouts to basic weight-lifting. There was a weight room by the pool where we used stations consisting of hydraulic machines, weighted cable machines, and bodyweight equipment (like pull-up bars). We did not do free weights – there was probably an insurance reason for this – and perhaps because of this reason, I have never been enamored of barbells and such. I follow a great many women who lift weights, and I see them getting super excited by squatting heavier barbells and deadlifting more weight etc. And I have no desire whatsoever to do these things, the same way I can be happy running 5Ks without ever being tempted to train for a marathon. So for years, I’ve kinda just thought of ST as supplemental to my workouts. A thing I have to do, the same way I have to eat those veggies I don’t particularly like in order to get in the right nutrition.

The ah-ha moment: Actually, I DO have particular strength-related desires and goals. No, I don’t care about deadlifts or squats or that bizarre Turkish get-up thing. You know what I care about? Pull-ups. I remember being an 11-year-old kid in sixth grade, looking up at the record board in the gym. Pull-up records were recorded as such: Boys – 18 (6th grade), 21 (7th), 18 (8th). Girls – 1 (6th), 0 (7th), 1 (8th). F— that! I decided right then and there that I would not only break the girls’ records, but I’d get up to that 21 pull-ups that was the highest record. And I did. In 8th grade, I did 21 pull-ups nonstop. (Notably, the coach didn’t care or count it, despite watching me do it. That record board, last I saw, remains 1-0-1 for the girls, grr.) In 10th grade, I again did 21 pull-ups nonstop, after two sets of 10 pull-ups during a cross-training session. Y’all: I LOVE pull-ups. When I began losing weight a decade ago, my goal was to be able to do at least five of them again, and I was up to four before my major abdominal surgery in Jan 2014. This goal – plus others like being able to do skater/pistol squats, and crow pose, and headstands – is my focus in strength. Maybe I don’t like free-weights, but I DO love being strong and achieving big things in ST!

After five years of yoga practice, I know what my body can/can’t do. My shoulders, for example, are not very flexible. There’s this practice that involves a forward fold with your hands clasped behind your back. They’re supposed to raise toward the ceiling when you lean forward. I can barely raise mine an inch above my back, and it’s awkward and painful. It’s just one of those things my body can’t handle, or so I’ve thought for years. Then on this particular insomnia-fueled day, I was talking to my friend Stephanie, and as part of our conversation, I happened to look up photos of this pose. In one of them, there was a modification included. Y’all – I thought I knew all the various modifications in yoga by now, but clearly not. Immediately, I tried it out. Lo and behold, my arms went way up toward the ceiling the way they’re supposed to! I’ve been skipping this exercise for years, and now I don’t have to anymore! 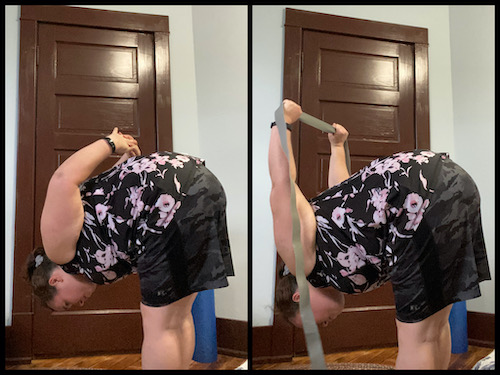 I’ve been talking about trying to quit drinking coffee for months now, and I’ve been thinking about it for years. For a long time, I’ve suspected that the coffee is deep at the root of why I suddenly started gaining weight rapidly in 2014, and why I haven’t been able to lose weight in all the years since. Particularly as the times when I’ve cut back to a single cup per day, I have been able to lose. And yet, for all my talk, I haven’t quit. I’ve barely cut back. I keep putting it off, trying other things, blaming circumstances and addiction and who knows what else. I thought admitting this was an addition problem was honest and brave. It wasn’t. Because the true reason finally came through to me on the evening of this insomnia-driven day. 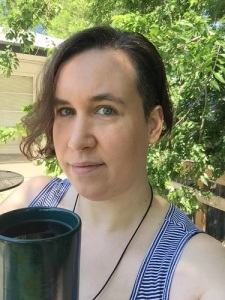 I have not – cannot – give up coffee because I’m terrified of what will happen when I do. This is my last and best hope for my body. If I give up coffee and that proves to be unrelated to my inability to lose weight, I have nothing left. No hope, no answers, nothing to try. This is my last grasp at some control. I’ve experienced total lack of control when it comes to my weight. During my 11-year illness from 1998 to 2009, my body paid no heed to the things I ate or the exercise I sweated through. That is a completely demoralizing and terrifying mental place to be in. After ten years of it, I gave up, and spent the last year of my illness not trying at all. It wasn’t good for my mind or my body, and I cannot bear to get back to that place of hopelessness again. So I cling to my coffee, because while I do, I still have hope that there may be an answer out there, and I’m not just out of luck.

This is a major mental breakthrough, y’all. Just knowing the root of my mental blocks is a huge step toward overcoming them. I still have to work through that fear, but now at least I know what I’m working with.