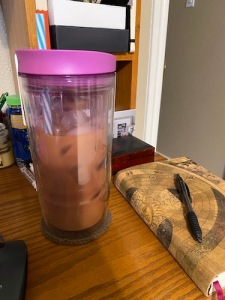 I could end the post that way, but I won’t. Ha!

So…um…I made a mistake. Earlier this year, I talked about the experiments I was doing with coffee to see what, if anything, might be affecting my inflammation issues and inability to lose weight. Since I began drinking coffee more regularly around the time I began mysteriously gaining, it makes a lot of sense to test this. But it could have been a lot of things: the caffeine, the coffee itself, the acidity in heated coffee, etc. I decided to start by testing the last of these, and switched over to iced coffee in the morning. This was my mistake.

Prior to the switch, I drank a single cup of coffee in the morning, and then either a second cup or a tumbler of iced coffee around 2pm in the afternoon. But since switching, I drink TWO tumblers of iced coffee in the morning, and another in the afternoon, sometimes two… It’s NOT okay. And for the first time, coffee has become a serious addiction. I didn’t used to have a problem cutting back to a single cup in the morning and none the rest of the day. I liked the ritual of the coffee more than the taste or caffeine. But my body seems to have transitioned into a real caffeine addiction now that I’ve gone iced. I don’t know if the levels are higher or if it’s just the quantities I’m drinking or both. What I DO know is that sometimes if I don’t drink a cup in the afternoon, I end up with migraines in the middle of the night. Sigh.

So now I begin the work of cutting back. The subtraction of heat/acidity has made no difference to my weight/inflammation, and now I need to try eliminating coffee and caffeine altogether. Unfortunately, I first have to work to break the addiction. Aaaaand I keep putting that off, because addiction. Heh.

Wish me luck. The goal is to transition over the next couple of months. Slowly. But steadily. Hold me to it.

Agender empty-nester filling my time with cats, books, fitness, and photography. She/they.
View all posts by Amanda →
This entry was posted in Wellness and tagged food, Sunday Coffee. Bookmark the permalink.