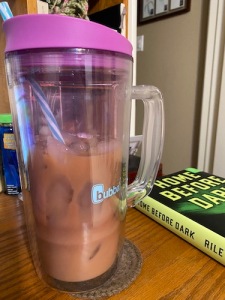 Well, it happened. I officially got tired enough of my current hair situation that I went the DIY route. Hey, I know, this is the whole meme-joke of quarantine, eh? I’ve reached the “cut my own hair” stage. But really, this isn’t actually a huge deal for me. I have massively curly hair and I’ve cut my own hair many times in the past. Usually people can’t even tell unless I really screw it up. (Ha!) I don’t do anything special with my hair or style it in any particular way when I cut it, either. Especially right now, when the goal is to grow it out long. The one thing I wanted right now but didn’t do because I’m not crazy is give myself bangs again. I stuck with trimming off the bottom couple of inches because they’ve gotten extremely damaged over the last two years. And then adding layers so that my head is not one giant ball of floof. 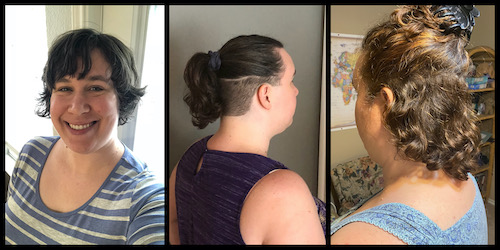 This first picture is when I had my hair (professionally) cut short in the summer of 2018. It was the first time in ages that I had bangs as well. Over the next year, I continued to grow it out long again, and in July 2019 (middle photo), I had the longer parts shaped to grow out and the undersides shaved really short. (It’s HOT in Texas!) The last photo is from late May this year. I wanted to see how long the shaved portion had grown out in the last ten months. Answer: a LOT. I was also happy to discover that this new growth is coming back with my lifelong spirals/curls rather than the waves that my hair has had since moving to Boston in 2014.** 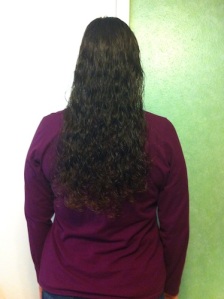 My goal since 2018 has been to grow my hair really long again. The longest it’s ever been was back in 1998/1999 when it went almost to my waist. Back then, though, I was dying it and not taking care of it very well. Since then, I’ve managed to grow it out pretty long once, long enough to donate to Locks of Love in 2013. I’d planned for longer (and a longer donation), but my hair was getting difficult to handle. I thought this was due to length, but on examination of photos afterwards (right), I realized that I just needed to trim off the damaged ends (which appear to be a different color, because my hair lightens considerably when damaged). Note that this pre-donation photo in March 2013 is almost three years after any kind of cut and had grown out from a cut even shorter than the one pictured above from 2018.

Recently, the same trouble I was having in 2013 with my hair has come back. Now, I know better than to think this is just due to length! The ends were damaged. I needed a trim. But there was no way in hell I was going to a salon with San Antonio in its current covid state. After dealing with the worsening damage for the last few months, I decided to take the plunge and give myself a DIY trim (though again, I didn’t attempt bangs, even though I’d like those back!). I probably took off more than I needed to – four to six inches, instead of two to three – but the cut went fairly well. In the photo (left), not much of the curl shows yet because it takes a few days for my hair to realize that it’s not as heavy. In any case, I’m really happy with the way it came out, and I don’t feel like I need a professional to do anything to it at this time. Plus, it’s still long enough that I can wear it in a ponytail, AND it’s not so long that said ponytail lays on my neck and makes my skin too hot. It’s a San Antonio summer win-win!

In other news, Gavroche finally had his dental surgery this week. His whole life, he’s had problems with gingivitis, no matter how often he gets dental treats and such. He’s a cat, and cats don’t exactly let you brush their teeth! Several of his little teeth have fallen out on their own, and back in January, he was scheduled to get several molars removed. With Ash getting sick, though, we had to postpone the surgery. Then there was covid. Finally, when Gavroche’s lip swelled up again last week, we couldn’t put it off any further. He didn’t seem to be in pain and he was having no problem eating, but we didn’t want the situation to worsen. He went in Friday and came home that afternoon. The poor guy doesn’t like the stitches in his mouth, nor does he like being quarantined to the recovery room with Ash, but he began eating again right away and has been fine other than some mouth soreness and the irritation of stitches!

**Unrelated side note: I began drinking alcohol around the time I moved to Boston, and the alcohol changed the composition of my hair, causing it to grow wavy instead of spiraled. I very rarely drink alcohol anymore, especially in the last year, so my hair is returning to its former structure. This is a real thing that happens – I had no idea until I did some extensive research! I thought it was just age-related before. So just a little PSA: alcohol can do some really weird things to your body even if you’re not drinking it to excess!