As my long-time followers will already know, May is always a tough month for me between the weather getting insanely hot and my personal PTSD issues. It was particularly tough this month as quarantine stretched into its third month, with all five of us cooped up day in and day out in this house. The kids have been at home daily for longer than the average summer break, and summer break has just begun. Everyone is stepping on each other’s nerves and struggling a bit with the new reality. Thankfully, we got through school okay – a question, as at one point Ambrose was set to fail several classes because he hates online school, and some of those classes were necessary for him to graduate. Whew! Now we just need to make it until August, when hopefully everyone will get to return to school like normal.

I’m still majorly in a book slump. I did manage two books this month, both by the same author: The Sun Down Motel and Broken Girls by Simone St James. They hit on the creepy/paranormal streak I’ve been on for months, so they were perfect for me right now. In TV/movies, my family watched Onward (pretty good) and Wendy (interesting with an ending I disliked), and I binged-watched Upload, a show I found fascinating (and ended on a MAJOR cliffhanger!).

Goals
Just like in the last few months, these are mostly on hold due to covid and quarantine protocols. We did make some good progress on our financial goals, though. Not only have we been able to make a few extra payments into our consolidation loan (paid it down by almost a quarter of the total), we decided to borrow from our 401K to pay it off completely. This will decrease our bi-weekly paycheck by about the same amount as our minimum payment to the consolidation loan, but it’ll get paid off much quicker and with only a 4% interest rate as compared to an 11% rate. We’re also now looking to refinance our cars, which have insane interest rates that should/could be much lower. And while quarantine is hard on us mentally, it has been really good for finances – less impromptu work lunches out, far less gas costs and mileage on the cars, less eating out generally, less “fun spending” like movies. Jason’s team has been told they’re work-from-home until September minimum, so we plan to make good use of the savings to pay off as much debt as possible.

I also finished Couch to 5K this month, which was a pretty big accomplishment!! I’ll talk about this a bit more in a future post.

Health
As mentioned above, this is the worst time of year for me between PTSD triggers, school ending, and the rising heat. I have not coped the best this May, though I’m proud to say that my insistence on substituting iced coffee for wine over the last six months has paid off, and my triggered anxiety no longer made me long to lull the feeling with alcohol. Yeah, I drink way too much iced coffee, but that’s a far better habit to have.

I didn’t do as much running as I wanted in May, mostly due to insanely hot/humid mornings and the massive amounts of rain/flooding this month. Pre-quarantine, I used to run around my living room on foul-weather days, but with everyone home, I can really only do that in my bedroom, and the small space makes that difficult. I really need to transition to indoor exercise generally for the space of the next few months, and I’m finding that hard. I like walking and running and hiking outdoors. 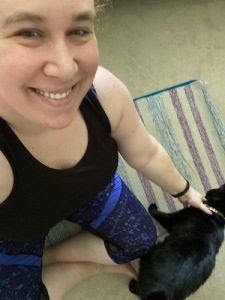 So things didn’t go quite as well as I’d have liked them to in May. I’d planned to track calories, but only managed to do so about 2/3rds of the time. I only managed 20 days of exercise, for a total of just under 13 hours. My mileage was pitiful – only 24 miles – but that’s what happens when you have to hide from the temps. (I need a treadmill!) I certainly did a lot more strength training this month than in previous months, thanks to reintroducing yoga as well as taking up boxing and some attempts at calisthenics. But generally, I’m just “holding steady” (literally weighed in the same to the ounce from 1st to 1st) and trying to take care of my mental health more than my physical health as quarantine approaches its 100th day in June.

Highlights of May
May is one of those months where it’s often hard to see the positive purely because I’m stuck in my own head. I tend to withdraw from the world more than I should, and see too little around me. I have to make a concerted effort to look at the positives. My daily photo project in 2020 is helping – I’m able to look back on images, and I’m making more effort to notice things on an everyday basis – so here is what I saw as highlights this month.

Coming up in June
My hiking group is reopening hikes in June, limited to five people each with masks and social distancing required. I’m sooooooo grateful for that. Even though it’s a bit of a risk, I need this so much for my mental and physical health. Our libraries will begin to open for curbside pickup in mid-June, which also makes me so happy. This book slump has gone on too long, and I know the libraries can help with this! One day, I’d really like to begin volunteering there again since I was unable to do so as planned re: covid. Other than that, we’re not planning much. Still hunkering down and trying to stay safe as the world goes mad around us!