I mentioned in yesterday’s Sunday Coffee that Ambrose and I were going to a blood drive. It was the first time for either of us to give blood. We filled out the paperwork beforehand and headed out to the megachurch where the drive was happening. (Ironically, we at first forgot our masks and had to turn around about two minutes from our house to go back and get them! It was the first time I’d left the house except for exercise since mid-March, and only Ambrose’s second time, so we both forgot!) It was just Ambrose and me because my two other kids didn’t feel comfortable with the blood donation process, and Jason has previously been disqualified from giving due to living in Europe as a child. (That might have changed now, because the questionnaire asked if we lived in Europe for a total of five years, and he didn’t. He’s excited about that because he used to give blood all the time.)

Our appointment was at 9:30. The megachurch isn’t far away, but I knew we might have trouble finding the right location, so we left at 9:00. We followed my phone’s instructions and ended up in the parking lot where clearly a bunch of other folks were there for church. Cars were lined up bumper to bumper in rows – how someone would get out if there was an emergency, I have no idea – and no one was in the cars, so the people must have been inside the church despite the pandemic danger. (People!!!!!!!!!) Anyway, our instructions said to go to the prayer center, but none of the signs – there were actual directional signs like you’d see in a major hospital facility or airport parking lot – listed it. The “courtesy center” outdoor help area was vacated, and there was no one around. We also didn’t see any indications of a blood drive. This was what I’d feared and why I left early. 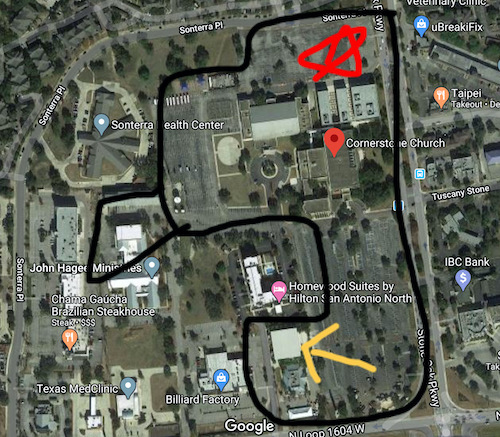 The church is described in Texas Monthly as having a 17,000-membership congregation (and that was in 2006), with “a large (5,400-seat) sanctuary, classrooms and office buildings, a prayer chapel and garden, a gymnasium and racquetball courts, and acres of parking.” (again, 2006). In the above picture, everything surrounded by the black line is part of Cornerstone (I included a little section for the pastor’s personal ministries building, too.) Ambrose and I parked around the star area. We needed to be in the building where the yellow arrow is.

Eventually, we found two guys getting out of their car – both without masks, sigh – and asked them for directions to the blood drive. They told us to drive around the surrounding block and look for the hotel, and the praise center – not the prayer center – would be in front of it. It took twenty minutes of driving and looking because the hotel was hidden mostly behind trees, but Ambrose spotted someone pushing a hotel cart, and then I spotted an understated building that was the praise center. So yeah, getting to the drive was a harrowing experience, and if I’d been alone, I would have given up! This is the sort of experience my agoraphobia is particularly anxious about!

(Photo courtesy of Cornerstone Church facebook page. This is the only blood drive sign we saw and the one I eventually spotted.)

Anyway. We made it, roughly three minutes before our appointment time. We checked in and were taken back into individual cubicles for testing. I was extremely nervous about the finger prick. Every finger prick I’ve ever had has hit a nerve of some kind and then hurts for weeks afterwards. Between the nerve-racking attempt to find the place and my nerves about the prick, I wasn’t surprised when my blood pressure showed up higher than normal. However, the numbers were SO off the charts that I couldn’t fathom them being real. I was last tested in my doctor’s office just a few weeks before quarantine, and my bp was 123/82. Higher than I like, but still normal. The machine at the drive said I’d somehow gone up to 165/116. !!! That’s an extremely alarming number! The tester said we’d take it a second time, and I let him do the finger prick just in case my nerves were affecting the test. (It hurt. It still hurts and my entire fingertip is bruised. Sigh.) When they tested me a second time, my bp came back at 117/102. A vastly different number. Also, the first test squeezed my arm so tight I thought I was going to faint, and the second test didn’t hurt at all. I can only guess their equipment was faulty (especially since I tested myself, three times on each arm, after I got back home, and averaged 129/80). 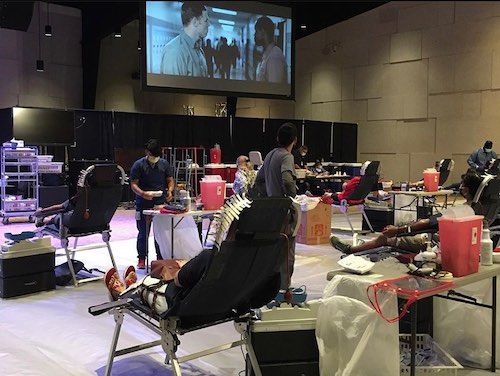 So I was disqualified from giving blood. Sigh. Ambrose, however, was able to give. I sat in the waiting area while he gave, and we watched the end of one Star Wars movie (Ambrose informs me it was the first one released), and the beginning of Big Hero 6. He got his snacks and rewards, and we headed home.

I admit that the whole experience was both frustrating and disheartening. I’d really felt good about donating blood for the first time, and I know my blood pressure shouldn’t have disqualified me. But it is what it is, and at least I tried, and Ambrose got to give. Maybe Jason and I will go to another drive sometime after my waiting period from this one is up.

Writing. Family. Books. Crochet. Fitness. Fashion. Fun. Not necessarily in that order. Note: agender (she/her).
View all posts by Amanda →
This entry was posted in Wellness and tagged health, quarantine. Bookmark the permalink.