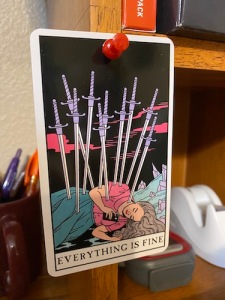 Six weeks now. Six weeks of chaos and uncertainly and fear. I worry that people are becoming complacent, and restless, and that we’re going to start opening the state next week (ie way too early). My family will continue to stay at home as long as we possibly can, and we’re just thankful that school is online for the rest of the year and that Jason’s employer plans to keep folks working from home for a few more months (if not permanently, regarding his particular team).

To repeat from previous weeks: If your mental health is at a point where you cannot bear to hear more about quarantine stuff, skip to the bottom of this post for a list of positives and highlights and Nice Things. We all need some of that right now!

Friday, April 17th
Local count: 959, 37 deaths (17 NH), 196 recovered. Well…a less exciting week in the Gignacery? The world thinks not. Jason had a teledoc appointment which confirmed his suspicions: he has shingles. He’s had them once before, when Morrigan was an infant, and they’re internal at this point rather than with an actual rash. But COME ON can we get a break here?? Ugh. 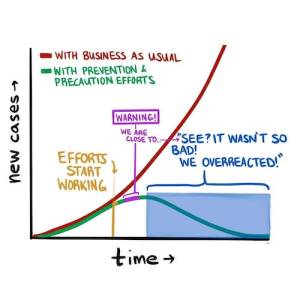 Beyond that, it was a big day in news today. For better or for worse (probably worse), the Texas governor decided to begin “opening up Texas.” Any and all retail businesses can now offer to-go services, starting on April 24th. State parks will open on the 20th (with a group limit of five), and elective surgeries can resume on the 22nd. This is way, way too soon, especially with the ominous announcement that more businesses (like restaurants and movie theatres) will likely open as of April 27th. To give some scope on this: Texas isn’t even supposed to hit its peak infection rate until mid-May!! We’ve been doing well trying to start flattening that curve, but we’re no where near flattening yet, and Abbott is telling us that we’re “tailing off” already. No! The data doesn’t support this! At least he also ordered for all schools to remain shut down for the rest of this school year. While I’m sad about this for my boys’ sake – they’ll miss the rest of UIL, prom, awards ceremonies, graduation, months with friends, etc – it’s definitely the right and safe thing to do. I understand that we need to balance the crashing economy with health and safety, but perhaps some of those million-dollar-bailouts we’re giving to rich folks and big businesses can go toward the rest of the country instead? Ugh.

In better news, our family got our small stimulus check, which immediately went toward debts, and I had a fun morning with Laurence as we brainstormed his current theatre assignment: recast a movie of your choice. He chose Clue, and we created a masterpiece: 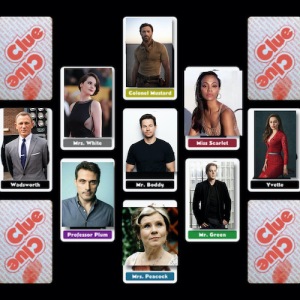 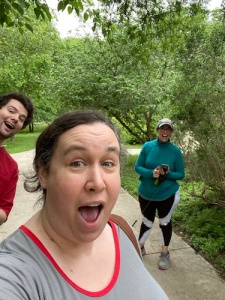 Saturday, April 18th
Local count: 992, 38 deaths (17 NH), 256 recovered. Libraries extended their closure to the end of April to be in line with the rest of the state. Large crowds took to Austin streets to protest the continued shelter-at-home order despite the insane amount we just opened up. Our mayor didn’t mince words, calling them reckless and careless, and their actions “pure ignorance.” Jason and I went out for several walks while playing HP Wizards Unite – a special Community Day made for social distancing, thank you Niantic! – and accidentally ran into a fellow hiker, Jennine. We had a bit of socially-distant conversation and a quarantine-selfie. She was the first person outside my family or Stephanie (who brought us groceries and masks when Jason was sick) that I’ve seen in over five weeks. 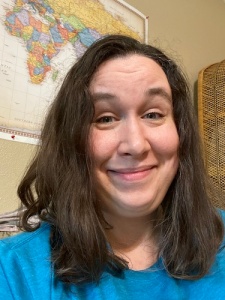 Sunday, April 19th
Local count: 1015, 39 deaths (18 NH), 296 recovered. Our daily update from the city (mayor and county judge) was a smackdown tonight. The judge in particular went off on the federal government, the Texas government, and the idiots out protesting right now. Literally the following words were spoken at times: “their dense little heads” (federal) and “Hard for me to conceive that people can be that stupid!” (protestors). Whoa. Spot on, but whoa. In other news, I overcame my agoraphobia today and entered onto a Zoom call with the podcast hosts from Real Life Ghost Stories and a half dozen of their other fans. One of the facebook members set it up and I nearly didn’t dial in because I was extremely nervous about speaking to a bunch of folks I didn’t know. But I did it. And it was wonderful.

Monday, April 20th
Local count: 1029, 39 deaths (18 NH), no recovery data for today. In good news: This is the lowest increase we’ve seen, and hospital numbers are starting to go down. If we can avoid opening up too quickly, we might get through this okay. In bad news: Over the last week, there’s been a slowly increasing outbreak at the county jail, which is up to 28 cases now. Also, there are apparently local protests planned for the weekend. *rolls eyes and stays safe at home* Ambrose and I signed up to donate blood this weekend, because there’s an urgent need for our blood type. It’s the first time for us both. 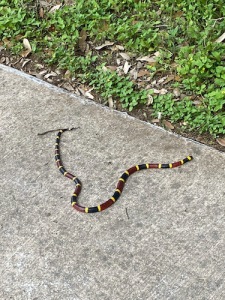 Tuesday, April 21st
Local count: 1080, 39 deaths (18 NH), 325 recovered. The TX Lieutenant Gov said that “there are more important things than living” with regards to opening up the state ASAP. He’s one of those idiots who believe we overreacted because social distancing worked. UGH. I went out running today, saw way too many people in the park – about a half-dozen, which was too many in the small park for me! – and also avoided stepping on a coral snake. Fun! I ordered a running mask from a local business and I hope that it actually works while running. Too many folks in the park weren’t bothering to wear masks or to stay six feet apart!!

Wednesday, April 22nd
Local count: 1126, 39 deaths (18 NH), 350 recovered. A second person in town has recovered from near-death after receiving convalescent plasma (with COVID19 antibodies), so this seems like it might be a viable treatment for severe cases, assuming we can get enough of the right kind of plasma. I’m really wary of the plan to reopen Texas, even more than at the beginning of the week, because the governor has now come out and said that hair salons would be among the businesses possibly opening on Friday. Somehow he thinks that masks and social distancing are possible in a hair salon. Really??

Thursday, April 23rd
Local count: 1167, 43 deaths (18 NH), 361 recovered. Not much news in the local vicinity – we’re all waiting for the governor’s announcement on the 27th to see how much damage we’re going to be subjected to. I did hear that a third person has recovered using convalescent plasma, so that’s good. And Jason’s medications – anti-virals and a lysine supplement – seemed to have really helped his shingles, because he can’t even feel them anymore. Yay!

Second graph is from the city’s website, with daily reports of numbers and deaths, rather than cumulative like my graph. Every time I think we might be starting to flatten, we have another couple high days. I have no idea how so many people think this is “under control” enough to go back to the way things were pre-quarantine…

Positives and Highlights and Nice Things
COVID19 notwithstanding, I actually had a pretty good week. Here are the highlights:

How has everyone else’s week been?