Wellness Wednesday – An Ode to My Favorite Park

Back in early 2006, my family moved into a part of San Antonio that I’d never been to before. It was close to Jason’s work and had decent schools, which were my only two requirements beyond affordability in housing. One of the first things we did was visit the local library, only 1.5 miles away from our house at the time and only open for several months at that point. The library was attached to a playground and a city park built around an old Comanche fort. A month after we moved to the area, I walked the park for the first time with a few women at the church I attended at the time.

Note: I really dislike this picture but I’m glad that I have it. I’m still friends with the woman in pink on the left, yay!

That first walk/hike had me confused and turned around. There are so many different trails and loops at that park. I did my best to remember our route when I took Jason and the boys out there the next month. They were 5, 3, and 2 years old. 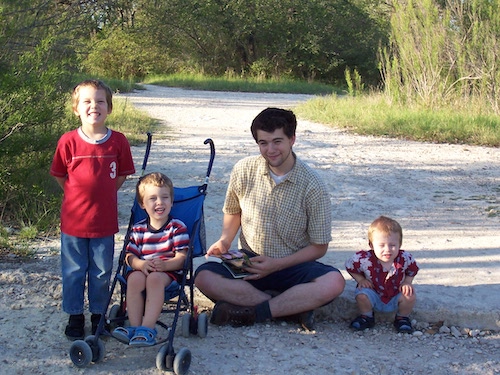 Over the years, I kept going back. In the 2007-2008 years, I walked a specific 2.2-mile route with my friends Christina and Paula several times a week. That’s when I got to really know the park well. I took the boys often as well, before or after trips to the playground or library. Around 2009-2010, fitness equipment was added around the Library Loop portion of the park. In 2011, I taught myself to run there, and ran my first full non-treadmill 5K there in 2012. In 2014-2015, I walked with friends when I needed emotional support, and visited the park on vacation when I was living away from San Antonio. The park became my family’s go-to area for Pokemon Go and later Harry Potter Wizards Unite.

Hundreds of visits. Hundreds upon hundreds. This park is my very favorite outdoor space in San Antonio. I go there now not just to exercise, but to feel at home. I see deer and birds and snakes and rabbits and squirrels along the paths. I know each surface and each path. I know all the regulars – the elderly man and his giant dog; the extremely thin man who wears shorts, parka, and beanie no matter the weather; the petite Asian woman with giant hats and the tiny dogs; the brother and sister who always walk at least six feet apart as if they aren’t hiking together. I feel safe there. I feel like I’m home.

Agender empty-nester filling my time with cats, books, fitness, and photography. She/they.
View all posts by Amanda →
This entry was posted in Wellness and tagged Wellness Wednesday. Bookmark the permalink.