One of my favorite Christmas traditions involves a few tree ornaments that Jason and I bought way back around 2003: 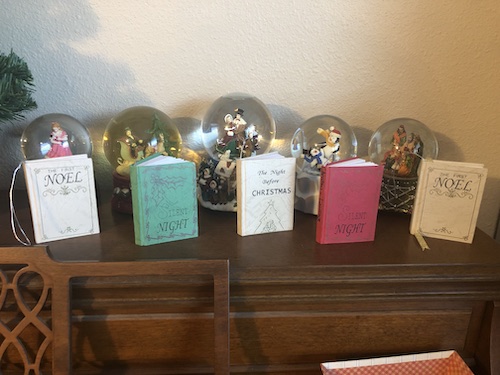 Though they are meant to hang on the tree, we’ve never put them up there. They’re full of blank pages, and we chose to designate one book for each of us. When the boys were very young, we told them to each write a story in their book. Morrigan was about seven years old and was able to write and illustrate his story alone. Ambrose, at five years old, was able to write his – but the words were pretty illegible, so Jason penned in the real words so that we could continue to read every year. Laurence, age three, wasn’t all that great at writing letters yet. Instead, he told Jason what words to write and drew the pictures himself. Every year, we reread these three stories aloud. Every year, the boys either get giddy over the prospect, or groan aloud at how bad they are. Doesn’t matter. It’s tradition, and one that we all love (even in those teen years when we claim we hate it). 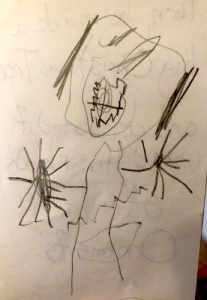 Once upon a time, there was a tiger. He bit someone’s hand. He was a very naughty tiger. Then, he made a big Christmas tree, and decorated it with different kinds of ornaments: a cake, balls, and a star on top. There was a stamp of a Christmas tree on one of his kitchen counters. He didn’t have any blinds on his curtains, so the sun came in…and knocked the calendar down! The calendar had a big Christmas tree on it. His house was like our house, but with different toys. The tiger used up all the oil in his oil can to make a meal. The end.

Ambrose: The Girl at Christmas That was Bad 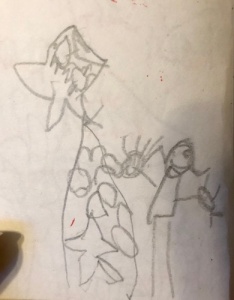 Morrigan: The Girl That was Bad on the Day Before Christmas [Mom’s note: he didn’t know what to write so he copied Ambrose’s idea. We tease him about this every year.] 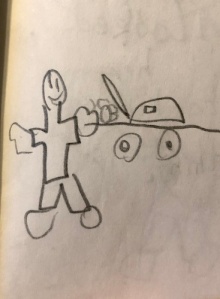 Once there was a girl who was never in trouble when she was bad. She was bad almost every day! [pictures labeled “the girl” and “the mom” with the latter saying “You are not in trouble” in a speech bubble] Then one day before Christmas she did something very bad. She opened the car motor. But, no punishment. Then, the next day, she looked in her stocking. Nothing. [picture: girl with speech bubble “what?”] Then, she dumped it out to make sure. Do you know what was in her stocking. The food she hated most, chicken noodle soup, and a pet grasshopper. The bug she hated most. That tought [sic] her a lesson. Do not ever be bad. And she didn’t. The end.

*****
I just adore these ridiculous stories from the minds of very young kids. I wish I could have included all of the illustrations but the ones I did will have to do. Also note: Jason never wrote a story for his book. I wrote a short story for mine but we never read it because it’s too long. The boys later wrote varying amounts of “sequels” or other stories in their books in later years. (Morrigan’s, called “How Gingerbread Men Were Made,” only says “Up” before he gave up on it, ha!) There are still plenty of pages left. Perhaps one day there will be grandkids to fill them up with other toddler-aged fun stories. And groan while grandma and grandpa gleefully read them aloud to embarrass them. Ha!