WW: The F*ck It Diet, by Caroline Dooner (audio)

Subtitled: Eating Should Be Easy 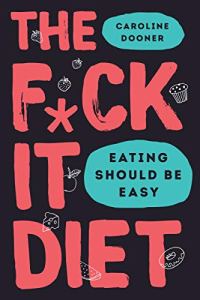 First, let me say that this is not a diet book despite the title. This is a book about the way diets affect metabolism and body set point ranges and mental health, coupled with reasons why we should all stop dieting and simply eat. There’s more to it than that, but that’s the gist of it.

This is a hard review to write because so much of the book hits on personal notes. I could talk about how my first diet gave me hypoglycemia; or how my first experience with Weight Watchers post-pregnancy had me eating something like 900 calories a day, and yeah I lost weight but you’d better believe it piled back on the moment I was pregnant and couldn’t be dieting anymore; or how my Whole30 experiment felt awesome as I lost 12 lbs in four weeks while eating the same number of calories, but then I gained nearly 60 lbs in the year following that experiment and there was nothing I could do to stop it. These are all textbook examples of what the book talks about, diets backfiring and messing with your metabolism and body weight set point, diets causing disordered eating habits and hormonal imbalances, etc.

At the same time, I’d like to critique the book in a less biased way, because when I take a step back from the “yeah, yeah, this happened to me too!” I can see that there are some gigantic flaws here. Mostly, there’s a lack of science. Sure, there’s a lot of referencing experiments, like the Minnesota starvation experiment, but often the experiments dealt a lot with correlation and not direct causation. Plus, there were just too few of them. Dooner talks about how we should all just eat whatever we want with no restrictions at all, because all our dieting has caused us to be in a low-grade (or high-grade, in some cases) starvation mode and all the over-eating is our bodies trying to repair themselves. In theory, this makes sense for a certain kind of person and a certain kind of weight gain and a certain kind of diet. But like any “diet,” it’s not catch-all. Not every person will benefit from saying “f*ck it” and just doing whatever we want.

Personal story/example: Back in my 20s – when I was dealing with my severe tooth illness that was causing all sorts of problems including giant, sudden weight drops and gains – I spent a decade trying to figure out what was wrong with my body that was causing all this sickness. Doctors couldn’t figure it out. I couldn’t figure it out. I ate a relatively healthy diet and was fairly active, but nothing I did seemed to matter. I’d go months with a stable weight, and then I’d drop or gain 20 lbs in two weeks with no change in my habits. In May 2008, after a 20-lb gain over a single weekend, I gave up. I did exactly what this book says to do, and said F this! For a year, I ate whatever the hell I wanted, rested as much as I wanted, and said screw my weight since I couldn’t do anything about it anyway. Over that year, I had three 20-lbs weight jumps, and no weight drops. I went from mildly obese to morbidly obese, and hit my highest weight ever. My cholesterol went from healthy to off the charts. My glucose and a1c did the same. All my blood numbers went from being good despite my size to “holy hell you need to do better.” All my previous efforts to eat well and exercise regularly weren’t helping me to lose weight during that decade of illness, but they were helping me to stay healthy and not gain TOO much. And as soon as I finally DID find the cause of that illness and get rid of it, my eating healthy and exercising regularly helped me lose 100 lbs slowly over 3.5 years, and then maintain a newer, 25-lb higher set point range for nearly two years.

To be honest, my impression of this book is that it mostly works for folks who have spent a long time worrying about their weight despite being relatively normal sized. There’s plenty of quotes from people of all sizes who talk about how this book worked for them, but no actual evidence or data. The ideas behind the book’s premise takes old data that may or may not have causation involved, and turns it into a “what-if?” situation that apparently has worked for some people, though we can’t be sure WHY it worked. Dooner references the Health At Every Size movement a lot, and while I appreciate the sentiment of HAES, I’ve tried to read the original book/data regarding it, and found it to be another example of a relatively normal-sized person trying to turn correlated data into causation. This is not a one-size-fits-all situation. Hell, in my own life, I’ve seen multiple times how underlying illness or conditions in my body will cause me to gain weight, as if my body is trying to tell me: “Hey! See how I’m gaining for no apparent reason? This means something’s wrong and you need to figure it out!” If I ignored those symptoms, I’d just grow more and more unhealthy.

I do like a lot of the writing prompts and ideas in the book, but I found The F*uck It Diet to be fundamentally flawed in so many ways, despite knowing that a lot of the concepts underlying the premise to be sound. But the good thing is that Dooner says flat out that no tool is universal and that you should be wary of anyone who tells you what’s best for your body, including her. Personally, I think this would have been a great book to read back when I was at that higher set point weight and sad about not getting any lower (sad enough to try things such as Whole30, which REALLY messed me up!), but it isn’t such a great book for me now, when I know for damn sure that I didn’t just acquire a 60-lb set point increase over the course of a year. It gives me a lot to think about when my PCOS doctor recommends ridiculous measures such as a 1200-calorie low-carb diet while taking a weight loss drug, and helps me to have a more open perspective about my body in general. So the end takeaway is mostly positive, even though I think the fundamental ideas behind the book are flawed.