In the Navy Now 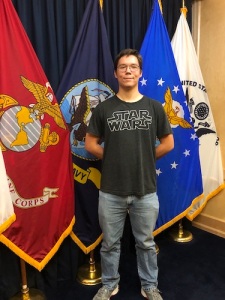 Holy donkeys the last two weeks have been a whirlwind. After Morrigan learned he would not be able to go up to school in Kansas, he began last-minute searches for new plans. He applied to the local community college. He applied for full time jobs. He started looking at junker cars to buy. And he scheduled to see both Navy and Army recruiters to see if those were viable options instead of doing college first as originally planned.

Long story short: After several intense days of paperwork, background checks, discussions, and tests, Morrigan decided to join the Navy. He scored off the charts on the ASVAB and qualified for the nuclear program. A year ago, before he decided to go into Japanese in college, he’d spent years wanting to go for a biochem degree, and the nuclear program is designed to graduate its candidates with an associates in biochem with options to enter further schooling. It all seemed perfect for him!

On Monday, Morrigan went overnight to do the medical testing with hundreds of other candidates bussed in from all over, and a bunch of ceremonies took place Tuesday afternoon. Morrigan swore into the Navy and signed his contract.

At present, he has a ship date set in March, but there’s a strong possibility that’ll be moved much closer since he’s just out of high school and his clearance shouldn’t take as long to go through. Jason and I meet with his recruiter this afternoon at her request. We’re all just trying to wrap our heads around this, with all the other changes, and we’re happy that he’s happy and excited about the next part of his journey.

Agender empty-nester filling my time with cats, books, fitness, and photography. She/they.
View all posts by Amanda →
This entry was posted in Personal. Bookmark the permalink.