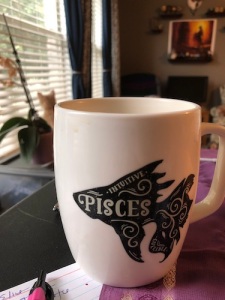 I meant to post Sunday, but life went from the planned “busy” to the unplanned “insanity” over the weekend:

Jason’s parents were due to arrive either Wednesday evening or on Thursday. They were driving down in their RV, which they just purchased used, which may not have been the best choice as first their a/c went out in Oklahoma and caused the first delay (now they should arrive Friday), and then their brakes went out about an hour north of San Antonio and left them stranded on the side of the road. Jason had come home from work an hour early to help us with all the baking, prepping, shopping, and decorating we were doing for the next day’s events. He immediately had to go out in Friday rush hour traffic to go pick up his mother. The hour-long trip took two hours re: rush hour, and Jason’s dad had to stay on the side of the road while he waited for a specialty tow truck. Then when that finally arrived, the RV was carted off to New Braunsfels to a place that claimed to fix RVs…until the RV actually arrived around 10pm. Grandpa had to park the RV in a lot and then Jason had to drive another hour north to get him and bring him back to San Antonio, finally getting home around midnight. And of course, Grandpa had to drive back to New Braunsfels between the two events on Saturday to move the RV to another dealership to fix.

In the meantime, my mom called to tell me that my almost-91-year-old grandpa was in the hospital with a septic gallbladder, and my family was doing hospital rotations to be with him and my grandma, so no one knew who would be where the next day during the grad party. (No new news on this yet, and with all the crazy I haven’t been able to go see him yet. Hopefully soon.)

Saturday at least ran mostly smoothly. Morrigan had decided to get baptized into the LDS church, which happened Saturday morning. Then we had about an hour or so to get ready for his graduation party (hence all the prep work the day before) while Jason’s dad went up to deal with the RV. We did all the last minute prep and were ready when guests started to arrive. The party went smoothly. People seemed to enjoy it. There wasn’t a lot of cleanup. That’s about the best I could hope for! Afterwards, we all went out to eat and then crashed out early.

Sunday was a catch-up day for cleaning and paperwork, and of course prepping for Monday, which involved graduation practice and the actual Graduation event. Monday was a long, crowded, hot, chaotic day, but a lot of family showed up to watch Morrigan cross the stage, and we got some good photos afterwards. My favorite was of the boys together: 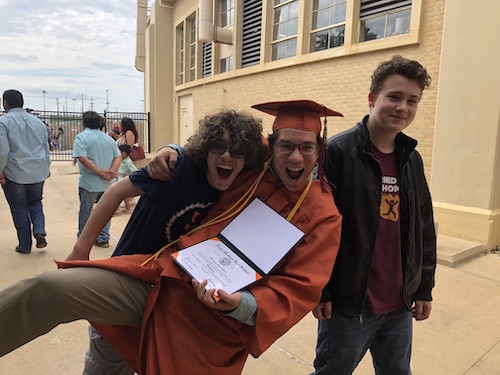 After graduation, we spent nearly an hour in rush hour traffic (sigh) then had dinner at Texas Roadhouse, one of Morrigan’s favorites. Then it was home-and-crash-in-bed time! Today, Jason is back to work, and I need to go do all the chores and paperwork and errands that we’ve neglected for the last week before Morrigan’s oral surgery (wisdom teeth removal) tomorrow morning. Busy busy busy! See y’all soon!