The 7 1/2 Deaths of Evelyn Hardcastle, by Stuart Turton 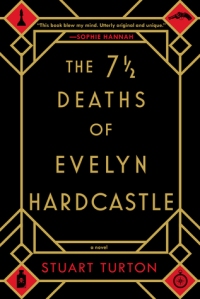 From the book flap: Evelyn Hardcastle will die. Every day until Aiden Bishop can identify her killer and break the cycle. But every time the day begins again, Aiden wakes up in the body of a different guest. And some of his hosts are more helpful than others…

Bryan from Still an Unfinished Person brought this book to my attention. It’s a sort of Groundhog Day meets Quantum Leap mashup, with a lot of philosophy about what it means to be yourself mixed in. Aiden Bishop has eight hosts to solve a murder, a race against time in a day repeated eight times, starting with no memory at all at the beginning of the first host’s day, but carrying over into the next, then the next, then the next. Some of the days weave in and out of the book, making a lot of the story a bit of a loop with clues scattered throughout previous days. That made the mystery just about impossible to unravel ahead of time (nice!) and made me want to go back and reread to spot all the different things I’d missed. I have yet to do so, because it’s also a ponderous kind of book, a bit slow (in a good way), which means I want to give it some time to really percolate before revisiting.

Irony: In most thriller/mysteries, I lament the current trend toward extra unnecessary twists. In this book, I was expecting more twists at the end, and felt that the ending/solution/explanations were a bit too simple for me. Heh. However, I’m pretty sure I won’t feel the same about the ending on second read. This is the sort of book that gets more satisfying with a deeper reading, and the ending – while too simple on first read for me – will be thicker and more meaningful once I’ve read past all the actual plot sections to the more philosophical sections. I look forward to that.

I don’t want to say more because there would be way too many ways to accidentally say too much and take some of the magic of discovery out of the novel’s unfolding. Even the book flap and GoodReads descriptions really say too much. I don’t usually care too much myself about spoilers, but this is a fun one to unravel, so I recommend going into it as blind as possible.

7 Responses to The 7 1/2 Deaths of Evelyn Hardcastle, by Stuart Turton