Song of Blood and Stone, by L. Penelope 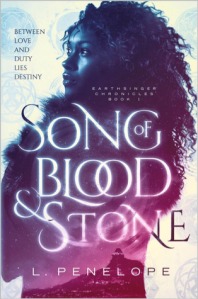 The barrier between a magic land and a non-magic land is breaking. War threatens. Out in a remote cabin on the non-magical side, Jasminda is unaware of the impending danger. Her entire family has passed away before her, and she struggles to keep her home in the face of her country’s prejudice, as she is half-magical from a mixed-race family. Jack is trying to escape from the magical army he infiltrated as a spy, and stumbles upon Jasminda while gravely injured. She tries to heal him and help him on his mission, but as always missions aren’t clear-cut and may do more damage than good in the process.

This is the book I should have started 2019 with! This was fantastic!! Everything about it was good – the writing, the conflicts, the characters, the pace, the integrated world-building, the folktales that began every chapter. I’m not sure how I stumbled upon this book but I will now sing its praises to everyone. I cannot wait for the next volume in the series. Things I particularly loved:

– There are a lot of “twists” that are obviously coming, but the characters aren’t surprised by them and often figure out what’s going on pretty quickly. Twists and revelations are often in books, but it’s rare to see characters figure them out almost immediately rather than having to stumble along in ignorance forever and be intensely surprised when they’re revealed.

– None of the characters were wholly good or evil. Everyone had reasons behind what they did, whether those actions were good or bad.

– Multiple political viewpoints were addressed, with valid reasonings (if not always compassionate reasonings) behind each of them. People didn’t always act rationally, and sometimes they found strength and compassion through growth while others found only greater hatefulness and spite.

– Deeply-rooted personal and societal prejudices were not easily overcome, and in some cases not overcome at all. Folks who held nothing against people different from them still easily used derogatory slang, not thinking their words hurt or meant anything bad. Folks who discovered that their long-held belief systems were based on a lie didn’t change, but created new belief systems to accommodate their old thoughts. Nothing systematic can be overcome even at the advent of miracles, and this book doesn’t pretend otherwise.

– (mild spoiler) Jasminda isn’t a “chosen one.” She ends up the center of things by pure circumstance and family heritage, and in the end, her magic is weak and unable to help much in the ultimate conflict/crisis. Other, stronger magical folk have to step forward, and Jasminda has only her personal strength, determination, and grit to rely on. In a book that pits the magical against the non-magical, it was wonderful to see a woman with magic rely on her non-magic strengths to succeed.

I loved so much more than these but I don’t want to create a novel here in this post. I do want to note one small thing regarding the book’s label. I’ve seen a lot of people mark the book as young adult on Goodreads, but this is not YA. Jasminda may be nineteen, but there are a lot of adult topics and adult scenes written out. This comes with a potential trigger warning as well –  there is attempted rape in this novel. However, if these things aren’t problems for you, I highly recommend getting ahold of Song of Blood and Stone.

2 Responses to Song of Blood and Stone, by L. Penelope