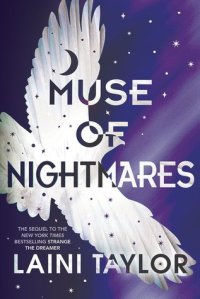 Warning: Mild spoilers for Strange the Dreamer, but none for this book.

Now that Lazlo has awoken his abilities and Sarai is “differently alive,” everything has changed. Lazlo faces a choice: betray the person he loves, or betray the entire city he loves, including all of his friends. It’s an impossible choice, one he can’t make, and as he tries to puzzle through to a new solution, a new enemy comes to call.

It has taken me a long time to decipher what I want to say about this book. I loved Strange the Dreamer and have read/listened to it three or four times since it released. The book is subtle and heavy on friendships and full of so many threads that have to find their way to each other. It’s one of the most beautiful books I’ve ever read. Muse of Nightmares was one of my most anticipated books this year, even more so not knowing if it would come out at all in 2018. I preordered the audiobook the second it was available, and likewise began listening immediately on the release date.

Let me start by saying that this lead-up makes it sound like I’m disappointed in the book, or that I disliked it, neither of which is the case. I loved it from the opening chapter, where we meet new characters, and new storylines emerged. The suspense from the end of Strange picks right back up in the Citadel, so that the beginning of the story is flush with tension. All throughout, I kept wondering how things would tie together, and how there could be so many hours left in the audiobook when it seemed like the end was so close. Then a new thing would happen, and my predictions would unravel, and the story would go places I hadn’t expected at all. I found myself several times begging characters (aloud) to step up and do what they could to repair or save situations. “Come on, Minya! Come on, Suheyla!” And the ending was just perfect. I thought this was a trilogy, but it appears to be a duology instead, with a closed off story and the potential to unlock future stories set in Taylor’s series of worlds.

The problem I’m having now – with the book, with writing a review – is that I feel like I’m too close to the book to properly evaluate it. The same thing happened when I read Dreams of Gods and Monsters, the third book in the Daughter of Smoke and Bone series. When I first read it, my remarks were that it felt rushed and random toward the end, that threads didn’t come together. I admitted that this was probably my own fault, reading too quickly so that the last 200 pages were a blur. And indeed, when I went back and revisited the book via audio three year later, nothing felt rushed or random or hanging. Everything came together well, and the story was picture perfect throughout. While I don’t have quite the same quibbles with Muse of Nightmares, I have the distinct impression that it’s the same situation. I listened to that audiobook in two days, dropping everything to just keep listening. I rushed instead of savoring. And some things nagged at me: a plot element seemed too convenient; some of the more serious elements (like death) were handled too casually for my liking; so much of the story took place on the Citadel with the same five characters instead of an even spreading around through the cast.

There are beautiful things too, though. The bond of sisters who can only rely on each other. The toll it takes on a person to endure years of hate in order to protect others from the same. The regrets in realizing you’ve missed opportunities, and the discovery that change starts at this very moment, not at some time in the past that you’ve missed. There is ever-expanding love and friendship; there is newly awakened mothering instinct; there is the struggle between the need for vengeance and the grief that is left when you realize you’re too late to the fight. So much in this book, and I just need time to process it all.

I’ve already begun a second listening of the story, with the aim of going a lot slower and really soaking up all the elements. While I don’t think that it’ll entirely dispel my discomfort with a few things – that, I imagine, won’t come until I look back at the book after a year or two of distance – it’s been helping me to get my thoughts and feelings grounded. As I said above, I did love the book and series. I just wish I loved this second book as much as Strange the Dreamer. One day I will, I know that for sure. But for now, I can’t seem to fully wrap my head around the entire book and the giant narrative world that it encompasses.

Performance: Steve West reads this series and does an absolutely amazing job. I’ve only listened to three books that he narrates, but he’s fast becoming one of my favorite audio narrators.