Seven years ago, when I was on my first weight loss journey, I began with some very basic principles. My goal was to eat “healthy but reasonable,” a way I could eat for the rest of my life. I would cut back on excess junk and snacks, but not cut it out altogether. I would make myself eat more produce, a hard task for me. I would also follow intuitive eating cues, both by removing all distractions while I ate (no phone, no tv, no books, no computer, etc) and by eating until “no longer hungry” rather than “full.” On the exercise side, I planned to do 5-6 hours a week of primarily cardio with some strength training, mixing up higher- and lower-intensity workouts. Additionally, I restructured my life so that it included more balance, more interests, more sleep, and better habits. After two months, I added calorie-counting via Sparkpeople to my routine.

This basic plan worked for me for quite some time. To get an idea of a typical day’s diet for me, you can look at my review of Around the World in 80 Diets. That was an actual day’s food around the time of that review, and is more or less representative of what I was eating at the time: a healthy-but-reasonable diet. After nine months and a lot of weight lost, however, I ran into a bit of a wall. Insomnia struck in a major way, and my weight loss rate cut in half no matter what I did. And what does any self-respecting data-nerd do in this situation? They tinker. And I did. I changed up my exercise routines and plans, my macro-nutrient ratios, my number of calories, all sorts of things. Through the tinkering, I managed to continue to lose, albeit slowly, until around when I hit my original goal (Feb 2013). After that, my body just stopped.

I wanted to lose another 20 lbs, so stopping was frustrating. No matter how much I tinkered, nothing happened. That made me desperate, so I began trying out crazier and crazier things. Cutting all processed foods: good but unsustainable. Shakeology: Ugh. Weight Watchers: way too little food! Heavy weight lifting: major PCOS-related inflammation and gain. Gluten-free due to a medicine issue: no change. Whole 30: excellent, but not sustainable, and caused massive regains with the slightest deviation from the plan. A less-strict Paleo: caused massive dehydration within five days. And so on.

I’ve tried so many things over the last few years, and nothing has helped. Even cutting out sugar to minimums only helped for about two weeks! I’m 70-80 lbs over where I’d like to be and that’s not really changing. Sometimes it feels that I’m simultaneously standing in my own shadow and blocking my own path. You’d think it would be easy to forget everything I’ve learned over the last few years and just go back to those very simple “healthy but reasonable” basic goals: Eat moderately, increase produce, exercise often but not overly much, and pay attention to your body’s cues. It’s not simple, though. It’s not simple to follow these rules and watch how slow the scale crawls when you’ve seen how it races while doing Paleo. It’s not simple to keep going as your body resists because it’s trying to protect you from the famine of losing. It’s not simple to eat well when you’ve suffered from nearly seven years of constant insomnia that no doctor has been able to diagnose or help. 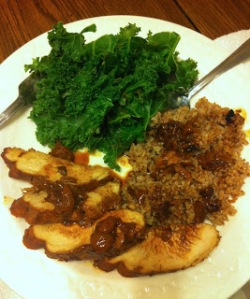 Still, I’m trying. Trying to stop standing in my own way with all the extraneous information and baggage I’ve picked up since 2013. Trying for basics. I need to remember the things I learned in the beginning: I’m more likely to eat a salad if I throw a couple croutons in it. Having some frozen chicken nuggets in the freezer as a back-up emergency meal is better than needing to grab fast food. If a sprinkle of sugar helps me eat a bowl of berries, that’s better than not eating the berries at all. It doesn’t matter if the boys don’t like the vegetables we prepare for dinner, we need to prepare them anyway.