I said it before and I’ll say it again – it’s birthday month in our house! Laurence’s birthday is coming up this Tuesday. He’ll be fourteen. The boy is taller than me now at 5’8 and nearing the end of middle school. He had his party yesterday, with just family and one close friend over, and he chose a “fancy” theme. This meant that guests had the option to dress up for the party (it was about 50/50 who did this), and we made fancy snack foods (like baked brie and bacon-wrapped-stuffed-dates). Laurence likes his parties to be very low-key, so he usually keeps the guest list very small (he considered asking no one to come this year) and the games to a minimum. 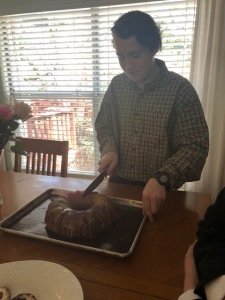 That was pretty much the run of it this year. I got some good pictures – cutting the cake, Laurence in his new Ravens’ chef hat next to his grandmother (who wore a party hat like in Go Dogs Go), Laurence making the “serene yoga woman” face that came on the packaging of his new yoga mat…ha! We actually pulled out the yoga dice gift that I got for my birthday last week and spun to see what moves everyone had to do. My half-sister (who is only eight months older than Laurence) did awesome on them all! And she almost never does yoga!

Laurence got some good presents too, including a basketball and hoop from his Wisconsin grandparents, a bunch of stuff for his X-Wing games, and a ton of Ravens merchandise. (Can you tell he’s the sporty one of the family?) After everyone left the party and we got the house cleaned up, we went out for dinner at a local favorite restaurant. He’ll have his special dinner (General Tso chicken) on Tuesday for his actual birthday. Happy birthday, Laurence!

Tomorrow is the start of spring break for us. Wish me luck as the boys are home 24/7 for the next week!