One of the big reasons my health has suffered so much the last four years has had to do with a lack of a support system. I’m a social creature at heart, and I don’t do well going it alone for things like weight loss and fitness. Take, for instance, the beginning of my weight loss journey in November 2009 compared to when I actually began losing weight in 2011. In 2009, I had a spark of motivation and a couple things I worked on. For about four months, I lost a little weight and felt good, but eventually I just stopped. It was too hard doing everything on my own, and I went back to maintaining the small loss (20 lbs) that I’d managed. Then I began again in 2011. It likely would have been the same, except for two things: For a month, a group of friends and I had a weight loss team competition, and after that, I discovered Sparkpeople, a social network for weight loss.

That first competition helped me to have constant contact with seven other people trying to lose weight, including my husband. Then, once that was over, I immediately met a whole new group of people, both online and in person, and gained access to a lot of weight-related information I hadn’t had before. I had a platform to tell my story (long before I ever shared via this blog!), and I had people to support and who could support me. We participated in 5Ks, attended dinners and fitness events, trained for a walked half-marathon together, had online challenges, joined fitness classes, and more. All of the constant support and reaching out helped me to stay on track until my food and fitness habits were so well-ingrained and my weight loss journey so far in that I could keep going on my own if necessary. 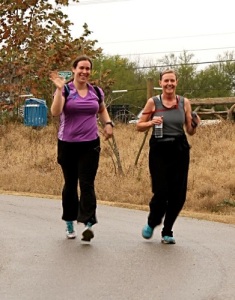 And I did. Sparkpeople wasn’t always very active as members came and went, and there were times when my brain was focused elsewhere as well. But I still kept going, and eventually hit my goal weight, and continued to maintain that goal for a long time afterwards. Even when stress and adversity hit, I did fine- until we moved. Suddenly, my entire support structure – not just people, but familiar neighborhoods, routines, weather, etc – fell apart. I tried to reach out to the local Sparkpeople groups in Boston, but they were nonexistent at the time. I still had my San Antonio Sparkpeeps, but there were no more meetups, shopping trips, group walks, dinners, or coffee dates. My virtual world was still there, but in the physical world, I was alone.

I’ve been that way ever since. Sparkpeople has essentially disintegrated by now. Almost everyone I knew there is gone now. The local team is completely inactive. The focus of the site is now on a communal public thread somewhat similar to twitter, and I’m just not interested. My online yoga community was nice in January, but since the TRUE challenge finished, there’s almost no one there anymore. None of my family struggles with weight or health issues, so I’ve found they can’t really help me at home. I’m alone in this, beyond my virtual friends.

As a social creature, this is hard for me. I do still have friends in town, of course, but many live much further away now, or have moved away, or are wrapped up in situations that don’t allow for morning walks or weekend 5Ks or other gatherings. The Yoga With Cats weekly meetup is nice, but it’s not (as of yet) something that resembles a support group or a potential new set of friends. This all makes me feel a bit  hopeless, like I’m left to my own devices and I’m unsure if I have the strength to do this all alone. I know I need to find something, but I’m at a bit of a loss at the moment.

I do, however, want to thank the small group of online folks who are ever-supportive of me on this journey. Y’all are my lifeline at the moment, and I really appreciate you!

Writing. Family. Books. Crochet. Fitness. Fashion. Fun. Not necessarily in that order. Note: agender (she/her).
View all posts by Amanda →
This entry was posted in Wellness and tagged Wellness Wednesday. Bookmark the permalink.