Basement – Before and After

Back in April, when we began our basement remodel, we began with an eye toward putting our house on the market by the end of the summer. It takes time for houses to sell in this rural an area, and we thought a year on the market would give us a good chance to sell so that we could move to San Antonio in the summer of 2018. Of course, all that changed, and so in late May, we set to focusing all our attention on the remodel.

As I mentioned in the first link above, our original basement consisted of a finished master bedroom with walk-in closet, a finished family room, and two partially-finished rooms. We planned to update the ugly family room, including expanding it into a section of the current utility room, and add a bathroom. Flooding caused us to also do some repairs/revamps to the master bedroom, and to basically redo the walk-in closet altogether. (Sidenote: who puts paneling over non-moisture-resistant drywall directly over cinder block basement walls?? All that stuff had to go!)

This post will mostly be pictures. I’m going to start with the “before” pics. Note that all these were taken when we were looking at the house, before buying it, so the previous owners still had a lot of stuff lying around. Also, I didn’t really take pictures of the closet, either before or after. 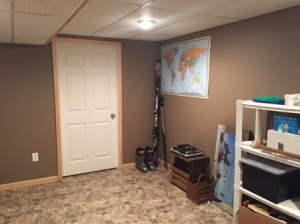 Master bedroom – nice enough, and we weren’t planning to actually change anything.

The area that eventually became a bathroom

Altogether, the remodel took about three months and would have taken less if flooding hadn’t kept interfering! I updated the project more regularly on Instagram, but here are the final “after” photos: 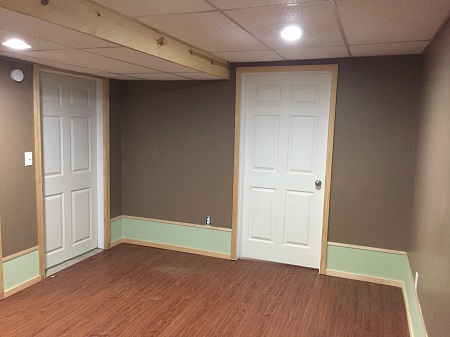 Master bedroom – This is really more of an “in-between” photo. We thought it was an after photo, except for a few faceplates we had to put on. After this, though, flooding caused us to rip out part of the wall and revamp everything, and then a spot-checking paint mishap caused us to repaint everything in this room. By that point, though, all of Ambrose’s stuff was in here, and I didn’t retake full-on after photos. Besides, this is when this bedroom looked best, so I prefer to pretend it ended here. Heh. 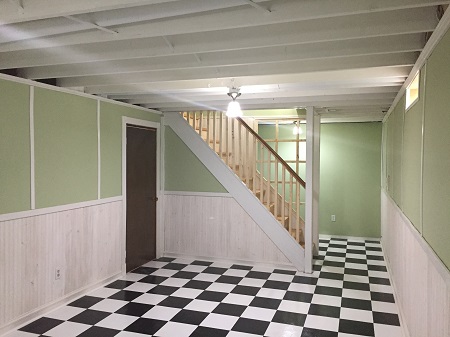 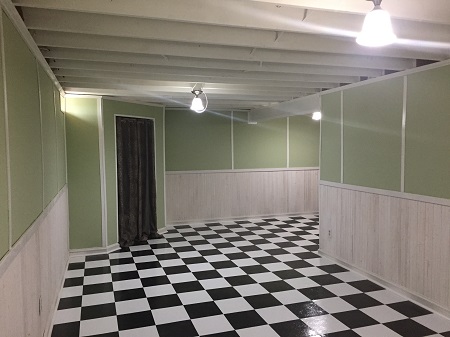 Family room, including the L-shaped nubbin that we expanded, and the new staircase that was 90% built from scratch. Later we made this into our sports-and-recreation room, including a table for gaming or puzzles and our exercise machines. 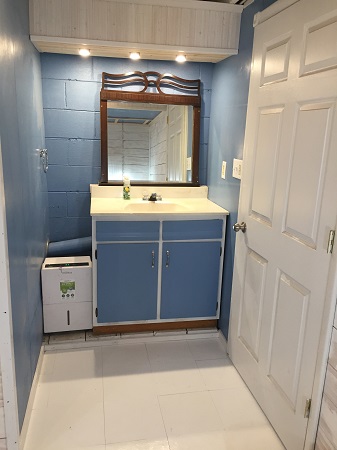 Bathroom (or half-bath, as we decided to keep things simple)

We’re quite pleased with how things turned out. Unfortunately, it’s unlikely to help the value of the house when it comes to selling (so says the realtor, anyway), but hey, we feel good about it. Plus we all got to learn a lot of neat skills. The boys did a lot of plumbing and electrical work, as well as using a lot of different saws, tools, and nail guns. I was in charge of flooring, painting, and white-washing, plus overall design concept. Jason is really great at taking my ideas and turning them practical, and he was master in charge of plumbing and electrical work. I admit – we’re all excited to not have much to do in the way of rebuilding stuff in the near future! After the last two years – construction at two different houses – we’d like to be done now, heh.

Writing. Family. Books. Crochet. Fitness. Fashion. Fun. Not necessarily in that order. Note: agender (she/her).
View all posts by Amanda →
This entry was posted in Personal and tagged house. Bookmark the permalink.

2 Responses to Basement – Before and After