Plus One, by Elizabeth Fama (audio) 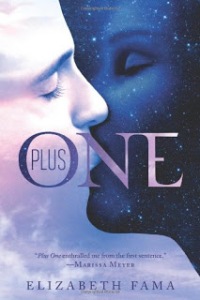 In the world post-Spanish flu, the population has been split into halves: those that live and work in the day (Rays) and those who occupy the night (Smudges). The choice of which half you’re in has more to do with genetics than ability, and once you’re born into one or the other, it’s rare that any change will occur. Sol is a smudge, working a tedious after-night-school job while looking after a grandfather who is dying from cancer. Her brother is one of the miracles, having been switched over to a Ray a couple years back, and he and his wife just had a baby. Sol’s grandfather wants nothing more than to see his great-granddaughter before he dies, and Sol is determined to make that happen. She cannot contact her brother, so instead, she embarks on a foolhardy plan to injure herself and kidnap her niece for a day.

First note: I got this book via Sync YA.

Second note: At first I thought the book was self-published because Sync YA says that the audio production is via the author. Some inconsistencies in the text (see seventh note) seemed to confirm my suspicions. However, I looked the book up after reading and discovered that this was published by a division of Macmillan. I don’t know if the audio portion is self-published or self-funded or what. I do know that the narrator (Julia Whelan) is a fairly prominent audio narrator.

Third note: The audio included original music by what I assume is a relative of the author’s, given the same last name. The two original music sections appeared first in the middle of the book, sung and played, and then at the end when the book was over. While Julia Whelan read the audiobook and did a fine job with it, I don’t believe she was part of the singing/music-playing. Most of it was a male voice, and the parts with female voice didn’t sound like her. Either way, I enjoyed the audio production, but not the original music sections. I found these interludes irritating and unnecessary. The first one is broken into sections with narration between, so I couldn’t skip it, but I skipped through the last song. Only after it was done did I realize the book was over and the last half hour of the production was a prequel short story.

Fifth note: The story itself was interesting, just the right level of tension, enough hints going on that I figured out a few things beforehand but not others. But again, it wasn’t life-changing, and I’m fine reading it as a standalone. I think it worked well that way.

Sixth note: That’s kind of a moot point, though. While this is supposed to be the first in a series, it came out in 2014 and there’s no entry for anything further on GoodReads at this point.

Seventh note: I started noticing a few odd things about this alternate dystopian history. It’s a close alternate, with technology advancing similarly to ours. I could accept that they had texts and cell phones and such. Sure. But I was a little startled, first, to hear the narrator described by another character as looking like she came from a concentration camp. I associate concentration camps with WWII, which is of course after the split in the alternative history. So I looked up concentration camps and discovered that while they are most associated with WWII, that particular name was ascribed to prison and internment camps as early as the mid-1800s. Woohoo for new facts! However, then some makeup was described as being like Betty Boop, a cartoon character that didn’t appear until after the split in the history here. I can accept – maybe – that a character is described with a word that didn’t become popular until the 1940s our world, but I have a much harder time thinking that Betty Boop would also make an appearance in that close alternate world.