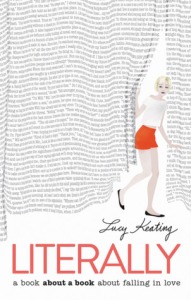 Annabelle has the perfect life – until the plot-twists begin. Suddenly, her parents are separating and they’re selling the house she’s grown up in. A new boy appears at school and he’s perfect for her, but Annabelle is drawn toward another boy she’s always hated before. Worst of all, author Lucy Keating shows up in her creative writing course and announces she’s writing a new book, with Annabelle as the star.

So, yes, this is like Stranger Than Fiction in some ways, except that the author-character is the book author (or, at least, a fictional version of the book author). I think it was rather cheeky for Keating to insert a glamorized, fictional version of herself into this book. It was awesome. And then – how often can you say this? – this was a book full of flat, stereotypical characters that I actually liked because they were supposed to be flat, stereotypical characters. Of course, as they rebel against Keating (in ever more drastic ways), they become rounder, more real characters, breaking away from their fictional molds. Once again: it was awesome.

As a writer, I’ve many times had the experience of my characters rebelling against what I planned for them. Keating tells Annabelle at one point, “Elliot. He wasn’t even supposed to be a main character. He was just supposed to be Sam’s annoying friend, comic relief when you were at home. But he kept pushing his own boundaries.” It’s a familiar experience – side characters that suddenly grow into more, you discovering the depths of characters as you write and edit and rewrite and edit. I once spoke to my son’s elementary class about the writing process and I told them that rewriting was my favorite because you learn so much about the characters in the first draft that it’s like spending time with friends in the second. Sometimes the characters you create turn around and show you things about a book that you never even knew were there. And if you force characters away from what they would do organically…often it leads to stilted, flat scenes with stilted, flat characters. I love that Keating has taken that whole experience and turned it into a quirky fictional novel. It was a very fun read.

3 Responses to Literally, by Lucy Keating