Subtitled: The Cosmere Collection – Fiction From the Worlds of the Cosmere

This collection of stories and novellas all take place in the giant world of Cosmere that ties many of Brandon Sanderson’s books together. The collection contains a number of works already previously released in various places, as well as a new novella related to the Stormlight Archive. Additionally, there are notes on the various worlds of the Cosmere, post-scripts about each story from the author, and (in the print edition) illustrations. (As I have the audio edition, read by Michael Kramer and Kate Reading, I of course had to go out for a print edition to check this out. Which turned out to be good for another reason, detailed below.**)

So let me start by saying that I didn’t realize that this collection was made up mostly of already-published works. I thought it was mostly new stuff, and was surprised when The Emperor’s Soul was the first piece in the collection. I immediately looked up the collection online and discovered my error. While I hadn’t read all of the previously published works, I’d read about half, including most recently Shadows for Silence in the Forests of Hell, just last month. I love the idea of all these pieces being collected together, and I’d like to get a beautiful print copy for my Sanderson shelf, but my expectations for the collection were definitely disappointed. 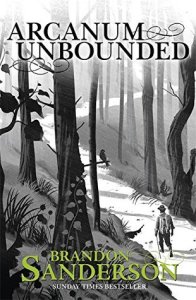 Still, that’s not to say the works themselves were disappointing! Yes, I wanted more new stuff, but even the rereads were lovely. Some of them I hadn’t read in quite some time, and so re-listened to them. Some I’ve read in the last year, and skipped through those parts. Of the new-to-me works, I was happy to be introduced to two new Cosmere worlds, and I’m itching to get my hands on the graphic novel White Sand, of which there was only an excerpt here**. I do wish there’s been something new from the world of Nalthis, where Warbreaker is set, but I guess one can’t have everything, right?

Of course, my favorite part of the collection by far was the novella Edgedancer, the never-before-published piece. The Stormlight Archive has become one of my favorites after my obsession with Words of Radiance, and I’m dying to get the next book, Oathbringer, due out in late 2017. This 40K novella was a lovely bridge piece, showing some of what’s happening in the world post-WoR. Several familiar characters show up, including the narrator, who is the focus of one of the interludes in WoR. Immediately after listening to the novella, I wanted to dive back in and revisit it, and start piecing together all the little connections to Stormlight. It. Was. Fantastic. And totally made up for discovering that most of the collection was going to be rereads for me.

Side-note: Growing up, and growing into my own writing style and skills, I became obsessed with the idea of having all of my books/stories interconnect in some way. I’ve done this to some extent with my novels, setting many of them in the same fiction midsize town and sometimes having their paths cross, or have main characters in one book show up as brief side characters in others. Etc. It’s a minor thing in comparison to the way all these novels, stories, and worlds interconnect, and I admit that this connection is a huge reason that I don’t just love Sanderson’s books, but fully geek out about them. These are the books I was always looking for but never found growing up, and I’m ever greedy for more. If this is your kind of deal as well, I highly recommend getting into Sanderson’s work, and I have plenty of suggestions on where to start!

Works contained in this collection (world in parentheses):
– The Emperor’s Soul (Sel)
– The Hope of Elantris (Sel)
– The Eleventh Metal (Scadrial)
– Allomancer Jak and the Pits of Eltania, Episodes 28 through 30 (Scadrial)
– Mistborn: The Secret History (Scadrial)
– an excerpt from the graphic novel White Sand (Taldain)**
– Shadows for Silence in the Forests of Hell (Threnody)
– Sixth of Dusk (First of the Sun)
– Edgedancer (Roshar)

**In the print version of this book, there is an excerpt from the graphic novel, as well as part of a draft of the original story that was adapted to graphic form. On the audiobook, only the story was read out. I didn’t even know that the actual visual/script portion was included until I got the print copy. Hence, being glad I wanted to check out the illustrations! I got this bonus as well.