Half the Sky, by Nicholas Kristof and Sheryl WuDunn 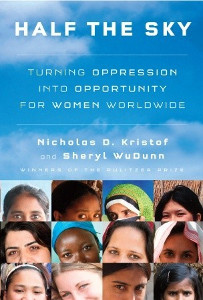 This book explores gender inequality around the world, focused primarily on sex trafficking, violence against women, and maternal mortality. It also discusses potential solutions and gives accounts of some successes and failures in attempts to provide aid in these areas.

Half the Sky was published in 2009, and in my early years of blogging, many of my fellow bloggers were reading and raving about it. I chose not to read it, partly because I struggle with nonfiction generally, and partly because I knew much of the content would be extremely difficult to handle personally. Indeed, I want to lay out from the beginning of this review, there are definite trigger warnings that need to be attached to this book. Half the Sky discusses rape, forced prostitution, abuse, genital mutilation, addiction, honor killings, and gruesome medication conditions/procedures. When I finally picked up the book, it was because I decided that the need to educate myself was greater than my fear. This was a personal decision and by no means am I saying that everyone should make it. For me, it was time – the current climate of our country put me over that edge – and though it took me several weeks, I’m glad to have learned what I could.

I’m honestly not sure how to write this review. The book covered so much material in so little time – a mere 252 pages on a huge swath of topics – that at times it almost felt like the authors were trying to stuff in too much! That’s a flaw I can forgive, though, because the material is so important and crucial, and we have too little focus on it in this part of the world. I admire the authors for their attempt to get the information out there. I do admit that I wish the book had been less biased in places. For example, at one point a footnote sets out to explain a discrepancy between an agency name and its acronym, but instead of just explaining it, it says, “The UN is so wretched at public relations that it can’t even match its abbreviations with its organizations.” Those kind of inflammatory statements undermine the reach of the book, and are especially unnecessary on a subject that is already so charged with emotion.

Still, I feel like despite these flaws, the book taught me much and gave me some ideas about things that I can do from my little part of the world.

8 Responses to Half the Sky, by Nicholas Kristof and Sheryl WuDunn