Last week, the Top Ten Tuesday topic discussed best 2016 releases so far. I haven’t read a whole lot of 2016 releases – release date often isn’t my priority – so I skipped posting. This week is a freebie, though, and I thought I’d highlight those chosen few books (less than ten!) that have definitely so far risen to the top of my 2016 reads. In order of when I read them: 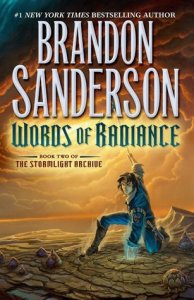 1. Words of Radiance by Brandon Sanderson – I doubt this comes as a surprise to anyone, considering how much I raved about this book. What may come as a shock is that after listening to the near 50-hour audiobook, I listened to it a further five times. That’s right. I spent 300 hours on this audiobook in January and February. And there’s a good chance I may listen to it a few more times before the year is out. Third book of the year will most likely take my number one spot this year. I can’t believe I waited so many years to dive into this one!

2. The Forgetting Time by Sharon Guskin – I spent most of the first quarter of the year reading and listening to rereads, and I’m not counting any rereads among today’s best-of-2016. I started coming out of reread and multi-read mode right around when I dived into this book, which was so carefully crafted that I fell instantly in love. My only regret is that I swept through it so quickly. I wish I’d taken more time to let it linger, because I’m worried I’ll forget it in time.

3. The Raven King by Maggie Stiefvater – I have been dying to get my hands on this book for a very, very long time now. It was my most anticipated release of 2016 and it didn’t disappoint. I sped through the book the day after Readathon, despite my stinging eyes and lack of sleep, and as soon as the audio version was released, listened to it two or three times before moving on to something new. I know that like the rest of the series, I will go back and revisit this one many times to come.

4 & 5. The Sin Eater’s Daughter and The Sleeping Prince by Melinda Salisbury – It’s hard for me to separate these books, as I listened to them almost one after another, each twice. This is definitely my new favorite series discovery of the year, and I’m so happy that Sync YA gave a copy of the first book during one of the early summer weeks. It’s exactly what I needed and I can’t wait for the third book to release!

Interesting to note: Every single one of these books were audiobooks, at least at some point. The Raven King is a mild exception as I had no choice but to read it in print first (print came out a few days before the audio). However, I then listened to the audio several times, and I sort of think of this series as an audio series for me anyway. The audiobooks are really killing it in my books this year!