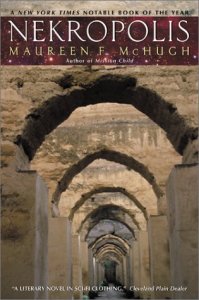 Hariba has voluntarily entered a life of forced servitude to escape the death-homes of Nekropolis, the section of a large Moroccan city where she was raised. She’s working for a rich couple who buy the contract of many such forced-servants, and who also buy what’s known as a harni: a biologically-constructed artificial intelligence near-human. At first, Hariba is repulsed by the harni, who goes by the name of Akhmim, and believes him (it) to be an abomination against God as stated in the Second Koran. Over time, however, she begins to think of Akhmim as human, and as he impresses on her (like a baby goose) and thus begins to put her needs above that of anyone else’s, she starts to fall in love with him. It’s a relationship that can never be equal, and is forbidden both by their respective contracts to their owners, and by Moroccan law.

Two years ago, my family spent the summer reading books aloud together. Each time we finished a book, we brought new suggestions for the next group read, and read a few pages to give everyone an idea of what the book was like. Jason brought Nekropolis to the table, and I was fascinated by what he read. It sounded like Middle Eastern, character-driven dystopia, and I really wanted to read it. The boys, however, went with another choice, and so Nekropolis stayed on my TBR pile for the next two years. (Notably, it’s probably a good thing we didn’t choose this one, as it would not have been an appropriate read for their ages. Jason hadn’t read it, so he was unaware of the adult content.)

Jason had a copy of the book at the time, but gave it away not long after, and my library up north didn’t have any copies of this at all. I was happy to discover that the San Antonio system did have a copy. When I grabbed a couple dozen books from the library for my (failed) attempt at another readathon, I saved this one for last. I worried that perhaps it wouldn’t hold the same allure for me as two summers ago, but I need not have worried. Nekropolis was achingly beautiful.

As I expected, this was character-driven dystopia with a focus on Muslim culture (though in North Africa rather than the Middle East). Hariba, who narrates the first and fifth (last) chapter of the book, is from a poor section of a large city, and contracts to be “jessed” (chemically bound to loyalty toward her employer) after her brother disgraces the family. She is uncomfortable in the large household after Akhmim arrives, though she “loves” her employer and has no desire to leave him. Through forced interactions with the harni, she goes from repulsion, to friendship, to love. After being contractually separated from him, she decides to run away with him, making them both fugitives, endangering her friends and family, and nearly dying due to the “jessing” procedure.

The rest of what follows is fascinating. There are only five chapters, and the three that aren’t Hariba’s are narrated by Akhmim, Hariba’s mother, and Hariba’s former best friend in the Nekropolis. The book follows a single story line, but seen from many viewpoints, including that of a not-actually-human. This was my favorite thing about the book – watching how everything thinks they see and feel things the same way, when they really don’t. Words – love, loyalty, intimacy, betrayal, happiness, belonging, touch – can all mean entirely different things to different people.

This is ultimately a two-pronged story: one about the relationship between two beings who are so far apart in nature that they cannot possibly understand each other, no matter how hard they try; and one about the sacrifices involved in bettering one’s life. It’s a book about otherness, identity, and the consequences of choice. There was heartbreak, but not necessarily heartbrokenness, if that make sense. For each tragedy, there was beauty, and vice versa. Balance and neutrality perfected. This is a book that made me think and think and think, and I relished it for days.

3 Responses to Nekropolis, by Maureen McHugh